In honor of the fact that Playboy Club has already been cancelled, let’s review it!  I’d planned on watching this earlier, what with it being one of the more buzzed about shows of the season, but I got distracted by all of of the other shiny.
Time, however, is not on my or the show’s side, so I guess it’s time to pick up and review this here show of ours and send it on it’s way.  Farewell, Playboy Club, we hardly knew you.  Shame.

Gosh it must have been nice to be pretty in the early 1960s.  All of those opportunities just opening themselves up to you.  From being a Pan Am stewardess*, to being a Playboy Bunny, man life sure must have been grand.  Who wouldn’t want to strut around in a bathing suit sized corset and heels while being professionally ogled and told that you are all that a woman can ever hope to be?

Really networks, really, this is what you came up with?

A quick recap of the pilot episode: Bunny Maureen is new at her job, and when she goes back to get cigarettes, a man follows her.  He tries to rape her.  She kicks out at him, and accidentally murders him with her stiletto heel.**  In the process, she’s seen by Don Draper, sorry, Nick Dalton, an up and coming lawyer, who helps her dispose of the body and clean herself up.  He also tells her that the man she killed was a mob boss.  The mob boss.  Nick’s girlfriend, Carol Lynne, also a Bunny, shows up, finds Maureen and freaks out.  She gets fired for freaking out, then convinces Hugh Hefner to make her the “Bunny Mother” for all of the girls.  Blah blah blah, other stuff happens, whatever.

The plot is not the problem.  Well, it’s not the whole problem.  The real problem is what the plot tells us about the world of the show.

Take Carol Lynne, for example.  She’s the oldest Bunny in the club, the first Bunny, to be exact.  Nearly thirty (gosh, so old!), she’s worried that she’s gotten too old to be a Bunny, and she doesn’t want to give up and go off to some office job.  At first it seems she’s put her eggs in Nick’s basket, dating him with the idea that he’ll be her ticket to respectability after.  But either that’s not her real agenda, or Maureen squashes that pretty quickly.  So what’s a smart, educated, beautiful woman with a hefty savings balance and the powerful men of Chicago under her thumb supposed to do in a situation like this?  Freak out, steal files from her boss’ office, get fired, and go running to Hugh Hefner to get her job back.

Carol Lynne is amazingly talented.  She’s the main entertainment at the club, and she’s a brilliant singer.  It’s clear that she’s the main attraction there most nights, and it’s not just because she fills out a Bunny suit well, it’s because the girl has got some pipes.  But she absolutely cannot see past the front doors of the club to imagine a world where she is not a Bunny.  And when she does get her own back, by begging a man (Hugh Hefner even) to give her what she deserves, she gets a position as the first “Bunny Mother”.  Like a sorority mother, for Bunnies.  Not managing the club or singing professionally, or even doing something else with all of her brains, money and influence.  No, she’s a den mother to a bunch of pretty girls.  And she’s thrilled, because it’s the best thing she could have asked for.  And because she had to ask for it.

The Hef giveth, but the Hef taketh away (your self respect).

Or what about Maureen?  She fights back against her would-be rapist, which is a point in her favor, but then she wilts under the pressure of what she’s done.  Granted, that’s understandable.  Murder is a pretty terrifying prospect.  But she allows herself to be coddled by the attractively bland Nick Dalton, while letting him handle all of the details of removal and cleanup.  Insisting that she can “take care of myself”, Maureen refuses to leave the city, which forces her to become even more reliant on Nick for help.  Because he knows the mob and he knows how they’ll come after her if they know what she’s done.  She is stuck looking over her shoulder and trusting that Nick, and later Carol Lynne, will look out for her, take care of her, and keep her safe.  All while she insists that she can take care of herself.  Riiiiight.

There was, in fact, only one interesting storyline on the show, and it was sadly the storyline that got the least screentime.  Way in the back of the show was a little plot about a married Bunny, Alice, whose husband wasn’t thrilled that she worked in the club.  Throughout the pilot you get bits and pieces of their story, how she wears her wedding ring, even though it cuts down on tips, until Carol Lynne makes her take it off at the end, how her husband is wonderful, but she’s never introduced him to anyone, how she calls him and giggles about how they’re going to get caught, and then we pan over to see…her husband with another man.  Hmm.  Okay.  And at the end of the episode, her husband, (played by the inestimable Sean Maher***) announces the first meeting of Chicago’s Mattachine Society while she looks on in pride.  A homosexual support society.  Now that’s interesting. 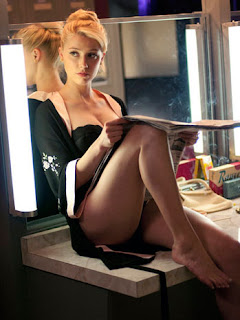 If only the rest of the show could be that interesting, without falling back on old hackneyed tropes and dull, weak characterizations.  Yes, it’s beautifully shot, and the costumes are well-executed, but the concept is as hollow as the credit sequence, where a parade of disembodied breasts and butts gyrate without a face or thought in sight.  Have we really reached a point in our history where we believe Hugh Hefner when he tells us that the Playboy Bunny is the woman of all of our dreams, not just men’s dreams, but women’s too?  That the Bunnies are actually symbols of liberation?  Because they’re not.  Really.  It’s a show full of Playboy propaganda, designed specially to show the best of the best of the Playboy brand, and gloss over anything shady that ever may have happened in one of those clubs.

Well, no.  I reject that.  And apparently so did everyone else.  So bye bye Playboy Club.  Don’t let the door hit you on the tail on your way out.

***Sean Maher (Firefly, Warehouse 13, other stuff I care about less) recently came out as gay himself.  You can read his interview with Entertainment Weekly on the topic here.  Personally, it made me look at his character on this show a little more closely, though from what I could see, and what I’ve seen of his prior work, he’s just a damn good actor.  Nothing more too it.
Posted by Unknown at 3:34 PM