The Complicated Feminism of River Song

For the 3% of you who've managed to be on the internet and not know what Doctor Who is, it's like this. The Doctor is a 900 year old time-traveling alien who looks quite human, he likes to pick up human companions to come with him on his adventures, and he goes around the universe righting wrongs and mucking up the timeline in his TARDIS (a spaceship that just happens to look like a 1960s police public call box). Got it? Good.

The thing is, the Doctor's always a man, and his companions are pretty invariably young, impressionable women. While this makes for pretty great television (next year will mark the 50th anniversary of the first episode), it doesn't really make for great feminism. We've got an old white man swanning around the universe, fixing everyone's problems, telling people what to do, and bossing around his young, pretty female assistants, who always look at him like he hung the moon.

Now, please remember that I like this show. More than like. I love it. But I do have some problems with it, and only recently has it started to address those problems. (Apparently all those letter writing campaigns have finally paid off.) For instance, in the more recent seasons, the companions have been more active, more equal, and generally more interesting.

But most importantly, we've gotten River.

As someone who has long watched Doctor Who, and long longed for more feminist characters on television, I greeted the arrival of Dr. River Song on my idiot box with something akin to miraculous wonder. She was just so damn...cool. She was a Doctor in her own right, of archaeology, sufficiently badass to pass any of my silly tests, and the Doctor clearly trusted her--there were even hints that she might be the Doctor's future wife! I was very, very much on board with River.

I continued to be on board with River for a long time. I mean, she's really, intensely awesome. Give her a chance to sass the Doctor and she will. She can drive the TARDIS on her own, and even manages smoother landings than he does. She's a femme fatale with a quick wit and a quicker gun, and I loved her.

Again, don't get me wrong. Season 6 is awesome in its own right, and well worth watching if you haven't already. But Season 6 got us deeper into River's backstory, and I'm sad to say that I'm not totally cool with what we found there.

I could go through all of the details of the events of the season, but if you already know then you understand, and if not, go wikipedia it. I'll wait.

Okay, the problem with River in Season 6 is simply that none of the decisions she makes are her own. Think about it.

In fact, the only two independent actions she takes in the whole season are to save the Doctor. And the second time he neither thanks her nor even really acknowledges it. He goes so far as to marry her to get her to kill him again properly, which some might call a little excessive.

And what we find out about her parentage and background makes her even more of a frustrating figure. Being Rory and Amy's child (two of the Doctor's companions) means that she has literally been on the Doctor's radar since before she was born. In addition, she's a time-traveler. He knows her future, just as she knows his. While this should give them some sense of parity, it doesn't, since he is much more likely to act on his knowledge than she.

But most importantly (to me), I hated Season 6's River because suddenly everything she did, everything she was, was all about the Doctor. Everything. I have nothing against love, but it felt excessive, forced, and kind of...freaky.

She wasn't my badass Dr. River Song anymore, she was River, the Doctor's Wife. And I'm not cool with that. The River I love doesn't need anyone else to define her, not even a man as awesome as the Doctor.

I hold out hope for the future of this character, that we can move away from her all-Doctor all the time persona, but I have to say that it left me disappointed and cold to see her painted this way. Love is grand, but obsession less so, and I want an awesome woman to look up to who doesn't need anyone else to know how awesome she is. Is that so much to ask? 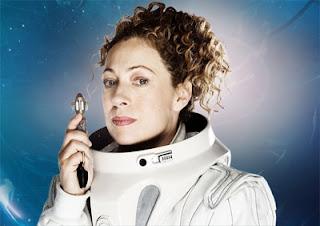 Note: This article is a birthday present for the lovely and kickass Amy Gentile, who really wanted me to write about River Song. Amy, I'm sorry I ended up being so hard on River! I really do love her! Honest!

*The season count reset in 2005 when the show came back from a 15 year break. This is known as the start of New Who, though the continuity remained largely the same. There was a 1996 made for TV movie, but we don't like to talk about that.
Posted by Unknown at 7:53 PM