Joss Whedon is cool. I mean, my last two posts have literally sung his praises, and I'm positive I'm going to sing them again in the future. But I have beef. Specifically, I have beef with Joss Whedon's constant use of Waif Fu.

What is Waif Fu? Well, it's when a young girl, small, slender, pretty, miraculously kicks the ass of man much bigger than her. Maybe she's mystically strong, maybe she's just really good at judo, maybe everyone she beats up secretly has brittle bone disease. Whatever. It's when you see a tiny hot chick beating up Rambo.

And Joss Whedon pretty much invented it.

I mean he didn't actually invent it. Men have been writing about weirdly unmuscled superpowered women who can beat up men (until the women inevitably need to be saved) since the beginning of time. Just take Athena. Or Wonder Woman. But Whedon's really made this genre his own. How? Well, look at pretty much everything he's ever written.

Buffy the Vampire Slayer
While its ratings weren't actually all that great when it aired, no one can really deny now that Buffy was an important cultural moment. And why wouldn't it be? A cool show about high school kids fighting evil in their hometown, full of quips and realistic relationships and a very healthy sense of irony, it was always destined to be everyone's favorite thing.

The problem with Buffy came from, well, Buffy. She was really tiny. I mean really, really tiny. And it was funny at first, a good joke like when Ms. Calendar said, "Buffy's the slayer? But's she so little!" Or how she constantly was being underestimated. Some even posited that that was the point. That slayers had to be tiny women so that they would be underestimated. Sure. I can kind of buy that.

But here's the thing. Muscles aren't meaningless. I could buy that Buffy was mystically strong and that size didn't matter, and that this was a riff on normal horror archtypes, if it weren't for this. 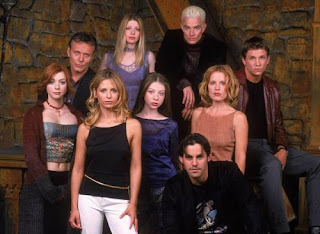 Take a good look at those women.

After Cordelia left the show in Season 3 (and Charisma Carpenter is by no means large), the largest female character, and I mean physically largest, was Tara, who is, at most of average height and below average weight. And Whedon himself has commented that he originally did not want to cast Amber Benson as the shy and retiring witch. He was leaning towards finding an actress who was more, you guessed it, waify.

Buffy's small. Sure. Willow's little. Whatever. Kendra had muscles, even if she was a tiny person. Faith was almost buff. Anya? Okay, starting to see a trend here. Dawn...well, at least she started getting taller. All those baby Slayers? Things are starting to get a little weird.

Again, there could be an explanation for any one of these castings. But put enough of them together and you seem to see that Joss Whedon has a thing. Specifically, a thing for tiny women kicking ass.

Which is a little weird. Not exactly bad, yet, but weird.

Firefly
Now, Firefly was Joss Whedon's passion project after Buffy, and it remains my favorite thing that he's ever done. It's a brilliant portrayal of a dystopian future, a beautiful space opera, contains amazing developed characters, and had a...Slayer?

Okay, River's not a Slayer. But you can forgive the comparison. She's amazingly strong, despite having nearly no muscle tone (or rather, she has as much muscle tone as a ballerina, which is nice, but not enough to kill a man), she's deadly accurate with a gun, and she's a sleeper agent for a shadowy pseudo-governmental agency who experimented on her and drove her crazy. Well then.

While Firefly is a great show, the sudden appearance of River's Waif Fu didn't go very well with the story. It felt tacked on. Here we are, following some space thieves and their relationships, dealing with the fact that River is basically a really smart child, which was cool and pretty compelling, when all of a sudden she's laying waste to a room full of men.

Summer Glau is a dancer, and a damn good one, so while that fight is gorgeous to watch, and very well choreographed, it's not very believable. Buffy at least had mystical superpowers. River Tam had mental programming. I'm not saying brainwashing isn't strong, I'm just saying I don't think it lets you ignore biology. Muscles still matter.

And she doesn't really have any.

Dollhouse
At this point, I think we'd all noticed a pattern. By far the most creepy of Joss Whedon's shows, Dollhouse continued his trend of having implausibly small women beating up much larger men with increasingly flimsy reasons. Buffy had superpowers. River had brainwashing. Echo had...what? Enhanced reflexes? 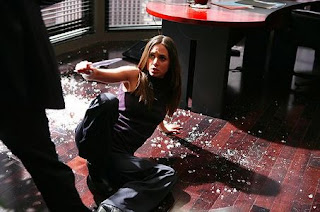 They tried to explain it here, with the computer wizard capable of programming any personality or physical characteristic into the "dolls"* noting that he could open up more reflexes in her brain to make her more receptive and better in a fight. Sure. But that doesn't explain why 100 pound Eliza Dushku was supposedly fighting the NSA trained secret agent and winning.

I say it again, because it's true. Muscles matter.

So, What is this, Some Kind of Fetish?
As I said before, I really love Joss Whedon. I think his shows are great, and I think that he has a real talent for talking about issues that matter to women. I also, however, think that sometimes, he doesn't quite hit it on the target.

Look, we've all got baggage, and we've all got our things. Apparently Waif Fu is his. While he's amazing at creating strong female characters, like Zoe and Cordelia and Faith, what he's not as great at is understanding that there's a little more to it than just grabbing a hot chick, giving her some ass kicking ability and throwing her into a story. We have to believe that she can really do it, that she can really fight and that she should really fight.

But I don't mean this as a discouragement to Mr. Whedon. I think it's amazing that he writes about women at all. That out of the shows he's made, two have centered on women and two on men, I think that's phenomenal. I think it's great that his passion project is to someday direct Wonder Woman on the big screen. Rock on, brother.

I just hope that when he does, he remembers that Wonder Woman is supposed to be strong. Not a tiny person and strong, just strong. She's an Amazon. Don't let me see any of that Waif Fu, okay?

*Living people whose minds have been wiped so that they are just a shell into which an entire life can be downloaded. Which is a cool idea that the show didn't really explore fully.
Posted by Unknown at 8:12 PM