Surprisingly (or not) there were a few complaints about my last Real Women Kick Ass list. Not because of the content, mind, but because of the women I left out. (If you haven't read it, SHAME ON YOU!  Or, just read it here.)

While I didn't agree with all of the new suggestions, there were a couple of gems in there that made me think that I probably should make a new list.

So, here you go. Real women who kick ass, the sequel.

Katee Sackhoff, Battlestar Galactica
I genuinely don't know how I missed putting Starbuck on my list. I have no idea. But I'm here to make up for that.

Katee Sackhoff's role on Battlestar was originally written for, and in the 1970s (terrible) series performed by, a man. Starbuck, her character, is essentially an air force pilot. She's one of the original space marines, engaging in daily space battles with a deadly robot enemy, and always working to come out on top. Reasons we love her? Because Katee Sackhoff, for the run of the show, really looked like a soldier. No soft arms or pretty curves, this girl was all muscle. She looked like she could bench press her ship. Her character was a tough, flawed, and intensely emotionally scarred woman and Sackhoff made sure that her performance realized all of that. Oh, and a reason we loved the show? Because Starbuck was never the token girl, or even one of the guys. She was just a soldier, like everybody else. Gold freaking star. 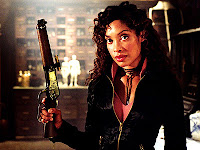 Gina Torres, Firefly
I noted Gina Torres last time as an honorable mention, but she really does deserve her own entry. As the deadly Zoe on Firefly (and the Serenity movie, which wasn't as bad as people keep saying it was, shut up), Torres managed to convey both strength and a beautiful femininity. She was always a warrior, but also a wife. Her marriage to awesome husband Wash (played by the amazing Alan Tudyk) was an example of how two people can come together without gender boundaries getting in the way. She's a badass. He juggles geese. They're both competent, wonderful people who love each other very much. She's just a lot better at fighting. And Torres performance really sold it. In every frame she exudes strength. When she wields a shotgun, you know she knows how to use it, and when she punches someone, you feel kind of bad for the extra. 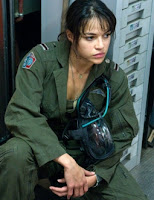 Michelle Rodriguez, Everything she has ever done.
This one's kind of a gimme, I'll grant it. Michelle Rodriguez is legitimately crazy, arrested multiple times for assault, drunk driving, and other various anti-social behaviors. So maybe my ability to believe her when she plays out of control badasses is a little tinted by the fact that I don't think she's acting very much, but still. Damn do I believe her. In Girlfight (pretty decent movie, worth a watch, way better than Million Dollar Baby), she's a very believable boxer, all muscles and mean. In Fast and Furious, you can see her doing jail time and coming out just fine. In Avatar she makes a damn good space marine.

Sure, she plays a type, but at least it's a cool type, and at least we believe her. And by her own admission, she plays badasses because they're the most interesting characters. When interviewed about her acting choices (and why she keeps dying in her movies), Rodriguez explained that she didn't want to play the girlfriend, or the funny sidekick or the best friend. And really all that was left was playing psychos.

Katey Sagal, Sons of Anarchy
Short story: I love her.

Long story: I saw Katey Sagal on the street once and genuinely wondered if she was packing heat. You just never know.

Sagal is one of those cases where you can think you know an actress, and then all of a sudden they do a new role, and you realize that you never knew them (or their range) at all. From Peg Bundy to Gemma Morrow, there's a hell of a switch. As Gemma Morrow, I entirely believe that Sagal is a biker momma who can beat me half to death with a skateboard outside a grocery store if I looked at her husband funny. I would not ding her car in a parking lot. And I would definitely not ever badmouth her motorcycle club. She's brawny and brainy and all over sex appeal. But most importantly, Sagal managed to play a badass woman who went through something horrible*, dealt with her feelings of vulnerability and rage, and came out much stronger on the other side. How can you not want twenty more of her on tv?

Carrie Ann Moss, The Matrix and Memento
This one's a little more simplistic. Remember Carrie Ann Moss? Remember Trinity? Yeah, she was ripped. Fantasy world or not, that was a chick who I was pretty sure could beat me up. I knew she could beat Neo up. Moss looked like she could eat Keanu Reeves for breakfast. In Memento, it's even more noticeable. Though playing an unstable bartender trying to get one over on Guy Pierce, Moss still comes off as cool and hardcore. Probably because she's so physically strong, it informs the physicality of her characters. They don't just walk, they stride. She never floats. She damn well marches. If there were a real cyber-revolution out there, I'd follow Moss anywhere, because I'm pretty sure the alternative wouldn't be worth living with. 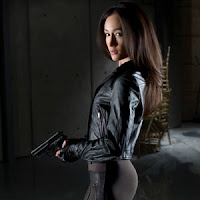 Maggie Q and Lyndsy Fonseca, Nikita
As I mentioned last time, Maggie Q is a tiny person. But, as we (or the internet, at least) know, she's also a martial arts expert, and really really good at making people bigger than her beat up. So she at least gets a mention for that. While I wouldn't ever look at her and think "Ooh, scary!", now that I know, yeah. She kind of freaks me out.

Lyndsy Fonseca, on the other hand, I actually think looks pretty buff. Not hardcore buff like some of the women on this list, but as far as the "women on television who I think could probably kick my ass and/or play Wonder Woman" list goes, she certainly gets a spot. Her takedowns on Nikita don't use too much movie magic to make it look real. She struggles, she sweats, she make unattractive grunting sounds, and when she manages to get him down, I buy it. Fonseca is one to watch.

Maybe next time I'll come up with a list of women who I don't buy as action heroes, but for now I think I've spent this topic. LIke I said, I don't demand that everything I watch be completely and utterly feminist at all times. Hell no. It's more that sometimes, every once in a while, I want to watch a movie and actually believe that what's happening could happen, without the help of special effects and wires and cgi. I want it to be real. Because if it's real, then that means that I can do it too.

And that's what I really want.

*SPOILER: In the beginning of Season 2, Gemma was gang-raped as a scare tactic to break the club apart. By choosing not to say anything and only reveal what had happened at the right time, she was able to bond the club together closer than ever, and destroy the men who hurt her. So, yeah. Badass.
Posted by Unknown at 9:44 PM