Sorority Boys: Excuse Me, I Have to Punch Something 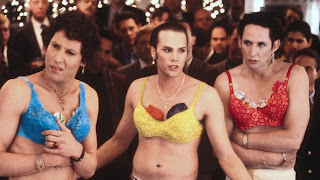 The movie in question is a little seen early 00's comedy called Sorority Boys. It's very much in the vein of The Hot Chick, another comedy with positively dismal messages for women. The plot is simple enough. Some misogynistic frat boys get kicked out of their frat and have to dress up as women and join a sorority in order to clear their reputations. In the process they learn how hard it is to be a girl, and everything gets better. Blah blah blah. Whatever. I watched it because I was bored and I like Michael Rosenbaum. Tell me he wasn't the best Lex Luthor ever? Yeah. I thought so.

Besides, sometimes cheesy comedies like this have proved to be pretty awesome. The potentially terrible She's the Man was surprisingly fun, and Drive Me Crazy remains one of my big guilty pleasures.

This was not the case here.

To start off with, the boys don't just dress up as women, they dress up in ugly clothes, and are therefore mocked by men and women alike. When they are accepted into a sorority, it's the "feminist" sorority that they'd mocked before, where all the girls are kind of freaks, and the feminism is played up for laughs. Thanks, guys. 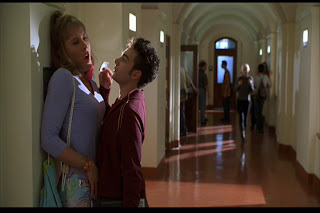 Furthermore, they make a big point of talking about how ugly they are as women. Michael Rosenbaum's character in particular, Adam, is mocked for having a big ass. So much that he becomes inordinately sensitive about it. This is supposed to be hilarious. He has to wear heels, and falls over a lot. Inappropriate guys hit on him, assuming that because he's ugly, he's an easy target.

Now, I get a little of what the screenwriters are trying to show, I think. I think. After all, women do have insecurity about their bodies, and they are targeted by sketchy men. These are our realities. But I hesitate to think that these are our primary issues. Going on, however, there was a much, much bigger problem.

For plot reasons, Adam has to break back into the frat house. To do so, he goes in during a party, and convinces a young pledge to take him back to his old room so that he can retrieve something. This is pretty standard comedy territory, so it wasn't that cringe-inducing to watch. He set up with his friend, Dave, the main character, ahead of time that they had an emergency signal and everything.

Unfortunately for Adam, Dave spends that night trying to (while in girl drag) get off with their sorority sister. So when Adam discovers that the frat guy has roofied him and tries to escape, there's no one to help him. Adam falls to the ground in the dorm room, with the frat guy standing over him, and the screen goes black.

The next morning, Adam gets up, adjusts his skirt, and has to do the walk of shame out of the house. It's awful. Really, really awful. It's made even more awful because it's supposed to be funny. He gets back to their sorority house, and instead of being sympathetic, or apologizing profusely for missing the emergency signal, Dave blames Adam for being jealous of his prowess with women. Then they fight. And Adam spends the rest of the movie having trouble sitting down.

There are a few other plot points, like where Adam, a football player, turns the sorority into really good football players for the powerpuff league, and them clearing their names and all. But for me, there was really only one moment after that. 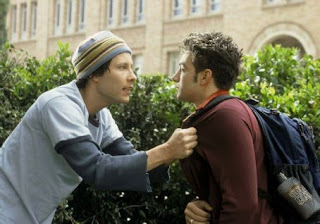 At the end of the movie, when they've been unmasked and restored, Adam goes to his frat brother and asks him point blank if anything happened. Adam is nervous, unhappy and clearly still affected. The frat brother winces, and it cuts to a flashback. A flashback of the rape. Which is supposed to be very funny at this moment. And then the frat brother lies and says nothing happened.

I nearly punched my computer.

There are a lot of things wrong with this storyline, obviously, but to my mind, two of them stand out. One, it made rape funny. Rape is not funny. I feel like I shouldn't have to say that, but I do. How many comedies have made jokes about prison rape? Even my beloved Sons of Anarchy had a whole subplot about prison rape that was played for laughs (though they did deal with rape in an incredibly realistic and compelling way in other stories, so I don't totally hate them for it). I don't care if you're Family Guy, intimate violation is not something we laugh at.

Two, it made rape into something that happens to women. Everything that happens to the boys in the movie, from shaving their legs to being hit on by skeezy guys at parties, is put off as "part of the female experience". Well, apparently that includes rape. And, yes, for some of us it does. But by no means does that mean it should. By presenting rape in this fashion, the filmmakers have normalized it. They've also gendered it, as something that just happens to women, or men dressed as women, which we know just isn't the case.

I do not deny that rape is a thing that happens, and I actually think that it has a place in a movie like this. It's like that great Gavin de Becker quote, "Men and women live in different worlds. At core, men are afraid women will laugh at them, while at core, women are afraid men will kill them." We need to deal with this.

What we don't need to do is laugh at it.

If this plot had continued and it had been dealt with as the serious, life-changing event that it surely would have been, this might be one of my all time favorite movies. But it wasn't. Like the experiences of so many real women, it was trivialized and laughed at.

And this is the part where I confess something. When I was in college, a casual friend of mine got very drunk and told me that she had been raped a few weeks ago. She just blurted it out as I was putting a blanket over her, and I had to sit down. It's not something you expect someone to ever say to you. It's not something people talk about. It was a friend of hers, she said. And she didn't blame him. He was going through a hard time. She just needed to tell someone. And then she threw up.

I don't know if she ever told anyone else, and I'm sorry to say, I wasn't much help to her. I tried to talk about it, but she didn't remember telling me, and, well, I hate to say that I left well enough alone. I shouldn't have done that.

Rape is not something to trivialize. It matters. So when I see a movie that takes the same brutal event my friend went through and turns it into a joke about guys dressed as girls getting the "whole female experience?" I see red.

I don't want to live in a world where this is something to laugh about, and I don't think I have to. It's as a concerned citizen that I call out today to all of the writers, directors, the people making music, anyone associated with any cultural conduit: Send a message. Rape is not funny. Rape is never okay. And rape does not have to be part of the woman's experience.

And to my college friend, I'm sorry. You deserve better. I hope you find the courage to speak out again.
Posted by Unknown at 3:00 PM