The Links of Spring (She-Hulk, Samus Aran on Gay Marriage, and More!)

Happy Linksday, everyone! I've been traveling a lot back and forth this week, so I feel like it's my turn to enjoy a well-earned rest. While I chill out and snooze, enjoy some fun links from around the webernets.

1. In gosh-I-wish-I'd-said-it-this-well news, Jason Richards over at The Atlantic wrote a fantastic piece on Smurfette and the maiden/crone dichotomy last year, right when the movie was coming out. Check it out here (and try not to think unkindly of my version, which is a touch less scholarly!). 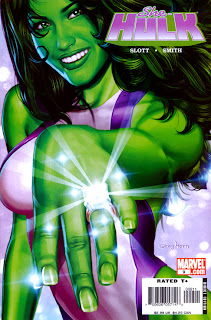 2. In hey-that-ties-in-nicely news, it turns out that actress Angie Harmon of Rizzoli and Isles really, really wants to play She-Hulk. And I have to say, I can see it. Plus, She-Hulk is coming up in my series on female characters who should totally have their own movies, so it's nice to see that there could be some traction here! Check out the interview here.

3. In the-internet-is-hilarious news, the fabulous tumblr page "Is This Feminist" is my new favorite thing. It shows pictures of women in stock photos, then asks the all-important question "is this feminist?", coming up with wonderfully ridiculous answers. Check it out here. You're welcome.

4. In important-work news, there's a new safehouse for victims of human-trafficking opening up in the Boston area. Amirah, the organization, is committed to ending human-trafficking, and giving the women involved a safe place to stay and recover, as well as to raising the profile of modern slavery and making it an issue we can no longer ignore. Check them out and support them here.

5. In yeah-yeah-shut-up-about-the-Avengers-already news, the sequel has been officially announced, and Entertainment Weekly did a short piece about whether or not another woman might join the squad, and if so, who. Check it out here.

6. And in well-that's-certainly-a-way-to-raise-the-issue news, Timothy McSweeney has written a fantastic piece from the perspective of Metroid's Samus Aran, about the importance and value of gay marriage. Check it out here, it's well worth the read.

7. Finally, sex educator Laci Greene talks about the silliness of masculinizing traditionally feminine products like loofahs and irons. It's hilarious, and she's lovely.

That's all for this week, but tune in on Monday to catch a continuation of Make It a Movie May, bromances versus romances, and more!