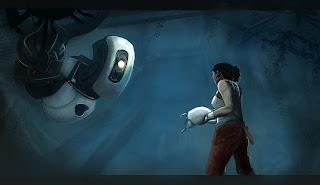 I cannot tell you how happy it makes me when something finally meets my standards.

I’m not saying that my standards are higher than everyone else's (though, they usually are, at least when it comes to ladies in media), I’m just saying that they’re high, and it makes me crazy happy when something actually comes along and meets them. Says hi to them, and makes them happen. I do a Snoopy dance.

So, it may not shock you to know that I did a full on Snoopy jam fest over Portal.

Simply put, Portal’s pretty much the best game I’ve ever played, from every standpoint. More complicatedly put, I love it for a few reasons (only one of which is relevant here). One, it’s super duper fun. Two, it’s a unique world, mechanic, and type of gameplay. Three, the game is actually out and out funny, which is somewhat of a rarity in FPS games. And four, it actually passes the Bechdel Test.

Guess which one of these we’re gonna talk about? 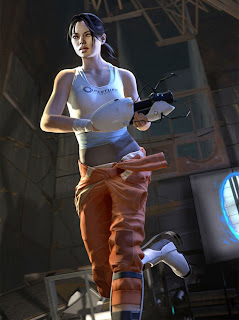 The Bechdel Test, if you’ve forgotten or never knew, is a deceptively simple way to gauge how important female characters are to the story you’re watching. Since women make up roughly half the population of the planet (and if not half, then actually more, according to science), it seems like this wouldn’t be hard, right? Women are totally relevant to all kinds of things, so passing this test should be super easy.

Wrong. The test itself is very simple. The media in question must have two or more named female characters. “Nanny” or “Grandmother” or “Barista” do not count as names. These two female characters must then talk to each other for 60 seconds about something other than a man. That’s it.

Ninety percent of the movies that have come out in the past thirty years have failed. Seriously. There’s a list. And it doesn’t even use the 60-second rule.

And videogames are even worse. Forget the difficulty of having your female characters talk about something other than a man, try having two female characters even talk to each other! Most videogames have zero to one women in them, and these women are usually nameless prostitutes, peasants, or otherwise useless to the test. If they are full characters they are babysitting missions, enemies, creepy children, or “badass lady adventurers” who are just fantasy fuel and there to make out with the lead.

If it’s a rare female led franchise, then there’s already a woman, and clearly no need for her to talk to any other women, right? Quota filled.

Here’s where we get to Portal. In this game, which is fun and challenging and extremely well made, we have not just a female protagonist (Chell), who is neither sexualized nor infantilized by the story, but we also have a female (or female-ish, since she is a robot) antagonist: GLaDOS.

It’s hard for some people to understand exactly what constitutes “passing the Bechdel Test”, because they misunderstand the reasoning behind it. Does Portal actually pass? Because Chell is actually mute, so it’s not like they’re having a conversation you can hear. They don’t ever “talk”. GLaDOS monologues, and Chell shoots things. It’s a very unhealthy relationship.

The important thing is that they’re important. These are two women, or female-identified robots, who are integral to the story, and carry out the plot without any need to dither into nothingness. They are crucial. Even in Portal 2, when GLaDOS has been defeated and you carry her around as a potato (it’s super hard to explain, just go with it), you’re still in conversation with her. There are other characters now too, even a new antagonist. But it’s okay, because the primary female relationship has not only endured, it’s changed.