I’ve done a lot of ragging on the movies so far this year, from Snow White and the Huntsman to Dark Shadows, to the impending gloom I see settling over my enjoyment of Prometheus. So I want to take the chance to commend a movie that I quite enjoyed, and that I think did quite well by its female characters.

I’m talking, of course, about John Carter. Yup, that one.

John Carter may have failed at the box office. The reasons behind that could probably fuel a book, but let’s cut them down to the basics of bad marketing, overinflated budget, and terrible release date. The movie itself is perfectly sound and actually quite enjoyable. You can see the 200 million dollar budget, but that’s not to say the movie wouldn’t have benefited from a trim.

Most importantly, though, John Carter was fun. Genuinely enjoyable entertainment about a man plucked from the post-bellum West and flung into a world where the political climate mirrors the war he just finished fighting, and the low gravity gives him the powers of a superhero. That is what I call fun.

More to our point, though, the movie contained a couple of female characters, and the two most important ones basically highlighted the right ways and wrong ways to make a female science-fiction character kick ass.

Let’s start with the pretty one. 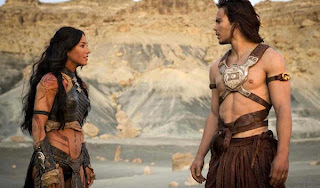 I can’t hate on Dejah too much, because she’s the character saddled with the most expectations in this thing. Not only was the original story entitled “A Princess of Mars”, but the character has the problem of being incredibly literally a damsel in distress. She’s going to be forced to marry her enemy to save her people, unless she can convince John Carter to save them first. That’s a lot of pressure to put on a character.

Naturally, we now also want her to be feminist.

So strap on a sword and have her spout out some science talk, and boom! Sexy scientist princess lady who can also fight. There you go, female demographic, have a character. 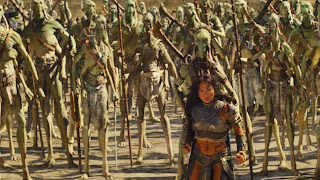 I mean, I appreciate female characters with accomplishments. Like, I love Aeryn Sun, an incredibly accomplished pilot and fighter. I like Sam from Stargate: SG-1, an astrophysicist who can kick your butt. But these characters make sense. They have some history to them, and their skills don’t come out of nowhere. Dejah just grabs a sword, quips off a line, and we’re supposed to believe that she is a better fighter than our Civil War trained hero. Riiiiight.

And, again, it’s not that I hate accomplished women. I just hate it when they’re so clearly thrown in as a nod to “progressive values”. When Dejah picks up that sword, she implicitly says, “Yes, I have been trained in fighting and science and am of high noble rank. But all of that means shit, because my father is going to trade me in a peace deal.”

It doesn’t make any sense, and it’s frankly kind of insulting to the viewers.

Also insulting? Her clothes. Throughout the movie they skirt the edge of “appropriate for desert and also functional-ish”, with a side of sex appeal. Whatever, it’s a sci-fi movie, got to appeal to the nerd boys somehow, I guess. But when they later show her prepared for her wedding, in a dress that is really just a bikini with delusions of grandeur, the movie makes a point of telling us that her clothing is skimpy.

Literally. She mentions that the clothes are “a little vulgar for my taste”, and makes her face go eww. What that fails to recognize, though, is that the filmmakers put her in that outfit just so that we could look at her in it. Then they added in a line to make sure we know that they still respect women. The costume serves no purpose in the story other than titillation. You don’t need it to tell us that her fiancé is skeezy, we got that when he killed all those people. You don’t need it to tell us she’s attractive. We have eyes. The only reason to put her in that costume, then denigrate it, is to make it okay for us to ogle her, without feeling like bad people.

So Dejah, for me, falls flat. She’s too self-consciously “feminist”, and is actually not a very empowering character at all.

Constrast her, though, with Sola.

Sola (the alien with an arc)

While Dejah looks perfectly human with just some funky henna, Sola is from a different race entirely. She’s a Thark, a sort of lizard-insect-mammal kind of thing, with four arms and tusks. She’s also pretty freaking cool.

Sola starts the movie as an outcast among her people. She’s too compassionate, when the Tharks actually pride themselves on being heartless.  They’re a warrior race, and she’s a carer by nature. When she meets John Carter, she tries to help him, and is punished for his disobedience. She takes her punishment, because she’s sure she deserves it, and tries to fit into the horde as best she can. 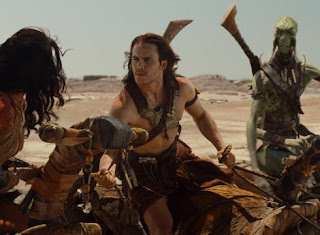 Sola is eventually sentenced to death for John Carter’s insolence, and when he escapes, she goes with him. She still intends to die, though, just in a more religious fashion. What slowly happens is that Sola comes alive. She begins to see her compassion and nurturing nature not as a death sentence, but as something that can make her just as fierce as the rest of the horde. She cares for John Carter, and lets him care about her. She goes to help Dejah, and when she needs to, she overcomes her fears and returns to the horde.

In the arena, fighting for her life, she doesn’t hesitate to protect herself, but she also doesn’t stop being the amazing, caring person she can be. She puts herself in danger to save others, and shows that she can be just as fierce a warrior as anyone else, without having to sacrifice her love and relationships to do so.

What Sola does, is show us a new way to be feminine and strong, and that’s pretty cool.

What Dejah does is show us what men think feminine strength should look like, and that’s less cool.

So what conclusions can we draw from this? 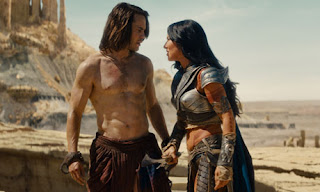 Well, there’s no going back into the past and forcing John Carter to have made more money, unfortunately. It flopped, and it flopped hard, so we probably won’t ever see the rest of the series. Which is a shame, really, as they’re good stories.

But from a meta perspective, this movie shows us why we need to keep paying attention to what we see. Some things that are presented to us do nothing to extend the narrative. They’re visual bubblegum that neither help women, nor expressly hurt them. There so that men can feel good about themselves, these characters pervade most media.

And then there are the other characters. The gems. The ones that make you stop and realize that you understand something different about yourself for having seen them. They redefine the conversation, in new and interesting ways. Maybe they’re not as pretty, maybe they’re a little different, but they tell us something new about who we are and who we should be, and for that I’ll take a hundred Dejahs.

I’d just rather not have to.

[Note: I have no idea what is wrong with the CSS and why the font keeps changing size. Working on it, because a cohesive site is a happy site!]
Posted by Unknown at 9:00 AM