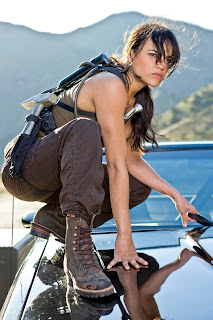 I’ve mentioned this before, but I find Michelle Rodriguez a little personally terrifying. She’s well known in the industry for being knife-fight crazy, and I just maintain that I would not want to meet her in a dark alley. Or on a well-lit road. Or at all, really.

But, I have to admit, I respect the hell out of her.

Michelle Rodriguez has one of the best levels of standard for the roles that she takes. She refuses to take girlfriend roles, wife roles, roles where she’s tangential to the action, roles where she’s a supportive friend. She doesn’t do romantic comedies, she doesn’t simper at home while the men folk sort it out, she straps on a gun and deals with it herself.

But the result of all of this awesomeness is that the characters she plays have a weird tendency to die on her. And that doesn’t seem quite right.

Here we have an actress who has made a career out of always playing strong women who aren’t afraid of a fight, and she’s now known on the internet as “that chick that movies love to kill.” I kind of hate to say it, but I’m pretty sure there’s a connection there.

Our culture is a male dominated one, that’s pretty easy to figure. Aside from the occasional token franchise, like Tomb Raider or One for the Money, most action franchises have male leads. Yes, I have heard of Alien. That’s not the point here.

The point is that in a male dominated action film, where Rodriguez is inevitably cast as the alarmingly convincing gun ho warrior woman, there isn’t actually room for her to succeed. They already have a hero, they can’t let a woman push through ahead of him. So off she goes to the woodchipper.

It’s even worse in female headed franchises. Those films already have a female lead, one who’s just pretty and delicate enough not to threaten male sensibilities even while she kicks their butts, and usually one dressed in a titillating red dress or something (I’m talking about you here, Resident Evil). Meanwhile, MR trudges around in the back, carrying her massive gun and wearing what are actually reasonable clothes for the situation. She has to go.

Because if they let her live, then they confirm that a capable woman with large muscles and a sensible attitude is actually more competent than their male fantasy of a lead, whose legs go on for miles, but can’t shoot for crap and is too worried about posing to know if the zombies are coming. (Sorry, still ragging on Resident Evil. I really don’t like the first one.) 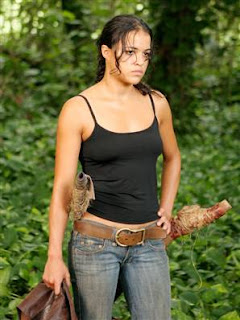 There’s a symbolic importance to Rodriguez’ deaths. Every time she dies, it’s like the world is saying, “It’s okay. I know she was scary, but here’s a much more suitable fantasy object. Shh, it’s going to be okay. The bad lady’s gone now.” And that’s crap.

When she died on Lost, people cheered (well, until Libby got shot too). They cheered because most people hated her character. Her character who was strong, and sassy, and everything that we say we want our female characters to be. She was a little unorthodox, sure, but she had all the hallmarks of a great character. Able to take care of herself, willing to make tough decisions, take no prisoners attitude. And people cheered when she died.

Look, I’m not trying to start a fight about Lost and whether or not Analucia was a bitch. I don’t care. The point is that, bitch or not, the characters that Rodriguez plays are important. They’re the ones who get stuff done so that the Kates and Alices of the world can continue on in peace. They’re the characters who have to die so that our male created narrative can remain.

And I find that sad, okay?