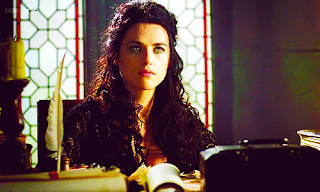 I’ve been talking a lot in the past couple of articles about what makes characters interesting, sexy, and compelling for the long term, and I feel like we’re starting to get a good handle on it. But what about the bad guys? How do you write a female antagonist that doesn’t fall into the all-too-common traps of being femme fatales, seductresses, crazy, or just being a bitch?

Which brings me around to the subject of BBC’s Merlin.

BBC’s Merlin is a wildly ahistorical take on the King Arthur legend. In it, Arthur is a pompous prince (at least at the beginning), Guinevere is a servant in the castle, Lancelot is a peasant with a sword, Morgana is Arthur’s adopted sister, and Merlin is a plucky country boy with big ears. So it’s not the most conventional take on the story.

Instead, Merlin focuses on telling a fun story about young people who are in the process of becoming the people they’ll be in legend. Arthur has to learn how to be a good king, because when we meet him, he’s a prat. Merlin needs to learn how to use his magic to save the kingdom, even though magic is outlawed and he could be killed for it. And Morgana needs to slowly go crazy and evil.

It’s an interesting take on the story, and it works pretty well. Shallow, silly, and at times just bizarre, sure, but there’s something really compelling about seeing the transformations of these characters.

Which brings me specifically to Morgana (played by Katie McGrath), because she is my favorite character in this version (except maybe Gwaine, who is hilarious), and she has the most interesting arc.

How do you make a villain? 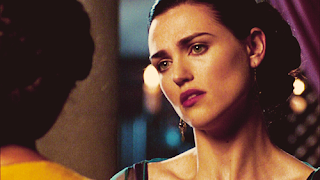 In season one, Morgana is a faithful member of King Uther’s household. She knows that as the King’s ward, she’s probably going to have to marry his son at some point, and both Arthur and she see this as an inevitable if dull progression to their lives. She loves Uther, and Uther loves her, even though she is disturbed by the intensity with which he punishes magic users in the kingdom. She wants to make him proud and to be the daughter he needs.

Then she starts having nightmares. Nightmares that are actually prophecies, and prove that Morgana has the one thing she most fears: magic.

Morgana’s progression into magic is part of a larger story being told, about Merlin and his destiny helping Arthur become the greatest king Albion has ever known. Morgana is poised as the villain in this story, the force standing against Arthur’s ascension and therefore against Merlin. 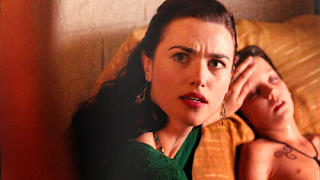 It would be easy to write her off as yet another shrill harpy working against our boys. But that’s where you’re wrong. When Morgana starts to turn against Uther and Arthur, it’s not because she decides that they’re terrible and she wishes she were more powerful than them, it’s because she genuinely thinks they’re wrong. And Merlin agrees with her. They work together to save a small druid boy from Uther’s draconian rulings, only for Merlin to discover that the boy is actually Mordred, and will someday kill Arthur.

Morgana becomes more and more enmeshed in her magic, but she never starts out wanting to hurt anyone. As she continues into the magical community, she sees that Uther’s reign has wreaked havoc, and decides that he is an unfit ruler. That’s when Morgana begins to go evil.

But the thing is, she’s not wrong.

Uther’s a good ruler as long as he thinks his people are good. When he suspects that they have any inclination towards magic whatsoever, he turns on them and demands the harshest retribution. Magic hurt him in the past, so he lashes out at it. But Morgana, Merlin, and the audience understand that magic is really just power. It is what you make it. 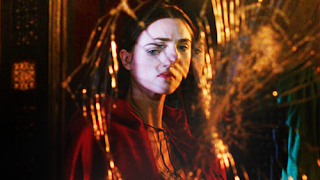 Morgana’s quest for power does drive her slowly crazy, but it’s the insanity of constantly looking over her shoulder. Of seeing what Uther can do and being disgusted by it, but sitting at the table with him and having to smile. I’m not saying that everything she does is provoked, and she never has a moment of sheer villainy, what I’m saying is that I understand how we got here.

Her arc makes sense. As she gains more magic, she learns more about what Uther has done to magic users, and her heart grows sad and then angry. She turns away from the life she knew, because she doesn’t trust it. And when she finally discovers that Uther is actually her father, and that he took her in because he felt guilty for what had happened to her parents, she is enraged. 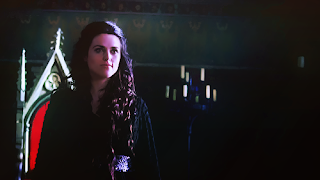 All she wants is a world where magic can be free. But unlike Merlin, who has the knowledge that helping Arthur will create that world, she cannot see a world where she is free and Arthur rules. So she lashes out, and slowly becomes evil.

That’s how you do a villain. It’s X-Men’s Magneto, or Castiel in season 6 of Supernatural, or Walter White in Breaking Bad. You show what the character wants, and you show that it’s a good want. Then you make them go after it in the worst way possible, and watch the audience cringe.

Morgana isn't the villain because she's an evil seductress enraged by the goodness of our hero. She's not a villain for evil's sake, twirling in a big chair and stroking a cat as she watches the world burn. She's just another person who thinks she's doing the right thing. That's what makes her interesting, and that's what makes Merlin tick.