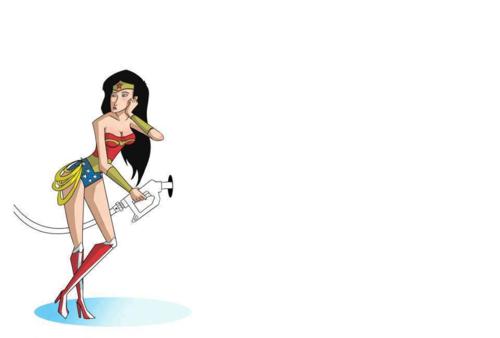 Well guys, we made it through another week. It was hard, but we persevered.

So have some links and cheer up, okay?

1. In pretty-sure-that's-not-the-goal-here news, the creator of the new Lara Croft videogame prequel brags that this is a Lara you'll "want to protect". Umm, isn't the appeal of Lara Croft that she's badass and needs no such protection? Read the whole interview here, and join me in explaining that just because she's wearing pants, it doesn't make her feminist. (Though it helps.)

2. In leave-her-alone news, Anita Sarkeesian of the Feminist Frequency and her oft-cited Tropes Against Women series is making another series, this time about videogames. She has a kickstarter to fund the project, but unfortunately, she's been faced with a disgusting display of hate from the male gamer community. Read about it here, then pop over to her kickstarter page and toss her a few bucks. It's a very good cause.

3. In huh-never-thought-about-that news, Soren Bowie over at Cracked.com has noticed a very strange pattern in 80s sitcoms: the moms are all dead. Now, before you go shouting exceptions to this rule at me, go read his article, and think about what that might have meant, that just as women were starting to make a mark in the workplace, sitcoms decided they were dead weight.

4. In umm-good-I-guess news, Kym Worthy is a Detroit prosecutor who is determined to test all of the rape kits that have backed up in Detroit's system, and solve those 11,000 rapes. I'm not saying that Ms. Worthy's cause isn't good, I'm more saying, "We have 11,000 untested rape kits in Detroit alone?! What the hell, America!" The testing of rape kits is an important issue, because right now it's not automatic. A woman can decide to report her rape, knowing that she will most likely be called a slut and see the man walk free, only to have her DNA evidence never even tested, and the case never investigated. Read the article here, and join me in getting righteously mad.

5. In checking-up-on-them news, Bleeding Cool applies the Bechdel Test to comics, with some surprising and unsurprising results. For the uninitiated, the Bechdel Test is the minimum level a movie or book or comic must reach in order to be considered to have female characters. It must have more than two named female characters. They must talk to each other, about something besides a man. Sometimes we add in the qualifier, for more than 60 seconds, because honestly, it should be a hell of a lot more than that. So read the article here!

6. In feel-you-there-sister news, Erin Long over at Hello Giggles has a hilarious article about "5 Ways Buffy the Vampire Slayer Ruined My Life. " You should totally read it, and stay tuned for when our very own Elizabeth Kobayashi starts reporting on her efforts to watch Buffy for the first time.

7. And finally, in gender-breakdowns-for-the-win, Mike Rugnetta of the PBSIdea video series on youtube has an awesome video on how the male interest in My Little Pony: Friendship Is Magic makes the show both feminine AND masculine, and that we should probably start redefining masculinity.

That's it for this week, but be sure to tune in this afternoon at 2pm PDT for another episode of Crossover Appeal!
Posted by Unknown at 9:00 AM