Today we have a guest article from Kyla Gorman. You can read her previous guest post here. 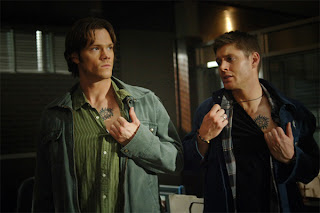 Allow me to begin with a grand, sweeping declaration: 'Supernatural' is the most feminine show on television right now.* Yes, the gory supernatural horror show starring two male characters and an almost entirely male supporting cast, that Supernatural. This may seem to you like a non-obvious statement, given the nature of the show, but allow me to explain. It's all in the definition of feminine.

Let's take a moment to look at two media landscapes side by side: the pop-culture mainstream media (fictional media only, for the purposes of this discussion), primarily produced by and for males, and the fan-media landscape of fanfiction, fanvids, etc., produced primarily by and for females.**

Shows in the standard pop-mediascape tend to center around things happening. They can be dramatic things or wacky things depending on the type of show, but we are nevertheless expected to understand the characters based on the things they do - the actions they take in specific circumstances and in response to events in their lives. Characters tend to be defined by what they do. 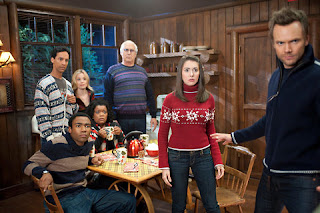 Take, for instance, the show 'Community.' We know Jeff is narcissistic and arrogant, but ultimately tends to come through for his friends. We know this because he can and does make grand speeches at the drop of a hat, because he used to be a lawyer and often still acts like one, because despite what he says and however reluctantly he does them, his actions are usually those of a reliable friend, at least by the end of the episode.

Take Britta - we know her as a somewhat hypocritical feminist who latches onto any nearby cause that seems even vaguely political, and has a tendency to be unaware of her own flaws. We know this because we see her fickle attraction to men who don't treat her well, we see her jumping onto convenient bandwagons, and we see her constantly screw up things around her, often from lack of self-awareness. Her actions speak for her. If you were to give a breakdown of the sequence of actions of an episode of one of these shows, it would tell you most, if not all that you need to know about the nature of the characters involved. 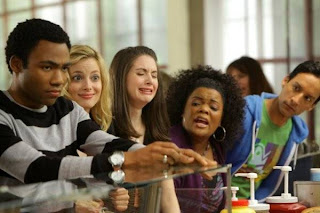 Here, by way of a for instance, is a detailed summary of the actions in one episode of Community: The biology professor assigns everyone in class random lab partners. The members of the study group request that they be allowed to pair with each other instead. This is allowed, but the group has an odd number of people so they pick up a random person from the class, Todd. After attempting to work together in the first set of pairs, most of the group members discover that they are incompatible with each other one-on-one; Troy and Abed because of over-exposure to each other, Britta because she doesn't want to hear Shirley talk about her baby, and Annie because Jeff doesn't want to do the work. They return to the study room and demand a partner change, relying on Abed's impartiality to create an algorithm to choose partners. When Abed's algorithm is revealed to be based on popularity, the group devolves into more bickering about their relative popularity. The rift is finally healed by the group coming together to gang up on Todd, who was sick of the in-fighting and just wanted to do the assignment. 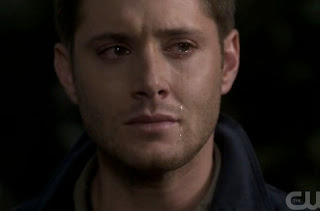 Compare this to the fan-mediascape. Fan-media tends to center around characters feeling things, and we are asked to understand the characters based on those feelings and on the inter-character relationships. There are plenty of fanfics and even more fanvids in which nothing or almost nothing actually happens, but our understand of the characters is significantly deepened or changed based on their introspection or their emotional reactions to events. When things do happen in fanfics, these events are almost always catalysts for the author and reader to explore how the character feels about them and what the character's emotional reaction is.

Even the character's actions in response to this catalyst are shown as an organic growth from the character's emotions, or are shown specifically to indicate to the reader the nature of the character's emotional response. Obviously this can be and is presented with varying degrees of class and subtlety - a poor writer will just outright tell us what the character is feeling, while more experienced writers can more subtly examine the tension and emotionality through things like tone, inner dialogue, and strategic emotionally-motivated actions.

Take, for instance, this fic: Play It All Night Long (http://janie-tangerine.livejournal.com/290160.html). This is a Supernatural AU where Dean is a radio DJ and Cas is one of his listeners who calls in. If you were to describe the central action in this fic, it would go like this: Dean hosts a radio show, and Cas calls in repeatedly. Then, when Cas gets kicked out of his apartment, Dean offers to help him out by taking him in, since he himself experienced similar issues in the past. Dean's brother and Cas's brother show up, and everyone meets each other. Dean and Cas hook up. The end. But of course that doesn't come even close to describing what is interesting or memorable about this fic. 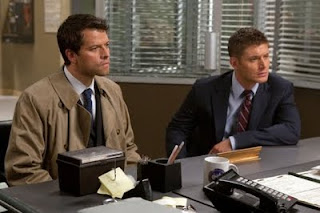 Now, I'm not saying that no mainstream media contains any feelings, just like I'm not saying that fanfiction never has a plot. I'm talking about what drives the two mediascapes, the underlying causes behind why these media are made the way they are, and the elements that determine who most enjoys consuming them. These things don't make up the entirety of either mediascape, but I believe that this is at their respective cores; you couldn't easily get away with having a TV episode where nothing happens other than people talking about their feelings, but you see this in fanfiction all the time. 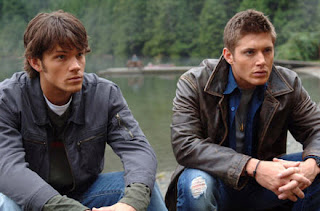 But what does all this have to do with Supernatural? Well, let's take a look.

More and more (as the writers catch on to the nature of their fanbase and how best to cater to them, one assumes), Supernatural has become a show in which the actions are little more than an excuse to show us something about the emotionality of the characters, or the relationships between the characters. Heck, one of the major storylines in the end of the last season was Dean coming to grips with Cas's betrayal and coming to forgive him for it. Again, it was about Dean reaching out to try and make a connection with someone. 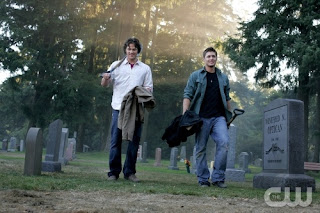 Yes, things happen in Supernatural, I'm not saying they don't. But more and more it's becoming apparent what the fans really crave: it's the conversations the characters are having. It's the way Dean's been carrying around Cas's coat the whole season, presumably in the hope that Cas might yet come back to them, despite the complicated state of their relationship. It's about why we care about these characters, and who they are. We long ago established what it is that they actually do, and that hasn't really changed in ages; who they are is given to us in how they behave with those they care about, and how the things they do affect them emotionally. That's the core of emotionality, and the core of female-centric media.

So when I say that Supernatural is the most feminine show on television, what I mean is that more than any other show I've see, it's the most correctly-targeted towards a female viewing audience, and the most ripe to appeal to female viewers (the hot male leads certainly don't hurt). Unlike most shows that the media says are targeted towards women ('New Girl' and similar sitcoms, etc.), Supernatural - dark and bloody though it is - is the one that actually shows women what they want to see, to the point where the emotional exploitation of the male characters might almost begin to be on par with some of the less egregious physical exploitation of female characters in main-stream male-targeted media.

And I, for one, say: bring on more shows just like it.

* Or one of the most feminine, at least. I don't watch nearly as much television as Debbi does, so there might be other shows that also fit my particular definition of feminine on the air right now that even do so to the same or greater degree that Supernatural does. But if so, I've never seen them. I leave it to others therefore, after reading this, to argue whether certain other shows fit this definition better or worse than Supernatural does.

** There is a corresponding male fan-media landscape as well, but it's somewhat different in nature and not what I'm discussing here. If you want some good breakdowns of the differences between these fan-media landscapes, go look up some essays and/or books on fan culture by Henry Jenkins. Seriously though, that guy is awesome.