Minor Characters That Aren't Cardboard (The Women of Sherlock) 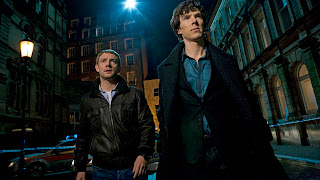 If you may recall from my article on Genderswapping, there is a BBC show called Sherlock about Sherlock Holmes. Yes, I am aware that the second bit seems to follow from the first, but we do try to be clear here. Anyway, Sherlock is a modern-day retelling of the Sherlock Holmes stories, one where cell phones and taxis and a blog take the place of letters and hansom cabs and memoirs. It’s very good.

Of course, since it’s based on the Sherlock Holmes stories, and the only major piece they changed was that it’s set in present day, the two leads are men. And fabulous men they are too, with Benedict Cumberbatch burning through the screen as an intense, mildly Asbergy Sherlock, and Martin Freeman quietly stealing his thunder as the oatmeal sweater wearing, perfect shot John Watson.

It seems only fitting that their characters meshed so perfectly that this casting was recreated in the upcoming Hobbit movie, where Freeman plays Bilbo, and Cumberbatch voices the dragon. 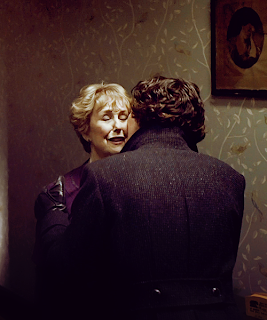 The rest of the characters rounding out the story are largely drawn from the books, with Inspector Lestrade a well-meaning Scotland Yard DI, Mrs. Hudson the boys’ meddling but adored landlady, and Mycroft Sherlock’s well-connected and unintentionally sinister older brother.

But aside from Mrs. Hudson, this doesn’t leave the cast with many women involved. Now, that’s not all that surprising, since this is based on a set of stories where the non-Mrs. Hudson women were always incidental parts of cases, or, eventually, Watson’s wife. Fortunately for us, Moffat and Gatiss, the show creators, decided to do something about that.

There are a lot more women in the Sherlock world than seem immediately evident. This is good. We like this. While it would be lovely if the women ever interacted without a man present or talked about something other than a man when they did, it’s frankly just impressive that there are as many of them as there are.

Mrs. Hudson, as I’ve mentioned above, is the boys’ landlady. In the books she was their housekeeper, which makes it interesting that she was reinterpreted into a position of higher power and authority. Aside from all of that to begin with, though, she is, quite simply, a badass. That’s right. Mrs. Hudson foils kidnappers by pretending to cry, consistently takes Sherlock and Mycroft down a peg, and never blanches at the sight of a head in the fridge. She’s the stalwart mum that we all want, and she takes her duties to protect the boys seriously. That doesn’t mean she doesn’t occasionally take up with married shop owners or gossip incessantly, though, and that’s what makes her a good character. 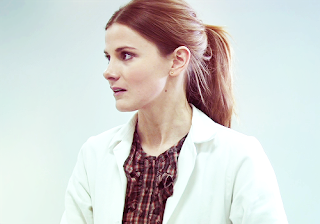 Molly Hooper is an original character, but an important one. As the coroner who Sherlock most often comes to, Molly is Sherlock’s link to the world of science. Without her help, he would be unable to make most of the discoveries he does, and would have to rely merely on coroner’s reports and not hard evidence. That having been said, though, Sherlock treats Molly as a sort of pet, throwing scraps of affection her way whenever he needs something, then ignoring her until she’s needed again.

Ordinarily I would hate this in a character, but I’m cool with it here, because Sherlock’s behavior is definitely found to be not okay. John points it out many times, Lestrade points it out, even Molly eventually tells Sherlock that she’s had enough, forcing him to be honest with her and tell her how much he respects her. It’s so far from the usual paradigm on these shows that the characterization of Molly actually wins my love by creating a character who knows she’s needy and a bit weak, but isn’t okay with it and is working to change. 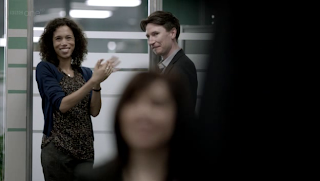 The last female character who appears in nearly every episode is Lieutenant Sally Donovan, one of Lestrade’s command, and a pretty clear antagonist to Sherlock. Donovan’s position is actually pretty simple, and not unreasonable: Sherlock shows an unhealthy level of glee at most murder sites. This cannot be emotionally healthy. He is a self-professed sociopath. It won’t be long until Sherlock Holmes is the one killing people. That’s it. And I have to hand it to her, from what she sees of him, that’s a pretty reasonable assumption.

Donovan is a villain in the series because she keeps trying to get Sherlock arrested, and at one point actually succeeds, but that’s not exactly why I appreciate her. It’s actually because she’s a fully rounded person in addition to being a good cop. Which she is. A good cop. But she’s also a cop who’s having an affair with another cop, a cop who loves her boss and hates his friends, and a cop who isn’t entirely sure if she’s done the right thing in the end. She’s never swayed by Sherlock’s pretty face or occasionally caring façade, and if she sometimes is too harsh, calling him “Freak”, he’s harsh right back. Antagonists need to be well-rounded in order to be interesting, and she is.

As for the side characters, the most notable of them is Irene Adler, infamously known as “The Woman” in the books. She’s maybe the only woman Sherlock ever loved, blah blah blah. In this interpretation, though, she’s a brilliant but amoral dominatrix, who uses her position to get blackmail information on people of power. Which is kind of hilarious, if you think about it. Sherlock takes to her immediately, because she can call his tells, and he can call hers. But what makes their relationship interesting is that it’s completely non-sexual. They have no romantic inclinations towards each other, just mutual curiosity and a love of being right. It makes her fun and incredibly dangerous.

There are, actually, a fair number of other women I could mention here, from Anthea, Mycroft’s utterly badass personal assistant, to Sarah, John’s sometime girlfriend who feels like she’s competing with Sherlock, to Mummy, oft-mentioned but never seen and presumably terrifying. But I think I’ve made my point.

Even in shows where the leads are men, and the main tension of the story revolves around men, there’s no excuse not to have fully realized, interesting female characters. Even characters as simple as the coroner or the cop need to be real people in order for the world to feel real, and in order for the story to be completely fleshed out.

So, get on that, writers.