Werewolves, The Us We Wish We Were 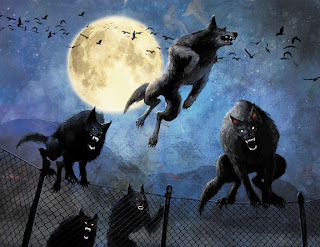 This is a topic I touched on earlier, though I focused then on the more puberty related aspects of the werewolf narrative, but I find werewolves fascinating. Honestly. I think the fact that we fantasize about turning into giant raving animals during the full moon, and that we can’t seem to decide whether that’s a good thing or a bad thing is absolutely interesting.

Why have we fixated on people turning into wolves to the extent that anything else has to be qualified. We have a word for werewolves (lycanthropy), but no similar word leaps to mind for werebears, or werepanthers, or wereraccoons. Even though these animals are all native to the same region of the world (North America) that is occasionally considered to have started the werewolf phenomonenon, with Native American skinwalker legends, we don’t find many other animals represented. So, why?

I think it’s because of community. Not the show, obviously, but the innate human desire to find more of us and be together with them.

We’re kind of big on it.

Community is such a large factor in our collective consciousness that most fiction references it in one way or another. We talk about families of choice, as in Friends, or the loving town that keeps itself together, Gilmore Girls, or even a straight up community college, Community obviously. We like to be together.

Wolves too like to be together. They form into packs, and the idea of a wolf without a pack is so singular that we differentiate that with a qualifier. It’s “Lone Wolf” that’s the term, not “Wolf in Pack”.

So to some extent, we love wolves for our werebeasts, because they most closely resemble human society. It’s easy to see them as “human” animals, because they have a hierarchical society, organize off into families, and mate for life—all of which are things that humans either do, or claim to do.

It makes sense that the pack structure would appeal to a story like werewolves, and that it would easily be incorporated into the werewolf legend. The shifters in Twilight have a pack, with a clear Alpha, and clear not-Alphas. The wolves in Teen Wolf also have the standard structure, with an Alpha, Betas, and an Omega.

But here’s the thing: most werewolf fictions completely neglect an aspect of wolf society when they translate it over. Werewolves are egalitarian, not patriarchal.

When people write a werewolf fiction, they almost inevitably revert to an idea that the Alpha must be a male werewolf, and the female werewolves, if there are any, are his seconds, the Betas. But this isn’t true to nature. Wolves actually sort themselves by hunting ability, and the Alpha Male and Female are the two strongest wolves in the pack. They are also, almost inevitably, mates.

When we coopted the wolf pack structure, we interpreted it through our own society’s gaze, and that gaze was one of patriarchal structure.

But even with a patriarchal interpretation, the werewolf fiction touches something deep inside us. We long for community, a place where everyone is accepted and loved, and, no matter what their place, needed. So werewolves make sense to us, the longing to be in a pack, and the need to be accepted no matter what you are.

It’s more about who we are as people and our extrapolation of that onto other species than it is anything else. The beasty aspects are just frosting.