The Women in Red Dawn Suck. That Is All. 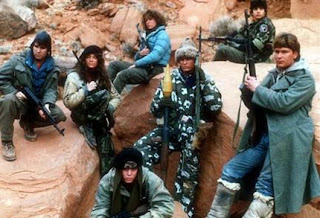 Occasionally I really do come across a film I’m not very familiar with. By and large, these are movies from the 1980s, a time period when no one in my family was particularly conversant with pop culture, and thus is a giant mystery to us all. And so it happened that last night, when I watched Red Dawn, it was the first time I’d ever seen the movie.

Now I love a good Tom Clancy novel like the rest of them, and this is a pretty hardcore rendition, including starring turns by the likes of Patrick Swayze, Charlie Sheen, and Jennifer Gray, but it’s not a good film. Like, at all.

And that’s fine. Lots of people love bad movies, and if this one was a little (incredibly) light on character development and motivation, then that can be okay. The reason I hated it was because of how they treated their female characters.

Let’s start back at the beginning. 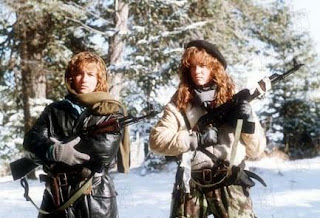 Red Dawn is one of those classic creations of the Cold War, when everyone was just waiting for the US and the USSR to start World War III because someone pushed someone on the playground. It was a pretty common theme in everything, but Red Dawn took the opportunity to question what would happen if the USSR and Cuba invaded middle America. It’s an intriguing question, I guess, but the result wasn’t so good. Apparently what you get is a bunch of teenagers turning to guerrilla warfare and killing lots of people in increasingly tactically unfeasible ways.

There is nothing in the way of character development, to the extent that I never learned a character’s name in the whole thing. They are known to me as In Charge Dude, That Guy’s Brother, Anger Management Issues, Whiny, Inappropriate Crushes Girl, Baby Is In A Corner, Whiny, and Cannon Fodder. This is a sorry state.

There were two women in the film, though, who ostensibly had names and were characters, so let’s talk about them.

They had just as little character development as the guys. 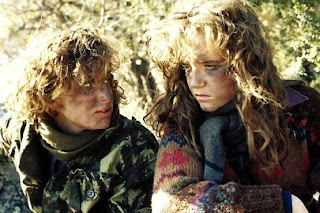 I think you can get where I’m going with this.

Not only are they constantly in danger, and represented less as useful members of the team, but more as babysitting charges who can occasionally carry things, even that aspect of their personalities isn’t dealt with in the story! There is no cohesion to their development or lack thereof in the entire film. What we get is snippets of dialogue probably intended to show that they were empowered female characters, and instead show that whoever wrote this has never talked to a girl. 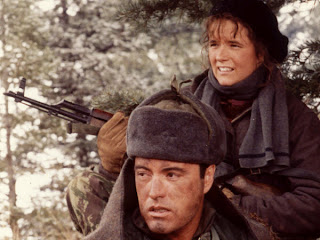 Take in point Inappropriate Crushes Girl. She’s actually played by Lea Thompson, who was Marty McFly’s mother in Back to the Future, so the name is super accurate. She is always presented as a little off. She cries a lot, gets offended at weird stuff, and doesn’t talk much. According to her sister? cousin? this is because “something happened to her.” I can only assume they mean by this that she was raped. Or hit repeatedly in the head.

She comes across a downed US Colonel, and instead of going, “hey, maybe I can talk to this guy about his family and make him feel better”, she uses the questions about his wife to kind of hit on him, which made everyone in the audience when I saw it go, “Ewwwwww.”

When the Colonel dies later in the movie (there is no such thing as spoilers for a movie from the 1980s), she is devastated and sobs about never loving anyone again. Wait, she loved him? When? Why?

And then there’s her sister-cousin, who races in and out of nearly being raped for the entire film, only to be shot in the final reel, and for us suddenly to be told that there is a great romance between her and In Charge Dude. Again, when? Why?

This is an eighties action movie, so my standards aren’t that high, but when you take the only two female characters in the whole thing, and then make them pawns to their emotions and romantic feelings, constant rape bait, and utterly inept, then ask us to care when they get their hearts broken, it kind of feels like cheating.