In Defense of Dawn Summers 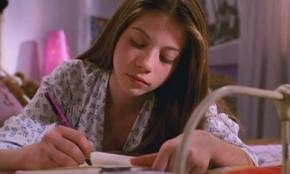 I know that we have a series going on (slowly) where our guest writer, Elizabeth Kobayashi, watches the whole Buffy series and reacts to it as a first-time viewer. If that sounds more your speed, you can totally check it out here.

But, today I want to jump ahead a few seasons and talk about the (probably) most controversial character from that show’s history. Dawn Summers.

A fair number of you just groaned. And I don’t blame you. For a long time, the Buffy fandom has reacted with frustration and mild hatred to a character who honestly just acted the way all of us would if placed in those situations. Especially if we’d been placed in them at the tender age of fourteen.

Let me back up. For those of you not in the know, in season five of Buffy, Joss Whedon decided to spice things up a bit and bring in a shiny new character. First appearing in the very end of the first episode of the season, Dawn Summers is Buffy Summer’s never before mentioned younger sister. Annoying, whiny, and definitely a teenager. A teenager that most Buffy fans were utterly mystified by, because up until this point in the show, Buffy had been an only child.

Of course there was a reason for Dawn showing up right when she did, and that was the season arc of season five. Dawn was a mystical macguffin, turned into a human girl and placed into the protection of the Slayer, who would do her job and make sure no one hurt her sister. It’s actually a really cool plot, and not badly done. This was the season where life started really getting hard for the gang, and adult choices had to be made. Buffy’s mother died, and she had to assume custody of her sister. Xander and Anya got engaged. Willow and Tara moved in together. Stuff happened. 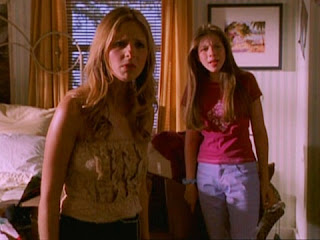 And in the middle of it all was a shrieking fourteen year old who’d just found out that she wasn’t a real person and all her memories were fake and oh my gosh this and high school?!

So most fans didn’t react well to Dawn. And, to their credit, it was a bit of a buzz harsher to suddenly have a teen following all of our finally adult characters around. Threatening to tell on Buffy when she came home late. Making googly eyes at Xander. Being fourteen.

But the thing is, Dawn was a really important character for the show. Moreso than most people realize.

At the point in the story where Dawn comes in, most of Buffy’s internal demons have been sorted. Sure, her relationship with Riley is floundering, but it’s not hard to figure that she’s going to either sort it out or move on. She’s in college, doing well. Her friends are in good places with their lives now, and most of her “I’m the Slayer, aaauugh!” moments have been ironed out. In short, there’s pretty much no personal conflict left in her life.

Dawn provided the opportunity for Buffy to have tension in her life again. Tension revolving around familial responsibilities and relationships. Tension that gave us new insight into who Buffy is as a person, and made her decide much tougher things than she ever had before.

In the first four seasons of the show, the conflict is centered around Buffy. The bad guy wants to kill Buffy. Maybe the bad guy also wants to end the world, but Buffy gets involved because the bad guy also hates her, needs her, whatever. In season five, the bad guy didn’t need Buffy. She didn’t care about Buffy. At all. 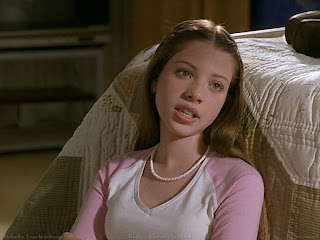 What she wanted was Buffy’s annoying little sister. And Buffy figured that out. There’s a phenomenal scene when they realize what Dawn’s status means, and they all think about how to keep Glory (the bad guy) from getting her. Giles puts up the obvious answer. They could kill her.

It’s simple, ruthless, and would solve all of their problems very quickly.

This is the point in the show where Buffy stopped just being a good hero, and became a mythic one. Where before she was fighting for goodness and saving babies and all that, she didn’t have to make immense choices like this. There were no kill or die moments in those first seasons. But now, there was. Now we had to see what Buffy would do when given the option to save everyone by ending one person.

She chose the difficult path. And that’s what matters.

There’s a profoundly moving scene in the hospital after Dawn’s found out that she’s not quite real. She looks at her blood and wonders what it really is, and Buffy holds out her own hand. “It’s Summers blood. Just like mine.” In that moment, Buffy completely identifies herself with her sister, and a romance is born. As Joss Whedon has said, season five is about love. Familial love. 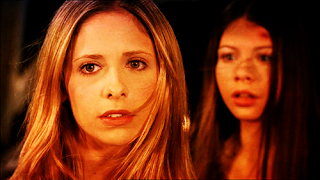 Buffy chooses to sacrifice herself for Dawn, proving that their blood is their bond. It’s a beautiful (painful) scene, and one that really cements Buffy’s status as a hero. She has done the most heroic thing she can: actually give up her life to save the one she loves.

Dawn doesn’t disappear at the end of season five, and I think this might be the problem some fans have with her. After Buffy’s sacrifice, after the amazing bonding, the Key is no longer needed. Dawn doesn’t have to stay.

But she does, and it makes the show richer for it. Now she and Buffy have a different relationship, but Dawn is caught up in the throes of teenage angst and rebellion. She’s been handed a rare gift, her sister’s sacrifice, but forced to live with the reality of a miserable life. It’s touching, and adds a needed humanity to the show in its darkest season.

By season seven (which is criminally underrated, by the way), Dawn is a full-fledged part of the group. She’s mostly dealt with her problems, and is now able to focus on helping others. It’s a great turnaround and great growth for a character like hers. There’s even an episode where Dawn has to come to terms with the fact that she isn’t special, not in the way that Buffy is. Personally, I found that to be excellent writing. In a world where Dawn was invaluable two years ago, now she’s just another human. That’s brilliant.

I don’t want Dawn’s later successes, though, to act as a bandage, covering over all of the trouble she got into before. That’s not how it works, and you wouldn’t care even if it were. The important thing about Dawn is that she showed us what it was to be young and afraid again. Her existence in the storyline made other characters better, but not by making her a husk of sloppy writing. She was fully realized and integral to the plot.

That’s what good writing does. And that’s what love does too.