Why All the Ladies in First Class Gotta Be Naked? 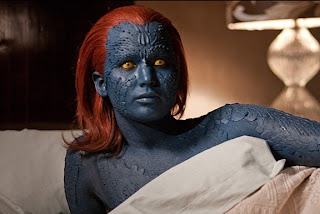 As I established in this article right here, I love X-Men: First Class. Completely. Utterly. Blissfully unnoticing of its many flaws.

Okay. That last one was a lie.

X-Men: First Class did a lot of things really well. Created a cool universe for the characters to be reborn, made me ship Magneto and Professor X even more than I already did, and made Beast cool again (no thanks to Kelsey Grammar). But the one thing that it really, really failed on was the ladies. Of course.

Now, don’t get me wrong, I thought this conception of Mystique was interesting and unique. I thought it was pretty dumb that she abandoned her brother for a guy who said she was pretty, but she was a teenager. Whatcha gonna do? And January Jones might have been a little flat as Emma Frost, but she was an epic ice queen and pretty cool bond girl. Rose McGowan certainly held her own, and Zoe Kravitz was a pleasant surprise.

It’s just…weren’t they kind of naked a lot?

Think about it. (I just typoed “think about tit”, and I feel that is accurate enough to warrant a mention.) Each character is unclothed (either naked or in lingerie) at some crucial point of the story. Not just at some point, but at some important point. Usually when they make a stand as a character.

For Mystique, she’s generally pretty naked as a character, so it seemed like the nudity was inevitable. Kudos to Jennifer Lawrence for handling it well. But I object to the idea that wearing clothes is a form of “hiding her stripes”, and I fully object to the idea that we are supposed to dislike Charles because he’s uncomfortable seeing his little sister ass naked. Yes, Mystique’s true form is lovely. But like a lot of lovely things, it could use some mammary support. (A bra.)

I also find it objectionable that she is naked in key moments of the film where she establishes her identity. From her first meeting with Charles, to her confrontation with him in that same kitchen, to the really uncomfortable bed scene with Erik, she uses her nudity as a form of self-expression that is interesting, but seems unnecessary. We could get the point just as well if she were in a bathrobe.

For Emma Frost, again, lingerie is rather her thing. She’s pretty shameless about flaunting what she’s got, and insofar as she’s basically a Bond villain, it works. However. There’s a point where the line between having a character with severe lack of modesty and having a character who exists only to titillate becomes blurred. And that point is right about at the midpoint of the story.

When we meet Emma in Russia, she’s using a mental projection to screw an official. Creative and all, but does she actually need to be stripped down to her skivvies to do it? Clearly she can project a mental image of whatever she wants, so why bother stripping at all? She looks cold.

The only assumption we can come to is that she does it for the titillation of the audience. There is no in-film logic. She is only there for us to feast our eyes on. That is where the character-realism ends and the sexism begins.

Or take Angel. While Zoe Kravitz’s performance was very good, was there any real reason why her character had to be a stripper? To my eyes, there wasn’t. She could have been a student, or a waitress, or, if they wanted to stick with the stereotypes, a stay at home mom, and she would have been considerably more interesting as a character. Making her big issue “I don’t like it when people look at me,” only makes the story more confusing. If she doesn’t like to be stared at, why is she a stripper? Is this something she has to do, either because of money or because she’s being forced or something? Why aren’t we discussing this in-film?

And, again, there’s only one logical reason for this storyline. Because the writers wanted to see Charles and Erik at a strip club. That’s the only logical reason why they chose this for her character. That’s the only reason why she continues to wear her stripping costume throughout the rest of the film, despite professing to hate stripping, and why she is topless when she shows Erik and Charles her powers. Just for us.

Perhaps the most egregious use of this rule, though, is with Moira MacTaggert. In this iteration of canon, Moira is a FBI agent. She and her partner are on a stakeout, and she realizes that she needs to get inside the building. So, what does she do? She strips down to her underwear, which is obviously very sexy lingerie, and follows a bunch of call girls in.

Why? She’s a very good agent, I’m sure she could have thought of something else, and then we wouldn’t have had to watch a woman in her underwear trying to sneak around.

Oh. Right. Because they wanted boys to watch this movie and if there weren’t tits in the first ten minutes their male audience might rabbit.

Look, I try really hard not to be cynical, and I don’t think of myself as a prude. If a woman wants to show what she’s got, fine. Cool. Very nice, even. But only if it’s her choice. Only if I can look at the situation and say, “Ah, yes. You’re doing that because you want to, not because some arbitrary function of plot says that you should.” I’m okay with women showing as much skin as they want when they are characters and it’s their choice. Not when they are objects and it’s a choice being thrust upon them.