Pilot Season: Animal Practice (The Monkey Is the Best Part) 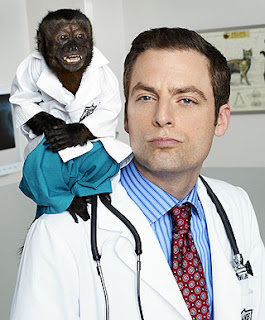 You take one part House, which is fine because House is over so no one can get butt-hurt over ripoffs, two parts the monkey from the Hangover movies, and a nice dash of a 90s romantic comedy, and that’s pretty much how you get Animal Practice. It’s not original, or even particularly entertaining, but damn is it safe.

Sorry. That was mean.

Look, I can understand that sometimes a writer just defaults to a simple premise in order to sell the show. I need money too, I get it. It’s just, when the result is a chuckle-free, “aren’t we so wacky”, “and the sexual tension is hilarious” half hour of tired jokes and really simplistic characters, I get annoyed.

Dr. Coleman (Justin Kirk) is a veterinarian who hates people and loves animals. He is Gregory House for pets, and that’s pretty much the best thing you can say about him. Played by the able but not necessarily correctly cast Kirk (who was on Weeds for ages and also in Angels in America, so he’s actually a pretty good actor), Coleman is a gruff, largely unlovable galoot who hangs out with his pet monkey (Dr. Rizzo) and generally terrorizes pet owners.

His perfect world (which of course involves sleeping with any attractive woman who crosses his path) is shaken up by the return of his ex-girlfriend, something-something. Sorry, I totally tuned out her name. It was really hard to keep paying attention to this. 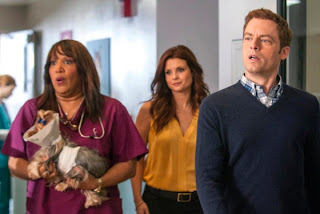 Anyway, the ex, played by Joanna Garcia Swisher, so we’re gonna call her Joanna, has just come back because her grandmother has passed away. And in a crazy round of hijinks, Joanna’s mother actually owned the animal hospital (get it?), so now Joanna’s in charge! She’s got high hopes and lots of good feelings about this. She’s gonna turn this place around because it just means so darn much to her. Gee.

Coleman, is, of course, nonplussed at this, and decides to make her life a living hell. Blah blah blah wacky hijinks blah Coleman quits blah blah he does the right thing blah they make up. Professionally, of course. The plot is very predictable and decently done. Nothing special or exciting, but it’s doable.

My real frustration with the story (aside from how they substitute gimmicks and “wacky characters!” for jokes) is the romantic relationship. Because, frankly, it’s not very romantic. In fact, it’s mostly insulting.

Two years ago, Joanna left Coleman out of the blue. Immediately I kind of seized up, because while that is the sort of thing that you immediately know will be explained and shit, it paints Joanna in a very bad light. And, unfortunately for her, the light never gets better. It turns out she left because she had just told Coleman she loves him, and he replied with, “Awesome.” Hardeeharhar isn’t that awful of Coleman to do?

Now in this scene I genuinely didn’t know whom we were supposed to relate to. On the one hand, Joanna is pretty and nice and has shiny hair, but she is the one who did the leaving. On the other, I really don’t like Coleman, and sympathizing with him makes me feel icky. So, dilemma. 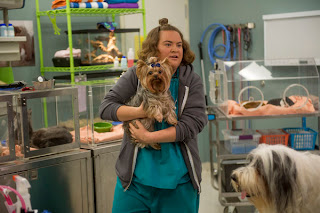 Later on in the episode, after their “omg sexual tension” has played out for a while, Coleman comes out with his big announcement about how he wasn’t ready etc. Don’t care, wasn’t listening. They sort of make up, and it’s all hearts and kisses, and you just know those two crazy kids will get it together somehow.

Except, I still don’t care. Nothing about this show has appealed to me emotionally, and now I’m stuck watching the two most obvious people in the world tug each others’ pigtails. It’s like watching Newsroom, if Will and Mackenzie were even more irritating. Which would be impressive.

But most of all, I don’t like the way the characters are cast. No one on this show is developed. No one. Joanna is so dull I don’t even remember her real name, Coleman is a clear ripoff of other characters, and everyone else is just there to pad the background and be funny. No. Like.

If there is one redeeming thing to say about this show, it’s that the monkey is genuinely funny. But if that’s the best thing I can say about a show, that’s a terrible sign.