Pilot Season: Go On (Or Just Go Away) 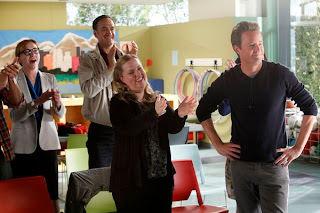 I can accept that I am hard to please, but I have to admit that I am genuinely sad that last year’s Matthew Perry vehicle, Mr. Sunshine went away. It had Allison Janney and Jorge Garcia in it! And it was funny! Sad.

Anyway, this year’s stab at ratings is Go On, a “comedy” about a recently widowed sportscaster going to group therapy and trying to keep his life together. Hence why the comedy bit is in quotes.

As with a lot of other shows this year, I’m sure, it’s not a bad show, exactly. It’s well written and some of the jokes are flat out funny, even if they never do make it to hilarious. It’s well done and the actors are clearly putting their backs into it, trying to make the story work. Good jobs all around.

The problem is that it’s just not a funny premise. Like, at all.

First of all, the main character, Perry’s Ryan King, is a narcissistic, miserable man. He needs constant adulation from his fans and assistant to keep him functioning, especially now that his wife has passed. Kudos to Perry for instilling that grief into something believable, but the pall of death hangs over his every scene. He’s desperate not to go to group therapy, because he doesn’t want to be like those other people, actually facing up to their grief. Wheeeeeee. 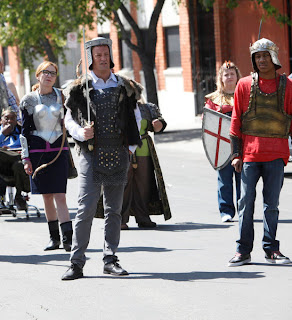 The other characters are a wash of sadness. Owen, a teenager in the group, is coping with his older brother’s coma and probable death. Fausta is an elderly woman whose son and husband have both died. George is blind and dealing with his loss of mobility. Sonia’s cat died.

While the scenes involving the support group are easily the most morose, they’re also the most touching and usually the most funny. The humor of people in pain trying to help each other, and sometimes making it worse, is a good place to start. Having them bond and become more of a family is also good. Having Ryan constantly butt heads with the know-it-all counselor Lauren (Laura Benanti, from last fall’s Playboy Club) is less awesome.

And the most depressing scenes actually come outside of the group, when we see Ryan trying to interact with his assistant, Carrie (Allison Miller). Carrie’s worried about her boss, but that worry quickly turns to frustration when he’s so afraid to go home that he won’t leave her alone. And, unfortunately, we really feel her pain. So much so that Ryan’s pain gets left by the wayside and he looks selfish and annoying. Which is not a good look for a leading man this early on in the show. 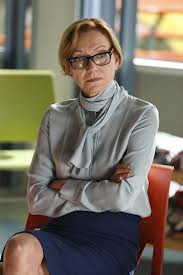 I guess what I’m saying is that I’d like some more funny, please. They’ve got a good group of actors and an okay premise. If you can wring comedy out of pain, then do it, but be quick about it. We’re not going to wait around here all day.

By far the best performance and most interesting character on the show is Anne, the middle-aged lesbian who has moments of intense rage in the midst of her grief. Easily the funniest character too, it’s really amazing to watch Anne (played by Julie White) dealing with her emotions. You can tell that she’s not used to it, and watching her beat a tombstone with a bouquet of flowers, walk away, then turn around and beat it some more is the perfect combination of sad and hilarious.

But tragically, not enough of the show contains this perfect storm of sentimentality and humor in its characters. Some of them are obviously supposed to be funny, and others are clearly there to be sad. It’s not a great mix.

And don’t get me started on Mr. K. As good a performance as Brett Gilman is giving, that guy shouldn’t be allowed anywhere near group therapy, and it honestly sketches me out to see him on screen. Eugh.

The verdict comes down to this: Is it awful? No. Does it need a better sense of balance and a crapton more humor? Hell to the yes. It’s not a bad choice to pass the time, but it’s not something I’m going to be intentionally tuning in to watch. And if I do, it’ll be so I can grab another glimpse of Anne’s incandescent (and funny) rage.