Pilot Season: Guys With Kids (Burn It With Fire) 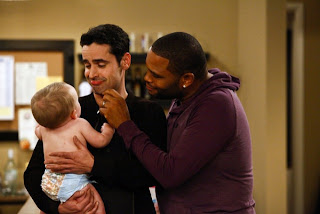 Dear Guys With Kids, how do I hate you? Let me count the ways.

1. You imply that a man caring for his own child is both unusual and noteworthy. It’s not.

2. You outright state that women who are overly invested in the wellbeing of their children are overbearing bitches.

3. You imply that all other women are either controlling maneaters, needy neurotics, or nubile twenty-three year olds.

4. Your characters really suck at taking care of their kids.

Okay, so the last one was kind of specific, but suffice it to say that Guys With Kids fails to deliver in a pretty epic way. For a show with such a simple premise (it’s in the title), it did have some potential to be a new look at fatherhood in the twenty-first century. But I don’t think any of us actually expected that it would do that.

The setup is simple, which isn’t actually a point against it. There are three dads. Stay-At-Home Dad (sorry, I don’t remember their names, and I can’t be bothered to find out), Dude Dad, and Divorced Dad. They all have their own issues with both their kids and the women in their lives. 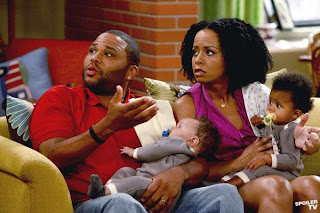 Stay-At-Home Dad is unhappy because his wife goes out and works while he stays home with their four children under the age of six. Yikes. Actually, this was the story I liked the best. SATD was funny and comically tragic, as he laments how his television has been broken for months, but the kids have sucked them dry so much financially that they can’t get a new one.

His exasperation and exhaustion, along with his acting as girlfriend and sympathizer to his stay-at-home mom friend were very well played. Plus, it was nice to see at least one (if only one) working relationship. SATD and his wife burst out laughing thinking about how they may have nothing, but at least this means there’s nothing left to break. It was a clever moment of pseudo-hysteria, and I liked it.

That having been said, the other two dads, Dude Dad and Divorced Dad are a whole pile of nothing. Dude Dad is annoyed because his daughter is all princessy. He’s also in trouble with his wife because she got all dolled up for a fundraiser at their daughter’s school, and he forgot and offered to babysit for Divorced Dad. His problems are negligible, and he’s kind of a terrible person. Not a fan.

Divorced Dad, though, takes the cake in the unlikable contest. Somehow managing to be both smarmy and irritatingly shy, he’s recently divorced and looking to get back out there. 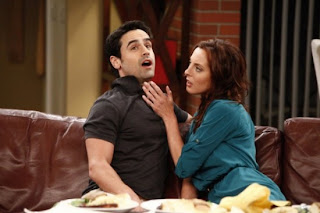 Of course, his ex-wife is a huge bitch who won’t let him get a babysitter for their kid when he finally gets a date (by which we mean, he finds a girl who will sleep with him—there’s no way he’s actually trying to date that girl). The ex-wife is of course ruining everything blah blah, and while they certainly paint her that way, I didn’t find her too unreasonable. Considering what he actually did in the episode, I’d be pretty hesitant to leave my kid with him too. He brought a baby to a bar.

Overall, the show just falls flat. It’s got standard sitcom gags about mixed signals and trying to hook up with pretty girls and “men are stupid but women are bitches” themes that I was so tired of last year. In fact, this really seems like a sitcom that would have been on last year, when we saw an epic glut of emasculated men shows, like How to Be a Gentleman and Man Up! and Last Man Standing. Ugh. And, lest we all forget, that horrible cross-dressing show, Work It.

I get that men have felt this economic downturn on average more than women have. There’s a prevailing attitude right now that men are on the downslide and women are coming up in the world. Personally, I don’t think that’s true. It’s going to take a lot more than a few years of recession to erase thousands of years of patriarchy.

And I reject the idea that any successful woman must therefore be a bitch. I’ve known a lot of unemployed bitches, and a lot of spectacularly kind CEOs (okay, I’ve only known a couple of CEOs, but they were on the whole pretty nice).

The idea that a guy with a kid is inherently emasculated isn’t just wrong, it’s outdated. It’s the kind of thing we expect to hear on Mad Men, or maybe said by someone in the seventies. These days, though, it’s not weird. There’s paternal leave, dad’s getting involved, and even stay-at-home dads who don’t complain all the time and hate themselves. We’ve moved on. It’s time television did too.

I guess what I’m saying is this: man up and be a father. Stop being a little boy complaining that he’s missing playtime. It’s not cute.