There comes a point in pilot season, usually a lot later than this, when everything starts to look like shit. When you’ve seen so many shows and so many stupid pilots that are stupid and boring and repetitive and stupid that you just don’t care. And when that happens, it becomes very difficult to tell if the show you’re watching is bad or if you’re just cranky.

Today’s venture into the swamp of mediocrity that is network television (really cranky, sorry) is Mob Doctor. The plot of the show is in the title, and I hate that. It’s about Dr. Grace Devlin, a Chicago doctor, who owes a debt to the mob and therefore has to treat gunshot wounds and stuff. Oh, and try to kill an expert witness who’s going to testify against her mob boss.

It’s all frightfully obvious stuff. Grace has strong moral principles, as we can see when she yells at her boss for ignoring a patient’s condition, but she can succumb to the problems she’s in. And, of course, she’s only in debt to the mob because she asked them not to kill her brother.

Look, I want to like procedural shows. I even do like some of them. But I can’t stand a show that seems to think its audience is disposable. There is nothing in this show that is unique. The entire plot seems to have been cribbed from an episode of House. I’m not being figurative. There is literally an episode of House with this plot, it’s just a lot funnier and involves more Hugh Lauries. Which is good. 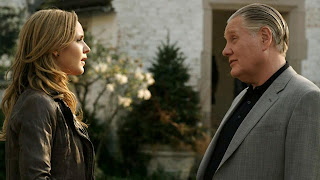 Part of the problem with the show is that the casting is atrocious. Jordana Spiro, who was great in My Boys and is a fabulous comic actress, sinks as the dour Dr. Devlin. She’s supposed to be some sort of gruff, attitudinal hotshot doctor, but unfortunately just comes across as annoying.

The other actors are generally fine, but no one stands out. Their characters are underwritten and immediately forgettable. Pretty much you get Grace, the mob boss, that other mob guy, and Grace’s mother as the characters to remember. Not a whole lot.

And from a purely technical standpoint, the show feels unfinished. Some of their science was wildly wrong, and if I notice that the science is wrong, then it’s pretty bad. A whole diagnosis rested on the existence of a young girl’s hymen, which is stupid and also ignores the fact that for the past forty years most women have been born without or with incomplete hymens. This even glosses over how unnerving that storyline was regarding consent issues, pregnancy, and emotional trauma. Did not like. 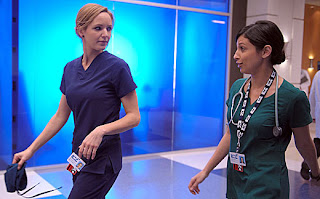 There were three medical plotlines running concurrently, alongside plots about Grace’s relationship with her family, her boyfriend, and the mob. That’s just not good writing. In all the bustle, we got absolutely no idea of who Grace is as a person. Instead, she just came off as irritating and dull. I don’t think I need to explain why that’s a bad thing.

I don’t want to sound all harsh on this show. It wasn’t the worst thing I’ve ever seen or personally offensive. It just wasn’t very good. It lacked a single spark or memorable thing to hold it in place. The internal logic of the universe made no sense, the acting was subpar, and the plots were obvious and predictable. Even the final twist was not hard to see coming.

Overall, I give this show a C for effort, because it really doesn’t feel like they were trying too hard. If I were flipping channels and landed on it, I’d consider finishing out the episode. I think that’s the best I can say here.