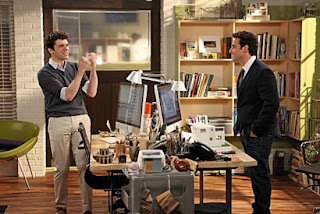 Most people can identify the sorts of things that go into a CBS sitcom. It’s multi-camera. Shot on a sound stage. Live studio audience. Quick jokes with pauses for laughter. Really obvious premises.

Well, you’ve pretty much just described Partners, but I have to say that so far this is the show I am most mixed up about.

The premise is really simple. Made by the creators of Will and Grace, the show features wacky odd couple Joe and Louis (David Krumholtz and Michael Urie). The two childhood best friends now live near each other and run an architecture firm together. They’re successful, happy, and both have loving significant others: Joe has his gorgeous girlfriend Ali (Sophia Bush), while Louis has his equally gorgeous boyfriend Wyatt (Brandon Routh).

Everything is going fine until the day that Ali drops an ultimatum on Joe: marry her or break up. Naturally, Joe freaks out. Louis counsels him through it, and Joe decides to break up with her. But, of course, when he tries, he realizes how much he loves her and proposes instead. 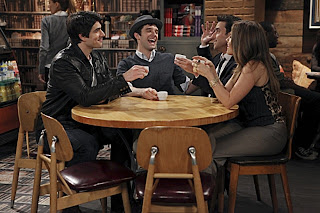 That’s all lovely, but the next morning in yoga class, Louis tries to comfort Ali through her heartbreak, which spills the beans. Ali calls off the engagement, and Joe freaks out on Louis. There’s lots of wailing and gnashing of teeth. Finally, though, Louis convinces Ali to take Joe back, and there is a makeup kiss, etc. All happiness is restored.

All of this is actually just fine. Sure, is a super standard sitcom, but nothing really bothers me about it. It’s cool seeing a main gay character on a sitcom, especially on CBS. I like David Krumholtz. The story was adequate, and while the writing was definitely a work in progress, I trust these guys to actually progress.

So what’s the problem?

The problem is Wyatt. Brandon Routh has literally nothing to do on this show. He appeared in only three scenes, all of which were painful, and added nothing to the story. It kind of stinks.

Routh is a good actor, and I even think he’s right for the role. He’s got a big puppy attitude about him, which fits the character, who is supposed to be Louis’ super laid back boyfriend. Wyatt doesn’t even mind when Louis goes around telling everyone that he’s a doctor, instead of the truth, which is that Wyatt is a nurse and perfectly happy with that, thanks. 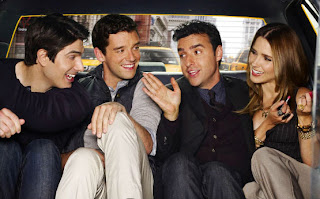 It really serves to highlight the flaws in the writing for this show. While the show worked just fine and got everyone to the places they needed to be, it largely failed to deliver on conflict. All of the drama was incredibly overt: Joe and Ali are in a fight. Joe and Louis are fighting because of Ali. It’s all incredibly clear.

What isn’t clear is where Wyatt fits into this. As the only cast member without a storyline in the first episode, it becomes very difficult to figure out what Wyatt is supposed to be doing as the story progresses.

He doesn’t want anything, he doesn’t need anything, and he doesn’t appear to have any deep dark secrets. His one funny habit is being blissfully un-self aware, which actually makes everyone else just seem mean for picking on him. Yes, he says things like, “I have a heart on today,” completely ignoring the ways that sentence could be misinterpreted (say it aloud), but he’s so blank and puppyish you actually feel bad that anyone pointed it out.

I think this has the potential to be a solid series. All of the actors involved are the kind of unshowy workhorses that make sitcoms great. It’s a solid, if boring, premise, and there is real potential for drama as the significant others war against the titular relationship. It’s a show about attractive young people living in a big city. It’s got room to grow.

I just want it to actually take that room and grow, because where it is right now kind of sucks.