Pilot Season: Revolution (Will Be Televised) 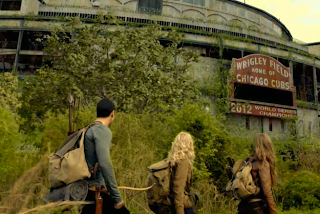 When watching the first few minutes of Revolution, the new dystopian epic from JJ Abrams (Lost) and Eric Kripke (Supernatural), I have to admit that my mind went where everyone else’s mind went: The Hunger Games.

And, really, it’s very easy to make that connection. In Revolution, we have a world where nothing technological works. Not motors, not batteries, not even pens for some reason.

Everyone is left to rebuild their lives from scratch, roiled by wars, militias, and the everyday struggle to survive. We have a protagonist, Charlie, who only barely remembers the days before the lights went out. She’s got a bow, can hunt, and is fiercely protective of her little brother, Danny. So far, pretty close.

The differences come in the way that the stories are structured. Revolution is more of a quest type show, with Charlie’s father dying, Danny being kidnapped, and her marching off to Chicago to find her uncle and make him save her family. It’s straightforward, but well done. There’s even a forbidden romance thrown in, with a boy from the militia who might be forced to follow her, but actually likes her too. And there’s a massive mystery surrounding why the lights went out and how to get them back on.

Overall, it’s a very compelling show. It’s a bit closer to Dark Angel in execution, where you see a world without power. Of course, on Dark Angel, there was still some power, physics still worked, and it acknowledged the existence of bicycles (why does no one ever remember bicycles?). Here we have a world just on the brink of being magical. Which is different, and kind of cool. But if they don’t explain the mystery I’m going to be pissed.

The far more important matter, though, is how the characters panned out. We’re going to be chilling with these people for an hour every week, after all.

Charlie is a standard YA type heroine. So far lacking in real definition, she has a basic yearning to see the world and escape the confines of her village. She loves her father, but resents her stepmother (Maggie) for trying to supplant her “dead” mother (played by Elizabeth Mitchell, so you know there’s no way she’s really gone). Charlie has a few good qualities, like the ability to be totally thrown by a cute boy (show’s she’s human) and her overwhelming hubris (refuses to accept being wrong), that tamp out her general blandness. But time will have to tell on whether or not she’s interesting. 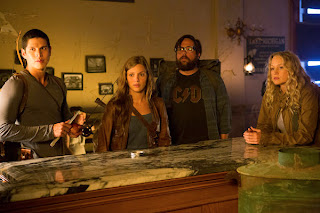 The other characters, by and large, are fairly well done. Maggie, the aforementioned stepmother, is serious, loyal, and incredibly badass when she needs to be. A doctor who carries around a bottle of poisoned whiskey, Maggie doesn’t trust anyone, but she’s determined to carry out Charlie’s father’s last wishes.

Miles, the uncle, is a rather standard mesh of reluctant hero and bitter mentor. He’s a drunk, but he’s spectacular at killing people. I just know that there’s going to be a training storyline, alongside his redemption arc. The one really interesting thing about his character was the twist towards the end, where we find that (SPOILERS) he knew the man who started the militias and who now wants him dead. That was interesting.

But it falls to the two least capable characters to be the most compelling. Danny, Charlie’s brother, is a hotheaded teen who struggles with asthma in a post-medicine world. He’s taken by the militia after his father’s death, because they believe he can put the lights back on, and his constant struggles to escape or harm them are endearing and heartwrenching. His is the part of the story where you hold your breath. 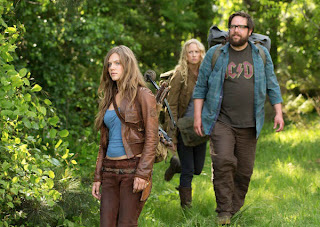 And Aaron, who travels with Charlie and Maggie, is a relatable character who brings the audience in. He was a Google millionaire before the end, and would trade it all for some toilet paper. The only character actually consumed with why physics stopped working, Aaron is one to watch. I just hope his storyline gets some real play.

Out of all the shows it reminds me of, though, the one that comes closest is Supernatural, which is unsurprising, given the Kripke involvement. Here we have a broken family, an epic journey, unknown forces against them, and a tight sibling bond. Hell, Tracy Spiridakos, who plays Charlie, is a ringer for Dean Winchester. And I hope it does follow in Supernatural's tracks. After all, that show's about to get its eighth season without showing signs of age. Not too shabby.

All things considered, it’s a good show. I’m going to watch the second episode next week. I’m even a little excited about it. Would I be happier if Charlie were more interesting than a bowl of tapioca pudding? Of course I would. It always strikes me as a tragedy when the protagonist (especially the female lead) is given no other personality than the desire to complete her quest and further the plot. But I’m going to give this at least a few episodes to get there.