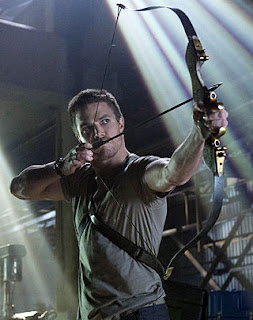 Okay, if you watched Smallville and liked it in the slightest, I’m just going to skip over the rest of the review and say that you’ll probably like Arrow, so you might as well just start watching now.

For the rest of you who (like me) found Smallville insufferable, except for Michael Rosenbaum who was easily the best part, Arrow is a slightly harder sell. It focuses on Oliver Queen, who actually did appear on Smallville, the billionaire turned vigilante, because there aren’t enough of those already. Queen is sort of a Robin Hood character, devoted to social justice and very fond of his green costume and archery skills.

Played by Stephen Amell, Oliver Queen is a brooding, deep, troubled young man, who’s just come back home after being stranded on a hostile island for five years. There was a shipwreck, a bunch of people died, he’s been fighting monsters in the jungle, etc. You know the drill. It’s superhero backstory number seven, just after alien being and before trained assassin gone good.

The circumstances of the shipwreck are still a little murky. Basically, there was a storm, lightning or something hit the ship, it sank, people died. Then Oliver and his father ended up on a lifeboat with a crewman. His father got all fatalistic and determined that Oliver would be the only one to get out of there, so he shot the other guy and himself. Then Oliver washed up on an island of horrors, and his PTSD has been boiling ever since.

Also some chick died in the wreck, who happened to be the sister of Ollie’s love interest, which means there is ANGST in our futures. 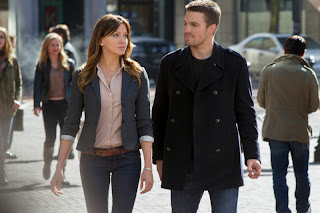 Said love interest, Laurel (played by Katie Cassidy, who was spectacular on Supernatural but keeps getting jerked around by CW casting), is a plucky young reporter fighting to right the wrongs of the big city. She’s unfazed by money or fame, and her father’s even a cop! Actually he’s the Chief of Police, I think, played by Paul Blackthorne. They really swung for the fences on casting here. Her dad hates Ollie. Which makes sense because Oliver did kill one daughter and break the other’s heart.

Okay, he didn’t technically kill her. But he sure didn’t help.

Anyway, Oliver comes back to the city with a list that we can assume his father gave him. The list details a bunch of wealthy industrialists who’re mean and stuff. You know, the guys we protested in Occupy Wall Street. It’s a bit disingenuous, given that Queen, like Bruce Wayne, Lex Luthor and Tony Stark before him, is filthy stinking rich, and as with all those cases (except Luthor) their point would be better made with social reform and funding infrastructure. But who cares! Superheroes! 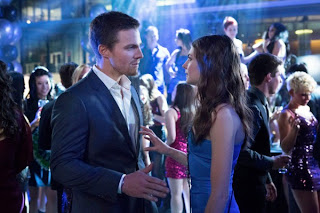 Susanna Thompson also pops up, playing Ollie’s mom, and she is, of course, a bit villainous in some unspecified way. We are supposed to assume, I guess, that she’s somehow profiting off of his death, and now that he’s alive, she’s less than thrilled. Comic fans will love the addition of Oliver’s sister, too, who is nicknamed “Speedy” and has a – that’s right – drug problem. Oh the seventies.

Mostly, though, it’s an average show. It has, like most superhero stuff, the potential to be truly great. If Amell ever learns that there’s more to acting than brooding at a window, and if Cassidy finally gets a role that’s more than plucky support-girl, we’ll really have something here.

From a logistics standpoint, I do think this is a show that will probably do just fine. It’s got an immediate audience of all the Smallville watchers, is paired with Supernatural, so it might get a bump off their rabid fanbase, and it’s probably pretty cheap to make. So, good job CW.

Sorry. Not a lot of enthusiasm for this one. But it’s solid.