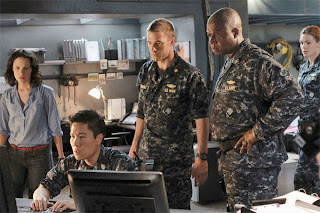 Ever since Lost ended, the networks have been trying to replace it. They’ve used fairy tales (Once Upon a Time), aliens (Falling Skies and V), weird places (The River), and time travel (Flash Forward). A fair number of them have used Elizabeth Mitchell, who is now on board at Revolution, yet another claimant of the throne.

But the way I see it, there is a true Lost heir, and it’s not the one you think. It’s Last Resort.

Last Resort is a firmly non-supernatural thriller show starring, above all others, a submarine. When the submarine’s crew receives suspicious orders to nuke Pakistan, they rebel, and for questioning their orders, they are fired on by US ships. They have to flee, making their way to a small island off the coast of Africa, and taking over the NATO observation base there.

The cast consists of a few recognizable names, but no one big. Andre Braugher plays the sub’s captain, a solid military man who is willing to go to extreme measures when pressed. Scott Speedman is his XO, in a likable everyman role, toughing it out when he realizes he might never see home again. And Dichen Lachman is a mysterious islander who runs the local bar and has yet to have a word of dialogue. 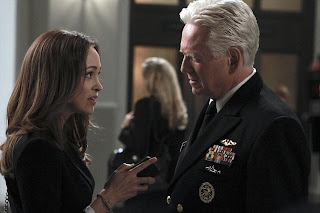 When I say it’s like Lost, I don’t mean that there’s a smoke monster or a hatch, and there definitely isn’t a battle between good and evil that’s totally overt. At least not yet. Instead, I mean that this is a show about a bunch of interesting, complex characters, stranded away from home, with only a limited idea of what is going on in the world outside, and fraught by a dangerous conspiracy that could take them out at any time.

That is what I call good television.

The show succeeds because these characters are in the pressure cooker. Is Scott Speedman going to make the right choice about whether or not to fire that missile? Is the pressure actually getting to Andre Braugher when he talks about making a new country? What the hell is going on with Dichen Lachman?

You watch because you care about these answers, and the show is successful in that it’s created a compelling and complicated network of half-truths and questions that the audience desperately wants solved. It’s like Lost because it’s fully engrossing. The characters, their drama, and the question of what happens next keep you enthralled. That’s all I’m really asking for in a show. 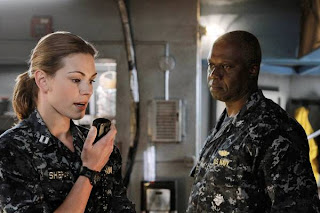 Now, are there problems? Obviously. No show is perfect, no matter how much I harp on about it (Community, Firefly, Sons of Anarchy anyone?). Last Resort suffers from too-many-characters-itis. I genuinely have no idea who a third of these people are, what they want, or why they are being given this much screentime.

But, that’s a minor complaint, all things considered. The plot is solid, the conspiracy isn’t advanced enough to be showing cracks yet (though it inevitably will, you just have to accept that with conspiracy TV), and the acting is simple and compelling. No glory hounds or scenery chewers here. Again, yet.

If you’re looking for a show that will drag you up by your guts and pull you along, this is a good bet. Sure, there’s some problematic stuff with implied rape jokes and a character stripping while giving exposition (which is just cheap writing), but overall, the show works. It’s got main female military characters who don’t grate on your senses. Lt. Shepherd is pretty cool, all things considered, and the show knows enough to show us her strong side more often than her vulnerable one.

But seriously show, why the hell hasn’t Dichen Lachman said anything yet?!