Pilot Season: The Neighbors (This Is How You Do Social Commentary) 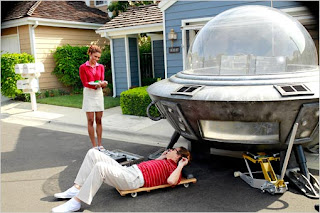 Okay. Cards on the table. I enjoyed the shit out of The Neighbors.

This kind of surprised me because, one, I haven’t really liked any new comedies this year, and two, it’s not been getting very good reviews. Everyone seems to think that it’s hokey, too tame for ABC even, and doomed to failure. Which really sucks, because I’m pretty sure this is the most original sitcom we’ve seen in a while.

Let’s break it down. The Neighbors is about a nice normal family who move to the suburbs and discover that all of their neighbors are aliens. Admittedly, that does sound more like the premise to a Disney pilot, but the show works with what it’s got. The aliens are very funny, there are a lot of fantastic running gags, and the actors (though literally all of them are relative unknowns) are fantastic.

But more than any of that, which is not to poo-poo it either, The Neighbors is the rare comedy these days that manages to be both heartwarming and funny. That’s impressive. 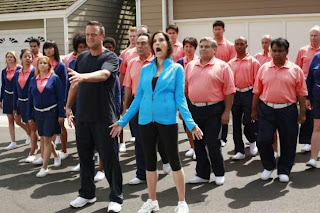 It seems more common now that you get one or the other. Either you have a smarmy, self-satisfied preach-fest like The New Normal, or you’ve got a cynical, bitter snark-fest like Animal Practice. You almost never get both at the same time.

So, really, in a strange way, this show reminds me most of another recent comedy that starred almost no one you knew (except Cloris Leachman), and is doing just fine. It reminds me of Raising Hope.

What made the Raising Hope pilot, and really the whole first season, so damn watchable was the way the show treated its characters. The Chance family are not smart. They are not rich. And they are not particularly touchy-feely. But damn do they love each other. Although it was rare to see a scene where either of Jimmy’s parents hugged him, or where there wasn’t at least a little teasing and some hair-raising references to Jimmy’s fraught childhood, you always knew that this was a family that loved.

It’s pretty much the same deal in The Neighbors. Now, admittedly, the focus is less on the actual family and more on their situation, but the way that the show is dealing with these characters is very familiar. Debbie and Marty fight a lot. She’s mad that he doesn’t seem to take her concerns into account and is constantly trying to fight her for dominance in the family. He’s frustrated because he thought she wanted him to do that. Their kids are pissed because they’ve just moved to a new neighborhood and it’s really weird.

But you never forget that this is a family that loves each other. 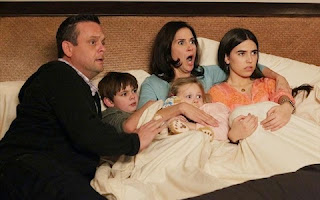 In a lot of ways, this does feel like an older show. It’s very reminiscent of 3rd Rock from the Sun, which was awesome. Aliens confused by our humanity but desperately wanting to understand it.

The pilot episode deals with the way that the aliens are looking for a reason for their place on Earth, and trying to grapple with the human feelings they have. It’s all pretty cool to see, even if it does feel dated. For some reason, those aren’t things we get to see on TV much these days.

The Neighbors does feel retro. But the good kind of retro. The best kind, actually.

This even fails to mention that the show is pushing the envelope, and I’d argue more than shows like The New Normal do. In this series, we have a husband and wife who challenge perceptions of gender normativity. Jackie fertilized Larry so that he could bear their children. It’s mentioned casually and normally, and in comparison to the fact that they’re aliens, the humans on the show accept it as just another thing. It’s not weird. Not compared to them all being green lizard people.

By focusing on the outlandish premise and the little jokes surrounding it (the aliens thought it would be a great tribute to Earth to name themselves after its best athletes), the show is allowed to go to extreme places in its social commentary. It all comes off as so harmless and charming that you hardly realize you’re being given a sociology lesson on your own culture.

That’s what good pop culture does. It doesn’t preach or shove it down your throat, it just pings the back of your mind while you’re busy laughing your butt off as a posh housewife repeatedly says “poopod”.

I never said this was a sophisticated show. Just a good one.