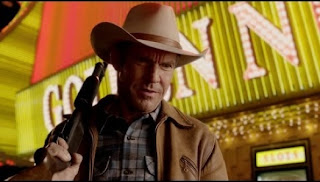 Sorry this is a bit late, I happen to have flown halfway around the world yesterday, so I slept in this morning. And afternoon. Yeah. On second thought, I’m not sorry.

Vegas is a new show from CBS that combines the best elements of Boardwalk Empire with the procedural elements of a cop show, and douses it all with a nice helping of 1960s Vegas dust, for a show that doesn’t feel very original, but is quite watchable. It’s not the new Mad Men or the new CSI, and it’s definitely not the new Sopranos. It’s just a one hour drama about cowboys solving crimes and fighting with mobsters.

Our hero on this show is an honest cattle rancher, played by Dennis Quaid. His character, Ralph Lamb, is irritated with the way that the expansion of neighboring city Las Vegas is starting to hurt his business. At the same time that he’s getting upset, the mayor is finding a dead body out in the desert. Said body belonged to the Governor’s daughter, so obviously they have to solve the problem quick.

With the real Sheriff out of town, though, the mayor is forced to find an honest man to investigate. He picks our hero, and the plot jumps from there. Quaid uses all of the gruff-guy charm he’s been honing all these years to play an old soldier who just wants a quiet life but isn’t afraid to threaten a few mobsters to get it.

Michael Chiklis plays one of those mobsters and presents a convincing foe. Carrie-Anne Moss is the Assistant District Attorney, and therefore invested in the city and Quaid’s success. And Jason O’Mara is Quaid’s brother, another deputy.

The real interesting part of this show isn’t the plot or anything. That’s dime a dozen. Aggressively heroic cowboys solve crimes committed by evil nasty gangsters? So complex. So deep. 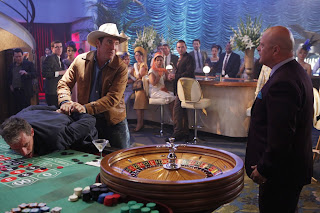 No, the actual interesting bit here is that CBS is making this show at all. It’s completely out of their comfort zone. Granted, it has procedural elements, which I’m pretty sure is the only reason they can stand to look at it, but still. The main basis of the show is that it’s a serialized drama set in the past. For CBS, this is like showing episodes of Game of Thrones. You’ve really got to grade on a curve.

The conflict on the show is promising, and it is set in a time and place that are distinct from all others. No one is going to get this confused with Mad Men, or even with Boardwalk Empire. It’s Vegas. We have a rough idea of what it must have been like as Vegas started growing in the early 60s, and it’s a cool idea to watch that on TV.

The characters themselves are a little outside of the box for CBS as well. While there is the obligatory “everyone is a cop, lawyer, or criminal”, there’s a bit more complexity when it comes to Michael Chiklis’ evil mobster. He’s a bad guy, but he’s decent to his employees, and if you don’t cross him, he’s lovely to work with.

Carrie-Anne Moss’ character as well is surprisingly complex. Not only is she a female ADA in the years well before gender equality in the workplace became a norm, she’s also highly educated, a local, clearly good at her job, and owns her own cattle ranch right next to Dennis Quaid’s.

There’s even potential that she could be a love interest for Quaid’s Ralph Lamb. Normally that would bother me, but in this show I quite like it. She’s an interesting enough character in her own right that I don’t begrudge some romance. The characters on this show do skew older than most network shows will dare to cast, though CBS has shown a comfort with older leaning dramas in recent years. You can see this in Blue Bloods and The Good Wife, both shows with middle-aged actors headlining. While they do have younger actors in active roles, these shows are focused on the problems that occur in a fully-developed life. And that’s a good thing.

The only place that I feel the show has been remiss so far is place that most shows fall down – especially period shows. The cast is rather overwhelmingly white, which is strange for a show set in the southwest. You would expect at least a few African-Americans, or new immigrants from anywhere to be showing up. This is Vegas, and it’s the 1960s not the 1860s. Show a little color!

In fact, the only major non-white character is one of Lamb’s deputies, a Native-American man who worked on his ranch. In and of itself, that’s fine, and I’d be happy for the diversity, if his role on the show weren’t to just act as the tracker and occasional mystic Indian guy. Sigh.

Really the only guy who ever pulled that off was Deputy Hawk on Twin Peaks. And that only worked because everything on that show was heightened, weird, and inexplicably mystical. He didn’t stick out at all.

Vegas is a show with a lot of potential. It’s straddling some good genres, and it avoids the many 1960s pastiche pitfalls that beset last year’s Playboy Club and Pan Am. It’s not a perfect show, of course, but it’s well worth a look if crime, conspiracy, and cowboys are your thing.