The Value of a Good Scare (Mockingbird Lane) 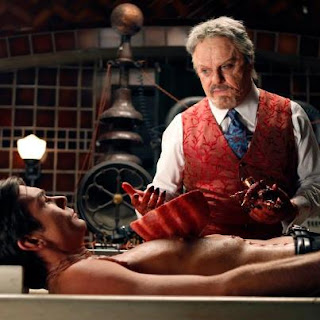 Back in the sixties, when television first started out, there was a question hanging over everyone’s heads: what should we make? What kind of programs will people want to watch? Because there had never been a television or thing like a television before, no one was really sure what to do with it. As a result, the fifties and sixties represented some of the most creative experimenting with the format that we’ve ever seen, and the things that they deemed worthwhile in those early days are the same things that we watch week in and week out now.

Technically speaking, The Munsters wasn’t really an original show. It was a knockoff of The Addams Family, and a blatant one at that. Being produced by a network affiliated with Universal, however, had its advantages, and The Munsters was able to take what they wanted from the Universal monster catalogue. So they had a Frankenstein (yes I know blah blah Frankenstein was the inventor no one cares), a Wolfman, and a couple Draculas.

What really separated it from Addams Family, though, was that it had real heart. While The Addams Family relied primarily on ghoulish humor and a mildly depraved sense of what passed for normal behavior, The Munsters was more about the way that these monsters interacted with each other and with their neighbors. It was a little sweeter, and a lot more focused on the psychology of being a monster, and not just the scare tactics. 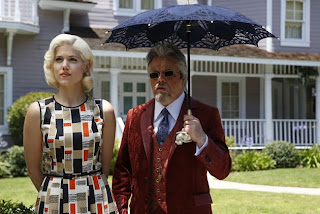 So it makes sense that while The Addams Family did a run of basic-cable/quick release movies in the late 90s, it’s The Munsters that has now been snagged for a remake.

Well, sort of. Maybe. If NBC gets its act together.

Mockingbird Lane is an updated version of The Munsters that aired its pilot episode on Friday night. Since NBC has no money, a situation we’ve discussed at length previously, it’s highly likely that this will be the only episode we ever get to see, which is a real shame.

Starring Eddie Izzard as Grandpa, Portia de Rossi as Lily, Charity Wakefield as Marilyn, and Jerry O’Connell as Herman (and some random kid as Eddie), this is a fully updated Munster family. Part of the humor actually comes from the way that the Munsters, monstrous though they may be, are actually just a normal squabbling family trying to deal with their issues.

Herman and Grandpa butt heads over whether or not to tell Eddie that he’s a werewolf. Marilyn looks for her place in a family of monsters, when she’s the odd one out for having been born normal (and apparently having her mother try to eat her as a baby). Lily worries that she’s not a very good mother. Herman’s heart is giving out, again. Grandpa wants to eat the neighbors. 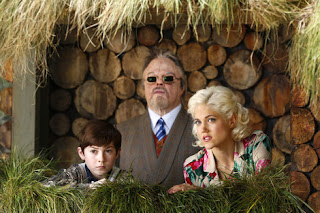 It’s all dealt with very deftly, balancing the humor at this wacky clan alongside the pathos of trying to figure out who you are in a modern world that doesn’t seem to admit you exist. The pilot episode focuses that angst on a barely pubescent Eddie, whose last camping trip with the scouts was interrupted by a “baby bear attack”. Unbeknownst to Eddie, that was actually his first werewolf manifestation.

Eddie desperately wants to be normal, like Marilyn, while Marilyn is busy justifying her very existence to Grandpa, who sees her as a sort of cosmic joke and infinite disappointment. It’s a meditation on what it means, exactly, to be a person, even if not precisely human, a fact made all the clearer as Herman (the Frankenstein monster) struggles with a failing heart, worn out because he loves too much.

Okay, you might think, all of this is nice and all, but it’s only one episode. Who cares whether this comes back or not?

Well, first of all, you should care because this show is great. I mean, really truly great. It has heart, wit, great writing and good performances. We should really reward that behavior, don’t you think? Besides, it’s a perfect Friday night show, and NBC really doesn’t have anything else they’re going to do with that time. I mean, I know it’s a show that will cost a lot of money, but it has potential to do for them what Once Upon a Time did for ABC. 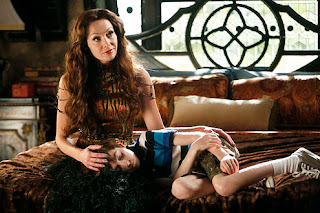 More than that, though, Mockingbird Lane is important because monsters are important. Monsters are the demons that we created because we needed something to fear. Being afraid isn’t just an irritating side-affect of darkened movie theaters and abandoned parking garages, it’s a fundamental aspect of our humanity.

When we’re scared, we learn a lot more about ourselves. How we deal with stress is a part of it, but it’s more about what’s important to us. We learn whom we really care about and what we’d do to keep those people we love safe. Sometimes we’re happy with what we find out. Othertimes less so.

There’s a side aspect too, though. Monsters help us define ourselves in relief to them. They are monstrous and we are not. But sometimes it’s good to get the monster’s point of view. Whether it’s a silly little show like this, or a heavy retelling of a classic tale, like Grendel, finding out what the monster thinks is just as important as the story itself.

When we define ourselves in opposition to monsters, we create two categories, us and them. This is useful when there’s an axe murderer living across the street. We are nice and that is not. But it’s less useful when we deem monstrous someone who isn’t at all.

The Munsters remind us that even monsters are people too, something we could do with remembering in a time when xenophobia is rising rapidly and the American public is being told at every turn that the world isn’t safe for us. Fear has its place, but so too does respect and tolerance. And Mockingbird Lane reminds us to enjoy those in equal doses.