A Punch to the Jaw of Sexualized Violence (Haywire) 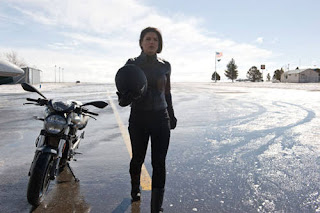 When the movie Haywire came out, there was a surprising and mixed reaction from the audience. On the one hand, most people were pretty stoked to see a female protagonist action movie that didn’t look fake (because it wasn’t), and on the other, it seems a little awkward to watch a movie that is essentially just a lady getting beat up for an hour and a half.

Both of these are pretty valid points, really. I mean, I like me an action movie where I can see a really competent woman kicking butt, but I also like knowing that she’s not being victimized. What to do?

As always, the solution is simple. I had to watch the freaking movie and decide for myself. So, here goes.

But first, some backstory. Haywire was famously conceived when director Steven Soderbergh went to see an MMA match and was able to witness champion fighter Gina Carano demolish her competition. It occurred to him that she was very good at the whole fighting thing, and not altogether bad to look at either. So he wrote a screenplay for her, cast Ewan McGregor, Channing Tatum, Michael Douglas, Antonio Banderas, Bill Paxton and Michael Fassbender, and went to work. 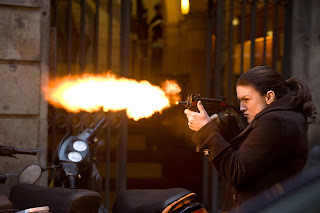 The plot of the film follows Mallory, a talented military contractor who’s been set up by her old boss and is now being hunted down. It turns out that she was set up because she broke up with him and decided to leave his company, and he was jealous / afraid she’d steal all his business, so he decided to have her killed. That’s not the important thing.

The important thing is that the movie is really just an excuse for Gina Carano to beat up your favorite actors for an hour and a half. Which she does. With gusto.

Now, it seems like it’s all smooth sailing from here, right? If Carano is just a female action hero kicking butt, then why all the fuss? She’s cool, and it’s just some mindless violence, right?

Not so fast. As with all things, we have to look a little closer. The motivating factor in the movie is simple and a little skeevy: revenge. Kenneth (McGregor) is mad at Mallory (Carano) because she left him. At its heart, this story is about a relationship gone bad. This sexual connotation, that Kenneth is killing Mallory because she turned him down, makes the whole film feel a bit like a domestic dispute. The ugly kind, where someone invariably ends up in handcuffs and the other person is in witness protection.

What saves this from being a really uncomfortable journey into Lifetime movie territory is Mallory herself. Mallory is never a victim, not even when Michael Fassbender is kicking her against a wall. She is always a competent fighter, and she always comes out on top. So there’s that. 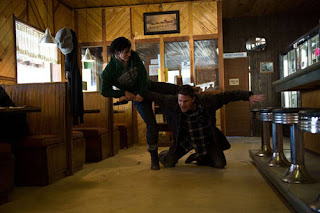 There’s also, though, a complete and utter lack of sexualization in the violence. In most action movies, even ones with “strong female characters”, the violence these characters face is extremely gendered. They are choked so that we can see their heaving bosoms, or they are stabbed in a way that is awfully reminiscent of rape, or they’re crippled in some ways.

What I’m saying is that in a lot of films, the violence against women seems to be more a facet of them being women than of them being enemy agents that need to be taken out. The violence factors in their femininity and reacts accordingly. So a lot of it is very uncomfortable, sexualized, the gasping last breath and the torn clothes and the smeared lipstick. You see it a lot.

But Haywire isn’t like that. It makes no bones about this being violence and aggression, and makes it clear that Mallory can hold her own. Even when Gina Carano is squeezing Michael Fassbender’s neck with her thighs (which was super impressive, by the way), it never feels sexual. It’s just a fight.

This is not to say that Mallory is in any way a desexualized character. She’s clearly comfortable with herself and her sexuality, and we have multiple references to that fact in the film. Not so many as to be uncomfortable, but enough so we get it. She walks around in a flowery bathrobe. She has fitted shirts. Mallory is a woman who is totally chill with herself, and is capable of taking out anyone who gets in her way. I like that in a protagonist, don’t you? 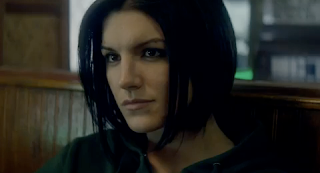 There is one other beef I have with the film, which I do feel the need to air. While it is beautifully shot, artfully told, and impressively cast, it’s still lacking the one thing that would make me love this movie: another woman with a speaking role. Or even on camera. Outside of crowd shots and a waitress, there is only one non-Mallory female soul on screen for the entire hour and thirty-two minutes of this film. And she’s a prostitute.

Look, I’m not expecting mountains here. I just wish that at some point in her great revenge mission Mallory might have run into a woman who wasn’t either sleeping with Antonio Banderas, or her. Once?

But that’s my biggest complaint. When it comes to a female action hero that I actually really buy, and who I think is cool and worth appreciating, Carano’s got it nailed. She might not be the world’s best actress, but she gave Mallory a strength and certainty that most actresses wouldn’t have. She made Mallory completely fearless, and therefore made the violence nonsexual, and just impressive.