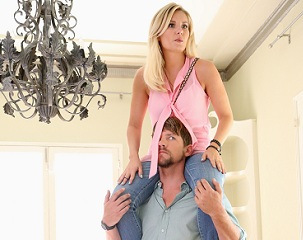 Okay. I know I used a lot of buzzwords in the title to this entry alone. But I think this is something we need to address: when does a show cross the line between “aspirational depiction of success” to “absolute glorification of excess and consumerism”? Because I’m pretty sure, wherever it is, Happy Endings has crossed it. And that makes me feel sad.

This week’s episode of Happy Endings (well, more accurately, the most recent one – I’m behind and catching up on Hulu) featured not one, not two, but three individual storylines involving purchases and consumerist behavior that was not for necessity but for desire. Basically, while the episode was really funny and everything, it was all incredibly trivial.

Let’s break it down.

Alex and Dave, who have mistakenly gotten back together are looking to buy a new apartment so they can move in together. I understand this impulse a little bit, since it makes sense that their previous place wouldn’t work because of the shared memories (and because it’s still under construction, I guess?), but I don’t really understand why they need to buy a massive apartment. Or why they’re moving in together at all. But that’s a separate problem.

The real thing comes down to the continuing issue of unrealistic apartment portrayals in film and TV. Friends had that massive apartment that was laughably cheap and seriously no. Seinfeld had some nice ones too, and Will and Grace stretched the bounds of probability, even for people with roommates. At least HIMYM hangs a lantern on it by explaining that the apartments seem huge when you’re living in New York and everything is tiny, but when you actually look at them, they’re miniscule. 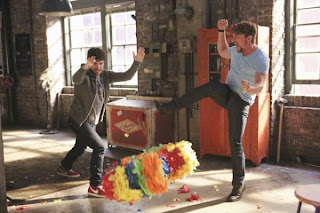 It’s especially egregious in this show, though, because we know that neither of the characters involved really has that much money to throw around. Alex has a boutique that no one ever seems to go to and an apartment under construction. Does she own that whole building? Isn’t that expensive? Where did she get the money for that? She’s not exactly Warren Buffett. Or even Donald Trump.

Dave, for his own argument, runs a food truck, quit his full time job, and has been living in a cheapo loft with a friend. It’s heavily implied and at one point outright stated that he has no savings, and the whole foodtruck thing was a result of his selling a bunch of stuff to make the money. You aren’t trying to tell me that a foodtruck makes enough to buy a two bedroom two bath apartment in a nice part of town. Surely you jest.

So that storyline comes off as a little egregious. The other sets are very nice and actually make sense contextually. Penny has a nice condo because she’s got a good job and no dependents. Brad and Jane have a really nice place because they both work psychotically high powered jobs and are barely ever around to enjoy it. They’re still overly nice, but it’s a more logical overly nice, if that makes any sense. (It doesn’t.)

The next storyline down is all about Penny buying a new car and Jane helping her get a good price. And, again, it’s super funny because Jane is hilarious, and Jane being able to manipulate people and be cutthroat is my favorite thing ever (Eliza Coupe, be my friend), but it’s got a weird tinge of consumerism to it for one simple reason. 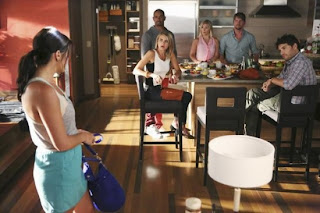 Let me put it this way. I drive a 1998 (?) Ford Escort that is not actually mine. It is being generously (and I mean that in total honesty, I am really grateful for this car) loaned to me by my friends, and I do my level best to keep really good care of it. It’s a stickshift, keyed up, banged around car with a tape deck and fantastic gas mileage.

If I had the money, would I replace it? Probably, but only if I needed to. I have a car. It runs. I’m not super concerned with upgrading. I don’t actually need a new car. In fact, I don’t really know anyone who buys a car just because they want a new car. I literally cannot think of a time that’s happened to someone I know.

There’s an immediate disconnect from Penny’s storyline, because not only does she explain that she’s buying a new car without giving a reason for such a big purchase (the car she has is dying, has been totaled, even she’s trading up for better gas mileage), she also makes the announcement that she’s buying a new one while sitting inside a nicer car than I have ever owned and probably will ever own.

More importantly, it’s not very relatable. Now, don’t get me wrong, it was a really funny plotline. But watching Jane take the car dealership to the cleaners is only so aspirational when you don’t need the car to get to work tomorrow. It’s a lot easier to bargain when the sale actually means nothing to you, when you’re just throwing money around. In fact, we see several times that Penny’s willing to pay the sticker price for the car, which is first of all ridiculous, and second of all, just heightens how much money she can throw at this new car she doesn’t need. 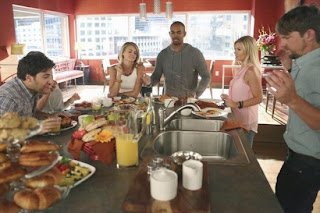 The third and final plotline from this very uncomfortable episode followed Max and Brad as they tried to recreate Brad’s Saturday activities without spending any money. Now, the actual plotline had more to do with Brad’s feelings about being out of work, and how he doesn’t want to go back to crazy person hours, but he does want a job. The framework, though, is killing me.

Brad needs to find something else to do with his Saturdays because now that he’s out of work he and Jane have had to cut back a little. So no more personal trainer or weekly shopping spree or visit to the spa.

Are you kidding me?!

There’s a throwaway line in there about how Jane and Brad had, up until now, been spending five thousand dollars a month on “Of the Month” clubs. Like, Wine of the Month, etc. Five thousand dollars. I mean, I get it, it’s a TV show, haha that’s funny, but come on. That’s more than I made in my first three jobs combined. Total.

I guess what I’m saying is this: I don’t expect every sitcom to be Raising Hope. I don’t need accurate depictions of financial conditions, or stories about deprivation or stuff like that. TV is a world of endless fantasy, and I get that. I mean, I do think there’s more room to mine for real world humor, like Roseanne and My Name Is Earl did and other shows continue to do, but there’s nothing actually wrong with a little aspiration.

It’s when it becomes a fetish that I hate it. When literally every story is about needless consumption, when nothing is actually important, when the characters live in a protected little bubble untouched by the outside world, that’s when it bugs me. That’s when I start screaming, “GET A JOB YOU WORTHLESS BUMS!” at the television, and making my roommates worry.

And this is coming from a jobless bum*, nonetheless. 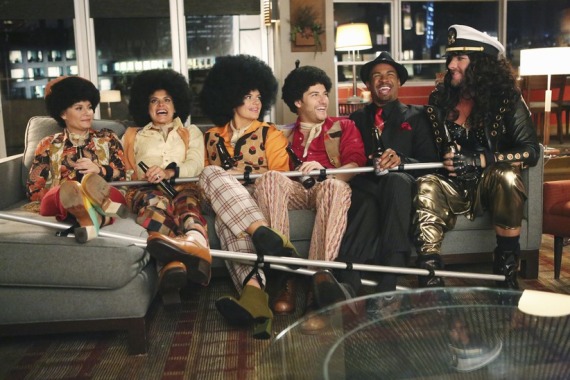 *It's complicated.
Posted by Unknown at 9:00 AM