Ladies of Layer Cake (And Why the Bechdel Test Matters) 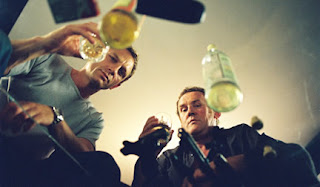 Despite mentioning it pretty regularly here on the blog (and making it a tag and section in the movie reviews page) I don’t think we’ve ever actually gone into what the Bechdel Test is, and why you should pass it.

The Bechdel Test is a guide for gauging the involvement of female characters in the plot, as created by Allison Bechdel in her comic “Dykes to Watch Out For”. The rule is as follows: a movie must have more than two named female characters, who talk to each other, about something other than a man. That’s it. A recent addendum to the rule was made by Anita Sarkeesian, which said that they have to talk about something other than a man for more than a minute.

It is genuinely shocking how few films pass this test. Truly upsetting. When you come down to it, this is the absolute base minimum a film could do to have female characters that are even tangentially related to the plot, and a solid ninety percent of films fail. Yuck. 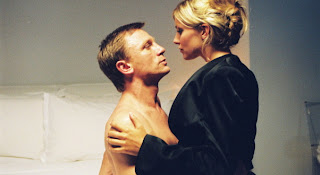 How? How do all these movies keep getting made where the women just aren’t that important, and, more strangely, why don’t we really notice until someone points it out to us? Are we all just brainwashed to hate women or something?

Not exactly. I think there’s something more insidious, and really harder to wipe out, going on here than just plain misogyny. What we’re dealing with is more a case of invisibility.

Take the movie Layer Cake, for example. It’s a crime thriller starring a pre-Bond Daniel Craig (and was considered his audition tape for Bond), where Craig plays a drug dealer looking for one more big score before he walks away from the biz forever. It goes about as well as you could expect.

Aside from serving as a who’s who for British actors who aren’t in the Harry Potter films (except Michael Gambon who plays the anti-Dumbledore), the movie is a downright terrifying look at the European drugs market, ranging everywhere from factories in Holland to shipyards in England, and the hotel rooms, bathrooms, and fine dining establishments between. 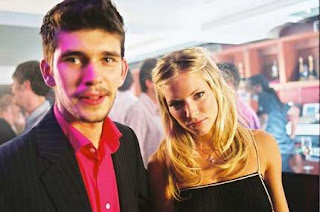 Basically the movie is a mystery, following XXXX (Craig – we never get to know his name) as he looks for his boss’ runaway daughter. Said daughter is a junkie on the run from rehab, and XXXX is supposed to bring her back in. Along the way, he has to unload some stolen ecstasy pills without getting shot or run down by the Serbians they were stolen from, and falls for an associate’s troubled but pretty girlfriend, played by Sienna Miller.

It’s a very good film, if you’re into the experimental shoot-y crime kind of film, which I am.

However, like The Lives of Others and really most other films ever, it suffers from a chronic lack of female characters, especially female characters with, like, motivations or lines. Sienna Miller plays probably the largest female role, and she is mostly just characterized by the lingerie she’s wearing, which appears on the film’s cover. 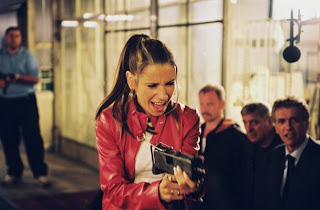 Similarly, the missing daughter acts as a macguffin for the plot, rather the same way that Bunny does in The Big Lebowski. She’s just there to get the plot rolling so that other things can happen, and we as an audience are in no way involved in her actual fate. We don’t care what happens to her, because we never see anything from her side of the story.

The only other female character of note is also in a similar position: she’s the girlfriend of one of the other drug dealers, and is really only on screen for some arguing and then her inevitable death. She doesn’t matter, she’s not a real character.

Now, am I saying that Layer Cake is a bad movie because it doesn’t have any female characters? No. That’s way too simplistic, and it really is a good film. What I’m saying is that when you have a story like this, it’s very easy not to write any women as main characters. The writers probably thought they were doing a good job by making a whole three characters female. After all, this is a story about the drug trade, and everyone knows that it’s mostly run by men, right?

Well, no. What we see here is a choice, albeit an invisible one. The writers here decided to write a movie about drugs and the British criminal underworld. Guy Ritchie has been doing that for years now. But in focusing on this area of society, they fell into a cognitive trap. 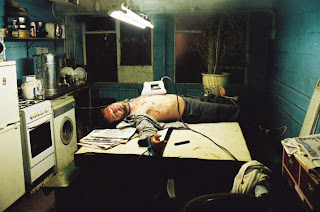 Drug dealing is generally thought of as a masculine crime. So when they wrote a story, they didn’t write any female characters as drug dealers. They went to the default in their heads, and the default was men. And, to be fair, most drug dealers really are men, at least according to all the research we have.

You can see this in a lot of crime movies, actually. Sons of Anarchy has the problem that its main female characters are all wives and mothers and girlfriends of the actual men in the club. What it does to counter this, though, is make those women have strong bonds and stories in and around the crime culture. Just because the women aren’t the principle actors is no reason for them not to be important and get some screentime.

Essentially, just because neither Sienna Miller nor Sally Hawkins nor Felicity Jones (really not kidding about how good this cast is) aren’t drug dealers themselves, doesn’t mean that they can’t still have interesting storylines.

There’s a bias in stories about stereotypically male things to either gloss over women entirely, or to make them appear, but in ancillary roles, or to just femme-wash it and pretend sexism doesn’t exist. I’m not suggesting any of these things. I’m just saying that there’s a way to have your cake and eat it too.

Give Sienna Miller something to do with her storyline, besides be worried about XXXX. Let Felicity Jones on screen for a little longer and give her some motivation. Give Sally Hawkins a few more lines. Sure, let them stay daughters and girlfriends and eye candy, but let them be interesting! Please!