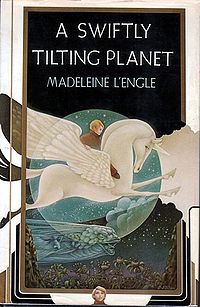 It will come as no shock to any of you that today is election day. Even if you’re not in or from the United States, there’s been an inundation of news about the election going out to every corner of the globe. It’s kind of annoying, to be honest.

So, today, instead of actually talking about the election, we’re going to talk about a book!

Not just any book, though, we’re talking about A Swiftly Tilting Planet by Madeleine L’Engle. You probably haven’t heard of this book, which is cool because it’s not well known and also very strange. The first book in the series, A Wrinkle in Time is much better known. You may remember that one as the weird book with some teleportation, an evil giant brain, and a really creepy planet called Camzotz.

A Swiftly Tilting Planet is no less weird, but slightly more pertinent today, believe it or not. It follows Meg and Charles Wallace, heroes of the first book, as they try to save the world from an evil dictator. It’s a really odd book – can’t say that enough – but it really does have an amazing message about forgiveness, fighting the forces of evil, and how one tiny action, no matter how inconsequential, can irreversibly change the course of history.

I’m going to do my best to explain it, so bear with me when it gets all bonkers, okay?

It starts late at night on Thanksgiving, while Meg and Charles Wallace (and the rest of the Murry clan) have gathered to celebrate the day. The world is a little darker because Madog Branzillo, a crazy South American dictator, threatens the world with nuclear war. It’s a theme of overarching evil that runs through all of the Madeleine L’Engle books, and like in the rest of them, it can be fought. 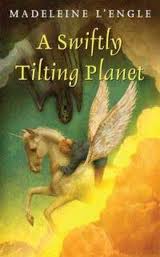 Charles Wallace is recruited to help the unicorn (said it was weird) Gaudior go back in time and change history. There are four might-have-been moments that he has to change in order to create a world that is not destroyed. To do it, Charles Wallace is actually sent in to live the lives of four different people in the past, and through their actions, create a more harmonious world. Yeah.

While he’s doing that, Meg is at home, “kything” with him (keeping in constant telepathic connection), and caring for her mother-in-law, who has suddenly taken ill. Meg has no particular like for the woman, but it soon becomes clear that Mrs. O’Keefe’s past is integral to the story, and that they can’t save the world without saving her.

Okay. That all sounded pretty nuts, right? It had prehistoric Native Americans, old ladies, unicorns, and mysterious evil forces of destruction, all prevailing through the night. Also a magic spell that is really just a super epic poem. Why should you care?

Well, today is election day. I know I said we weren’t going to talk about it, but I lied. I do that sometimes. I’m not going to tell you who to vote for, or even to vote, or even try to impress on you some deep feeling about how important this all is. I figure you’ve got plenty of people doing that already.

What I will say, though, is that no matter what happens tonight, there’s something you need to remember. Nothing, no matter how small it may seem, is truly insignificant. No action that you take is ever wasted, no choice is without purpose. Everything we do shapes our future, in tiny unforeseen ways, and it’s only looking back that we have any idea, sometimes with the hindsight of centuries. 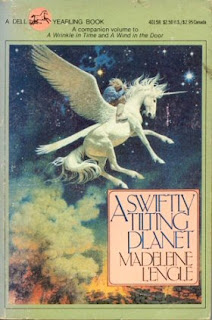 There are other issues in the book that get a little hinky. I’m not totally thrilled with the way L’Engle always portrays her main female heroine as on the verge of a mental collapse at all times (sorry, Meg), or how she keeps going back and making the Native Americans kinda white (it’s weird), but I do love what she has to say. The overall themes. The way she truly believes that good is fighting evil, and absolutely nothing we do is insignificant.

I feel a little silly saying it, too, because this isn’t something we’re really encouraged to think. More than that, it’s not something we’re really supposed to feel after about age ten. You’re allowed to believe in magic and everything having a purpose when you’re really little, but at some point, grow up! You’re just another person here on this planet of people.

Except you’re not, and growing up is really the last thing I generally feel like doing.

So, since you’re way too busy watching election coverage to read my blog, have a poem:

Seriously, though, it has unicorns and time travel. Read it, it’s awesome.