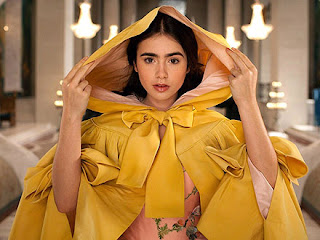 Hollywood has a tendency to go through phases. We’re just starting to come out of a vampire phase, and I think I speak for everyone when I celebrate that one. We’re in the middle of a superhero phase, which seems to be getting a bit thicker before it gets thin again, but trust me when I say that it will. We like to indulge in a bit of the fantastical, but soon we get bored and we want a different kind of fantastical. And that’s fine, really. Not overly surprising.


All of this is to say that while we are coming out of a vampire phase, we are most certainly going into, and some would argue already in, a fairytale phase. We’ve got shows like Once Upon a Time and Grimm trundling around the networks, movies like Maleficent, Jack the Giant Killer, and Hansel and Gretel: Witchhunters coming down the pipeline, and a fair spate of similarly themed movies already out.


Of these movies, we’ve actually already talked about one in particular, Snow White and the Huntsman, a gritty, semi-historical take on the Snow White story. Well, coming out around the same time, there was also Mirror Mirror, a lighthearted Disneyfied version of the same story. Which I have now watched, and bring you commentary on.


But first, a little context. I don’t think I need to tell you the story of Snow White, so I’m not going to, but I do want to discuss the idea of making a fairy tale into a movie. You see, fairy tales can be incredibly complex, and they do have the ability to tell us much more than the story itself. They can fundamentally change our worldviews, give us new insight into ourselves, and generally be an enjoyable yarn. But overall, they’re pretty freaking short. 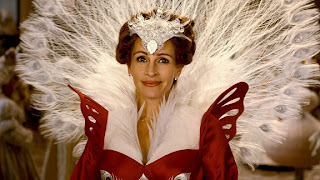 I mean, what are the actual elements of the Snow White story when you get down to it? What do you absolutely have to have in order for the story to be about Snow White?


First, you need a king and a queen and you need them to have a supremely attractive child. Which is a little creepy to start off with, but there you go. Then, you need the mother to die and the father to remarry. Again, a bit unnerving. The stepmother needs to be super vain and hate the baby Snow. Somewhere in there, usually, the father needs to die.


The corpse comes back to life, true love prevails, and the evil queen is vanquished. Skippy doo and cake for everyone.


That’s the story. The basics. What you need in order to make the story qualify.


What you don’t see in there is a lot of complexity or plot. What you really have a is a series of vignettes that could be handily got out of the way in about seven minutes, without cutting anything or giving it particularly short-shrift.


So what the hell do you do with the other hour and a half of your movie? 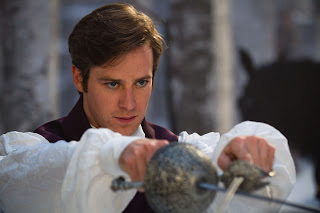 Now here’s where we come back to Mirror Mirror. Because the answer we can imply from that film is, simply, not much. There is really not a lot to do when you’re not telling the actual story.

Sure, you have a few intriguing flourishes, like the dwarves actually being bandits who use stilts, or the queen being a scenery-chewing Julia Roberts, or even the prince falling under a puppy love scene and acting like a dog for a while. But these don’t really eat up a lot of time, and they really don’t make the story any deeper. All they do is remind you that the movie is paper-thin and about to collapse at any moment.


The real gut of it is that it’s a shame they wasted their incredible cast. Not only are Lily Collins and Julia Roberts surprisingly well matched, Armie Hammer makes a very entertaining fatuous prince, and Nathan Lane sparkles as a beleaguered servant. Heck, even Sean Bean shows up as the king. What I’m saying is that this was a movie with a lot of potential. The concept was to take the Snow White story, which is pretty grim, and find the funny in it. To make it a heartwarming story, and let Ms. Roberts get a few kicks along the way. 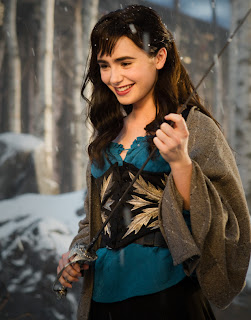 Unfortunately, it didn’t really work out like that. In focusing too much on all the cute little quirky things they could add to the story, the writers failed to add any compelling depth or reason to root for any of the characters. Sure, Snow White is charming, but so is Nathan Lane, so I fail to see how that helps here. The Evil Queen might be evil, but at least she looks like she’s having fun, so who are we to hold that against her. With the Queen clearly having a ball, and Snow set up as a self-righteous, blandly lovely person, it’s really hard to watch the movie, and, well, care. Which is rather a death-knell for any film.


In a sense, it’s a fairy tale, it’s supposed to feel fake, but that’s not the whole story. Fairy tales are supposed to be fake, but they’re supposed to feel real. Our emotions need to glom onto them, or else the metaphor they’re trying to sell us won’t take. And in Mirror Mirror, sad to say, the story never lets you get deep enough to give a crap.