Red Dawn Met My Expectations (Which Were Low) 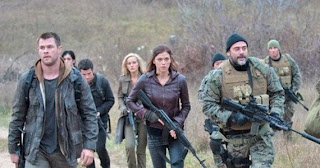 First, let me start off by saying that I am a fan of discount movie days. They enable me to see movies that aren’t quite good enough for me to actually want to spend real money on them up on a big screen. Plus, since the movies are only five dollars, I don’t feel nearly as upset if I hate them.


Which I do. Frequently.


In this case, a friend and I (the same friend with whom I saw Breaking Dawn, I feel the need to point out) went to see Red Dawn, the recent remake of the 1984 “classic.” I’ve made my feelings about the original pretty clear here, but I thought it would be interesting to see how the story was updated for a modern crowd. Plus, it’s been in production hell for so long that you get to glimpse a pre-Thor Chris Hemsworth, and that’s always fun.


Actually, cast-wise the movie was pretty freaking great. It had Chris Hemsworth as Jed, the older more experienced main character, Adrianne Palicki (of Friday Night Lights and the Wonder Woman that wasn’t fame) as the pretty girl in love with him, a pre-Hunger Games Josh Hutcherson as the nerdy kid, and Jeffrey Dean Morgan (Supernatural, The Losers, my dreams) as the grizzled Marine they find. Also it has Drake from Drake and Josh as the leading romantic hero.


Trust me, I was as baffled as you over that casting choice. Weird. 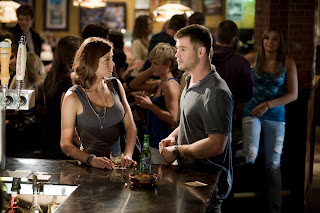 So, if you have no idea what I’m talking about so far, let me explain. The Red Dawn from 1984 featured a rugged Patrick Swayze leading a group of local kids who escape into the hills when Russians invade the US. It was the end of the Cold War, and the threat of a Russian invasion seemed not unreasonable. In fact, the Tom Clancy novel that all of this is based on is actually pretty good.


I really didn’t like the original movie, for reasons too great to mention here, but suffice to say that I did not think it was a good story, and I thought the character work was awful.


The new version has updated the story ever so slightly for our modern world. Now the invading force is North Korea, prompting a lot of confusion from the audience. Because, aren’t they like starving and not particularly populous or technologically advanced? That’s not so much propaganda as it is the general consensus of everyone who’s been there. This little fact, though, was the result of a writing faux pas. Originally the enemy was China, which at least makes sense, but was considered impolitic when the studio remembered that China pretty much owns us now.


Hence, it was changed to North Korea. This prompted literal years of rewrites and reshoots as they tried to piece it back together with North Korea as the bad guys. And as a result, it feels kind of weird.


Like the original, the basic plot follows a group of local kids who escape into the mountains when the bad guys invade. In this case, they’re from Spokane, Washington (which looks reasonably like the film, so that wasn’t bad). In the true spirit of ‘Merica, the boys (and a few girls) form themselves into a guerrilla warfare unit. Chris Hemsworth commands them with all the authority that his Iraq-veteran character can muster. It’s not an awful premise, but I can’t say it was done overly well. 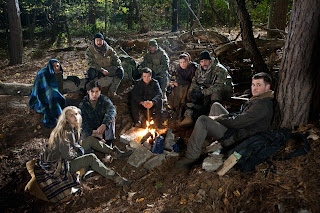 Well, no. It was better than the original in that most of their plans weren’t terrible. There was a training montage, and their campaign of terror at least made sense here.


I said something nice. There. I’ll even go further here, and say that I thought the character development was moderately better than the original. I say this mostly just because when (SPOILER ALERT) Chris Hemsworth dies, I was actually upset. Now, some of this came from an intense dislike for his younger brother, who got to survive and continue being terrible, but still. I liked him, I was sad when he died. That’s something.


But here’s the thing. I don’t think I’ve seen a movie in a really long time that was so intensely accidentally racist. Really. Really really.


Like, I could tell it wasn’t trying to be racist. It was actually trying to be pretty race-neutral. It just failed like whoah.


Let me explain. In the original film, there were no characters of color. Just, not at all. Even the bad guys were white. In this version, we have two African-American guys on our team, a pair of Hispanic siblings, an Asian enemy, and an Asian-American ally. A few of the incidental characters were of color too, and that seemed nice.


Until. Until you realized that of those characters of color, none of them, NONE OF THEM, lived through the movie.


Let me repeat that: NONE OF THE MAIN CHARACTERS OF COLOR LIVED THROUGH THE FILM.


And, of the white people, the only one who died was Chris Hemsworth. Even the dumb useless girlfriend character managed to live to the end, beating out the seriously badass medic chick who happened to be Latina. Sigh. 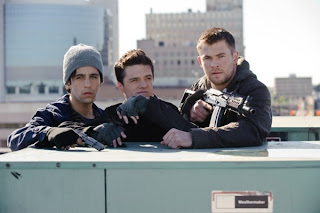 The problem with all of this, other than the obvious, is that the movie was so clearly trying to be progressive. “Look at me!” it seemed to say. “I have a multi-racial cast and several non-white actors in major roles.” What it failed to do, though, was realize that the characters it created, then killed, were less developed, had fewer lines, and were, as stated before, more dead than their white counterparts. I’m pretty sure this wasn’t malice. I think it was just stupid.


But should any of that stand in the way of you watching the movie? No, not really. The fact that it’s a terrible movie should cover that.


And, really, it is. While the original Red Dawn carries through on the strength of Cold War fear and a really rousing tale of success against great odds, this one has to deal with our more cynical society, a script that’s clearly been amped up to go with our more explosion-demanding movie demographics, and a much murkier antagonist. It’s hard to root for the Wolverines unambiguously, because you have no clear idea what they’re fighting for or against. And in a movie like this, that really does matter.


More than that, though, I really didn’t like it because I never got a strong sense of any character outside of their immediately apparent description. Chris Hemsworth is the emotionally damaged Marine. That’s it. That’s all he ever is or does. Josh Peck is his little brother who is in love with some blonde girl. Again, that’s it. Adrianne Palicki has a crush on Chris Hemsworth. Josh Hutcherson plays a nerd. Nothing earthshattering, nothing complex, nothing interesting in the slightest. 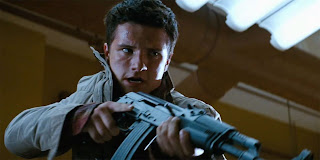 On paper, it makes sense to update this story for the current day. We live in scary, dangerous times, and it makes us feel good to hearken back to the days when we might have been terrified, but we knew who we were afraid of.

In translating this story for a modern audience, however, not enough concessions were made the real ways our world has changed in the past thirty years. We have cell phones now, or at least walky-talkies. Do you really think that the US government would take months to get out an invading force? Do you realize how built-up our military-industrial complex is these days?


And, for that matter, I don’t think we’re really afraid of being invaded anymore, if we ever were. Right now, we’re afraid of terror cells and panic in the streets. Martial law, the slow chipping away of our personal liberties, and cyberterrorism. The idea of a nation just invading us by force is almost quaint.


I guess what I’m saying is this: if you want a movie that condescends to you, is accidentally racist and reasonably sexist, and doesn’t make a whole lot of sense, go see Red Dawn. If you find all of those things objectionable and annoying, but still want to feed your paranoia about the dangers facing America, just go watch Homeland. Much more satisfying.