Shooting Yourselves in the Foot, You Know (M in Skyfall) 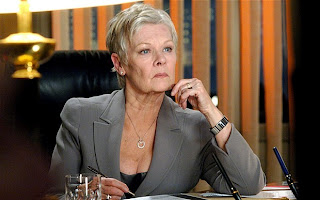 My apologies for the lateness of this post. It was supposed to go up yesterday, but the internet went out. Oh well. It’s not like we’re doing brain surgery here.

A few weeks ago, I gave you my thoughts on Skyfall and how it was pretty sexist and very rapey. But a few of you were cagey enough to notice that I didn’t say anything about the film’s portrayal of M. Good job! I decided that it pissed me off to warrant it’s own special entry.

My problem with M in the movie is this: she sucks. Specifically, she is a weaker character than she was in the previous two films of this set, and her character deterioration even goes so far as to undermine the point the movie is trying to make about her.

In the first two Daniel Craig Bond films, M, played by Dame Judi Dench, is an elusive figure. We know that she’s the head of MI-6 and takes a keen interest in the special branch. We also know that she’s tough as nails and could easily do Bond’s job if she weren’t so busy running the country. 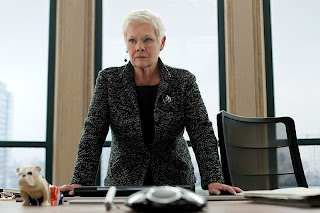 That’s M. That’s the woman that we’re introduced to. I want you to remember that, because Skyfall did its level best to kill that.

The first thing we see of M in Skyfall is her making the wrong choice. Bond is going after a terrorist with a list, and she both tells him to leave his fellow agent to die, and tells Moneypenny to take a shot that could kill him. We are told by the narrative that both of these things were bad things to do, and that when Bond goes missing and is presumed dead, that’s her punishment. She’s just getting what she deserves.

As the story continues, though, M keeps getting punished. Whether it’s the destruction of the MI-6 building, or the inquiry into her actions, the plot is meant to make us feel sorry for M, make us realize how embattled she is. And it works very well.

Except for the part where the old M, the one from the other two movies, didn’t get embattled. She wasn’t a victim ever, she was an actor in her own life. This M is a victim. Whether it’s retreating underground in the face of a threat, or spinning wildly when faced with an old enemy, or even running and hiding behind the nearest man she can find, this is not a strong woman. This is not M.

I want to zero in on that last bit for a second. Now, I thought there was a bit of cuteness in the interaction between Albert Finney and M in the Skyfall house. It was adorable to think of the two of them bonding over James’ quirks, and shooting guns together. But I hated that, even though we are informed many times that M is a great agent and rose to the top on her talent, we see her fumble her gun, become terrified, and run and hide behind Mr. Finney there, who is a civilian. Now those would all be perfectly fine things for my grandmother to do, as she has no combat training and I don’t think she’s ever even held a gun (but people can surprise you, and she is a little intimidating), but it is not the behavior you expect from the head of MI-6. 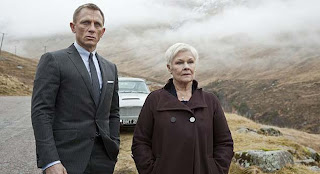 Now, again, I get the point they were trying to make with this portrayal of the character. They wanted to make it clear that M was on the verge of going down, and to show how emotional that would be. They wanted you to empathize with her, and to do that, they made her a victim.

There’s really only one reason they had to victimize M to make her more “likable”. It means that the writers didn’t have any idea how to relate to a strong woman on her own terms, and had to weaken one just to think that the audience could feel for her. M had to be blasted from all sides and look frail and old for us to sympathize with her? As if. I would like her more if she pulled a Helen Mirren from RED and just looked fabulous and kickass the whole time. Much more empathetic.

It’s a symptom of the disease. None of the women in this most recent Bond movie hit the criteria for a strong female character, because the writers clearly have no idea what that looks like. Instead of taking a character like M and making the audience respect her, they decided that instead we had to sympathize with her, and that the only way to do that was to hurt her. It shows a limited understanding of people, and a really depressing view of our culture.

In short, and I know this article is pretty short, Skyfall let me down. They had within their grasps a really great story about a really intriguing character. The idea of the spymaster being hunted down by those they’ve betrayed is a fascinating one, and a large part of why movies like Tinker Tailor Soldier Spy catch our interest. But in trying to make the audience “get” M, they made the story weaker. If she can’t defend herself, then we have no reason to believe that she was good at her job in the first place, and therefore no reason to want her to stay there. They implied that women are all emotion and fluffy thinking, said it was a bad thing, then confirmed it.

Really guys, talk about shooting yourselves in the foot.