Classic Sci-Fi Ruined My Life (Yours Too) 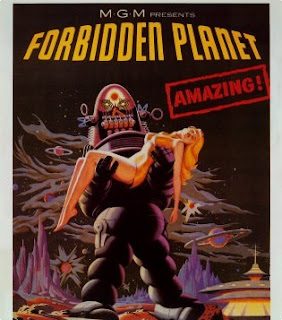 Okay. We’re starting out the normal way: blah blah, I actually like all the things that I’m complaining about, blah blah, no offense intended, blah, I really do read these books, blah. Good?


I am aware that this is a broad category, but for the purposes of this article, “classic” means “written by Ray Bradbury, Robert Heinlein, Kurt Vonnegut (sometimes), Isaac Asimov or Arthur C. Clarke. And we’re really mostly dealing with the first three here.


I have a lot of respect for these writers, because though most of them started out writing pulpy stories just for the paycheck, they all managed to convey real messages of hope and truth (or despair and truth), and showed the world the deepest social issues of the day in a way that made them seem more palatable, or at least more relatable. I love classic sci-fi. Dedicated a bookshelf to it love it.


I find myself having trouble relating to these books in any meaningful way. I mean, I love the stories, I think they bring up great questions about the meaning of our lives and the direction our society is heading, but I really hate most of the characters. Especially the women. 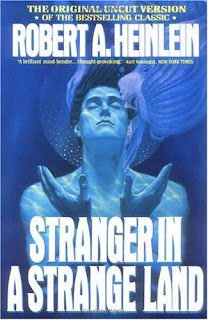 There are a couple of reasons. First, out of all of those genres just listed, classic science fiction is really the only one that’s gotten credibility in the past fifty years. We’re all pretty clear now that Vonnegut and Asimov and Heinlein were virtuosos, and appreciating their work on a scholarly level isn’t weird. There are lots of college classes that delve into them, and most consider them to be the more influential writers of this past century.


We should also consider that classic sci-fi was one of the first real composite genres. Not only did it consist of the general sci-fi elements, it also pulled in aspects of other genres. Now you could read a book that was both a western and a science fiction story! Or a film noir sci-fi tale. All these avenues were available to you now, just add lasers.


But I think the real reason why classic sci-fi had such a strong impact on how we view female characters was simpler than that. Basically, when Hollywood started getting into sci-fi, this is where they turned.


I don’t want to get all literary critical on you guys, but you can draw a direct line between the schlock science fiction serials of the early twentieth century and modern day blockbusters. The particular works in question here influenced shows like The Twilight Zone and Star Trek and movies like Blade Runner and Alien immeasurably. And then these shows and movies reinvented our idea of cinema and storytelling.


So what did they do to us? 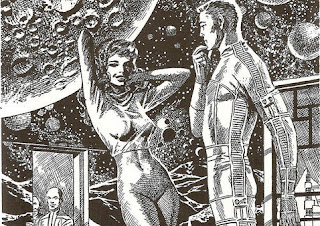 I’m going to talk here about a couple of books in particular, but we’ll start with Heinlein’s really awesome The Moon Is a Harsh Mistress. I love this book. It took me ages to get into it the first time I read it, because the whole thing is written in a made-up moon dialect, and it’s a convoluted plot about a prisoner revolt on Earth’s biggest penal colony, the Moon, and it’s freaking weird, but I love it.


Now, I’m willing to bet that Heinlein thought of himself as, maybe not a feminist, but at least a progressive. He even goes as far as, in this book, to elaborate on how much fairer and more pleasant the Moon is for women than Earth is. No one on the Moon would dare dream of raping a woman, because women are so scarce and men should respect their right to choose sexual partners. Also he wrote about group marriage and was clearly a proponent of sexual liberty. And the women had pretty decent jobs, I guess.


The thing is, none of the female characters in the book, of which there are several, actually have any impact on the story. There’s one main female character, and the most interesting thing that happens in her storyline is that she marries into the same group marriage as the main character. He desires her, and, though she’s about twenty years younger and phenomenally more attractive according to the narration, she desires him too. She falls into the happiness and casual sex that befits a Moon woman and decides to get married. 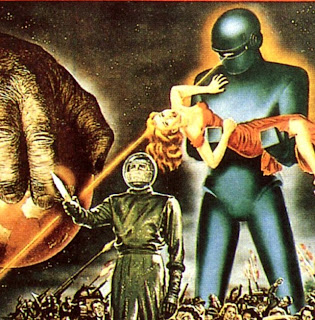 Yeah, reading that, I kind of had to wonder if Heinlein had ever actually met a woman. I mean, I guess some of her actions made sense in a logical way, but there was just so much creepiness in the way she behaved. She barely did anything, but was incredibly instrumental in the rebellion, apparently, had no real interests of her own that we could see, and was converted really quickly to a way of life that was utterly foreign to her. I just have no idea what he thinks real women are like. Or for that matter, what people are like.


Or maybe take this example, of Kurt Vonnegut’s Sirens of Titan, arguably his most obviously science fiction work. I’d explain what it’s about, but that would be another whole dissertation. Trust me.


In it, the male protagonist, who is a jerk, meets this lovely widow and insults her. She really hates him. Later, when they are both shipped off to Mars (hard to explain), he rapes her. Repeatedly. Still further on in the story, he meets their son, and then the three of them are shipped off to Titan, the moon of Saturn, where the two of them learn to tolerate each other. Oh, and there’s the bit where the entire plot of the story is propelled along by a photograph of three amazing women (the “sirens” of Titan) who are implied to be waiting to give the protagonist the best sex of his life. Turns out they were statues the whole time.


Anyway, the problem I have with this story, other than the rape apologist stuff, which seems to be a theme for Vonnegut, is that her character is never more than a tool of the story. She exists only to drive the protagonist forward, and never gets to be her own person. She’s just there to facilitate and remark upon his journey.


And that sucks. Really. 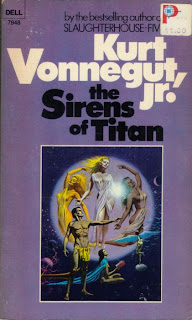 This is what I feel like got brought over from the sci-fi books and into our modern storytelling culture. The idea wasn’t new, that women are not the writers of their own stories, but when even science fiction, the fiction of our bright and shining future, was endorsing that view, then it cemented in our minds. Women are means to an end and always will be means to an end. They are not their own creatures of agency, but are just there for the sexual gratification or emotional development of men.


The problem with snuffing out this view of women is that it’s not overt. No one (well, no one decent) goes into writing a story and thinks, “Gosh, I don’t want the female character to do anything useful. I think she should only be a function of the man’s story. This isn’t about her, after all. She doesn’t have anything to say, since it’s not like women are people.” Writers usually have the best of intentions.


Which means we have to keep complaining about this as a problem. Most people don’t even see it happening, so let’s keep pointing it out. Someday we’ll finally get to the point where they listen, and on that day, I will be convinced that we’ve finally reached the future.