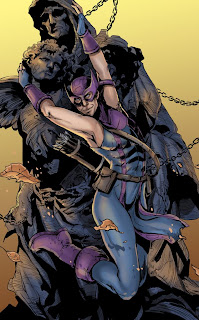 So, this isn’t the timeliest of posts, since the project to which I will be referring actually started a few months ago, and I’ve been aware of it nearly since the inception, but today I want to discuss The Hawkeye Initiative, because I think it brings up some really interesting points about our culture and how we view female characters. But first, a story!


I am not a very visual person by nature, but I do like pictures. And in every place I live, after a while, I develop a bit of a collage on my walls, comprised of cool shots I’ve collected over the years. Some are by me, some are postcards, others are from National Geographic or are souvenirs from places I’ve visited, and still others are paintings and photographs I’ve been given. But the majority, far and away, are pop culture pics ripped from the pages of a magazine.


I keep them there for a couple of reasons, but chief among them is that I really just enjoy looking at my wall and seeing all my favorite heroines scowling down at me.


Ordinarily, this is a process that takes some time, but in this case, I had the opportunity to put up most of my mural last weekend, returning from Christmas as I did with a huge pile of new pictures. And when I had it all up there on the wall, heroes scowling and memories visible, I realized something really really awkward.


There is a lot of butt on my wall right now.


Some of it is, of course, excusable. Artistic shots of Marion Cotillard from Vogue? Yeah, you can be a little racy. The new promo for Arrow? I was expecting about that many abs. But the rest of it doesn’t have a huge excuse. Like the Entertainment Weekly cover that had Nick Fury and Scarlett Johansson on it. He’s just standing there, but she’s contorting her back so that you can see the curve of her butt, and the swell of her breast in the same pose. It looks really uncomfortable.

And of course that’s not it. A shot of Buffy where she’s mostly turned away from the camera, looking back over her shoulder. Wonder why. Or a great new pic of Walking Dead’s Michonne, where she’s twisted herself so her chest sticks out. Or just a few pictures with strategically folded arms or inexplicable squatting.


The point is, it’s everywhere. It’s like background radiation, the idea that no matter how cool a female hero is, she will always be judged by her attractiveness to a male audience.


Which is where The Hawkeye Initiative comes in.


As much as this irritating standard might be true in live action, it’s doubly true in comics, where the perceived audience is always male (even though women account for roughly half of all comics sales, as they do in videogames as well). The writers and artists, knowingly or not, pander to a stereotyped horny male audience that presumably wants to see as much T & A as it can in any given issue of Batman. So we get female characters who might be interesting and unique in their own rights, but are always dressed like strippers, and always posing like they’re getting ready for a Hustler shoot. And not a very classy one.


The Hawkeye Initiative decided to tackle this head on, with a simple idea. Replace any comic book heroine in a ridiculous pose and outfit, with Hawkeye in the same pose and outfit. Obviously, the results look ridiculous. 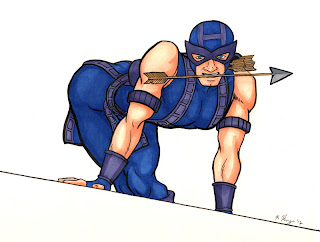 But wait, you might say, don’t women feel powerful when they look sexy? By that logic, they’re both power fantasies!


Eh, sure, some women feel powerful when scantily clad, but I would argue that no woman feels powerful when trying to run in heels. And then falling and getting a broken ankle.

Besides which, most of the poses in these comics reflect less of a sexual enlightenment and confidence, and more of a broken spine and inexplicably bad understanding of sex appeal and human anatomy.


Which all comes back around to the issue at hand. Namely, we are too obsessed with the sexual attractiveness of our female heroes. Sure, I like looking at pretty people, but I resent the idea that a female character is only of value if she adheres to a narrow idea of feminine beauty, and that it doesn’t matter how cool she actually is.


So have some pictures of Hawkeye dressed up like a female superhero. It’s going to be a long road. 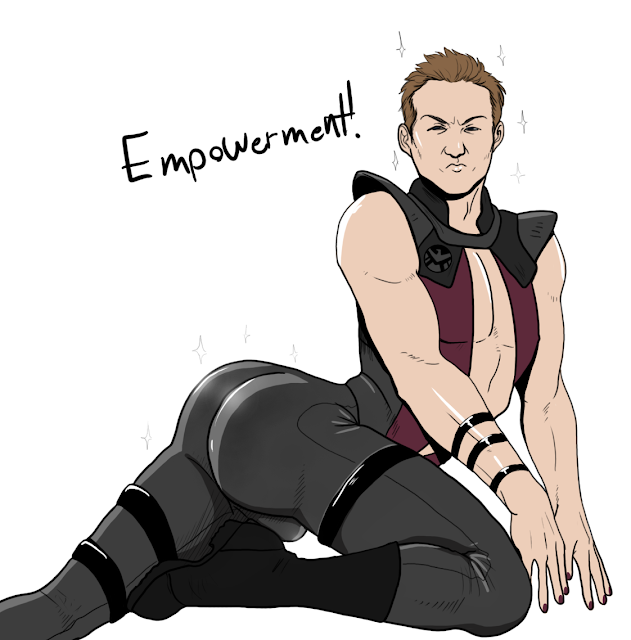