Why Are We So Convinced Breastfeeding is Obscene?

Okay, massive disclaimer here. If you are reading this article at work, on the subway, or generally anywhere that someone might look over your shoulder and be a bit miffed by an interesting topic, you should probably stop now and resume reading once you’re in the comfort of your own home.

Are they gone? Good. Let’s get started.

A couple of recent controversies have brought to light a very interesting double standard in our culture. Namely, that we find breastfeeding to be an objectionable action and scandalous or even perverse to do and be seen doing in public, but we don’t have nearly the same problem with bared breasts in general. And this is a bit weird.

The scandals I’m referring to here are actually pretty numerous. First, there’s the scandal around that Time Magazine cover, you know, the one with the kid and his mom and the strategically placed chair. People were utterly scandalized by the cover, which shows a mother breastfeeding her toddler son. It was obscene, you heard some people say, while other, more sensible people were merely offended by the article’s title, “Are You Mom Enough”, which is just dumb.

Then there’s the way that Facebook has adopted a policy of yanking any and all pictures of breastfeeding, citing them as pornographic works. It does not, however, automatically take down images of young girls with their hands covering their nipples, which seems a bit odd since those actually are intended as pornographic works.

Let’s not leave popular culture out of this either! Game of Thrones featured an entire scene about the ickiness of attachment parenting gone wrong, which was intended to squick the audience, and did it so well that it spawned a real life controversy about the actors involved. Or we could talk about the recent issues with the cover of Saga Issue 1, which features breastfeeding (and interspecies marriage).

Why are we so uptight about this? What is it about breastfeeding that makes us all phenomenally flip our wigs?

I have a few theories.

First of all, images of breastfeeding are an intersection of the sexual and biological functions of the female breast. While we all (hopefully) know that breasts are designed to be used for the nurture of the young of our species, hence the mammary gland and the term mammal being inexplicably related, as a culture we value breasts as sexual features first and foremost. They are the secondary sexual characteristics so fetishized that it’s hard to watch anything on television or in any commercial without some reference to them.

We like boobs, apparently. So much so that any image of a breast is deemed pornographic and sexual. You hear a lot of stories about young boys seeing their first images of breasts in National Geographic magazines and being mystified by them. Or of people discovering Greek and Roman statuary and being transfixed by all the titties.

Because as a culture we have fetishized the female breast, we find it very uncomfortable to see images of them in any situation. Our fetishization of breasts causes us to stigmatize them. If breasts are out, then clearly it is a sexual situation. Breasts are only sexual and cannot be neutral.

This is, of course, patently untrue. Breasts are neutral, as is any human characteristic when removed from a sexual situation. Penises are for peeing much more than they are for sex. Vaginas may be a sexual orifice, but they also connect to the urethra, and about a quarter of the time they aren’t very fun anyways, trust me. Breasts happen to be where the milk comes from for babies. While it is a product of sex, it’s not sex itself. Sorry. 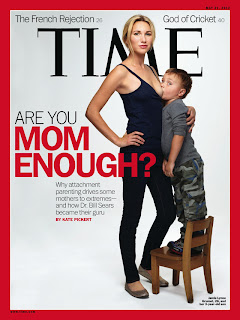 It’s just, when we spend all that time and energy obsessing over and lusting after and being shocked by breasts sexually, it’s incredibly hard to stop seeing them as demon bazongas, and start seeing them for what they are in this case, a really squashy vending machine. The fact that some people have turned lactation into a kink of its own really doesn’t help here.

But here’s what really chafes my butt. The people complaining about the obscenity of breastfeeding are the same ones arguing about the oversexualization of our culture. They fail to realize that by insisting on sexualizing a non-sexual act, they are the creators of this hyper-sexual culture. By seeing breasts and dirty and wrong when they’re feeding babies, they create a culture where no breast is ever right.

The important thing in the breastfeeding debate is that people seem to have forgotten the importance of context. A breast exposed during sex is intended to have a different reaction than a breast revealed in feeding. The intended response and the situation in which the baring occurs are what should determine our reaction to it.

Now, I’m not saying that women should be stripping down all over the place willy nilly here. It’s winter and that would be cold. 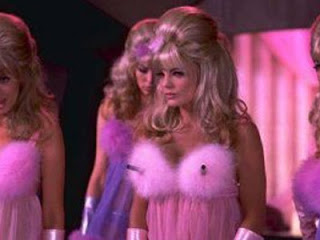 Of course, I did say that there would be multiple theories, so here are a few more:

All women are actually fem-bots from Austin Powers and their breasts conceal tiny guns.

Seeing an uncovered breast will make you go blind. Incidentally, all women are blind.

Breasts know kung fu. They’re waiting for you to look at them so they can throw the baby aside and judo chop you into next week.

Everyone is secretly a twelve year-old boy, and breasts are terrifying.

But really guys, when it comes down to it, boobs aren’t that scary. They aren’t that sexual either. What they are is just a part of the human body to which we have assigned cultural significance. We decided that all breasts are sexual. And we’re wrong.