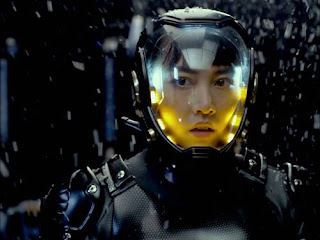 Okay, you know what? Screw it. I’ve already written a blog post about Pacific Rim (a long one too), but my love for this movie has reached such critical heights already that we’ve got to go back over this again because I don’t think that review sufficiently managed to get across the point. And what is that point?

Pacific Rim is straight up in your face awesome and if you don’t watch it on the big screen you will be very sad with yourself. Very sad indeed.

The basic premise of the film is simple and seems really predictable as far as monster disaster movies go. A hole opens up in the middle of the Pacific Ocean and from it come giant city-crushing monsters. The human race responds, not by hiding, but by building giant robots (robots so big they need two pilots) to fight the monsters.

Fast forward twelve years and the monsters have kept getting bigger, and the numbers of robots able to fight, and pilots able to lead them, keep getting smaller. The governments of the world want to bury their heads and build a wall to keep the monsters out, but the scientists know that this won’t work. That we’re looking at an extinction level event.

This is where the movie starts.

We’re brought to the edge of the ocean, the last functioning Jaeger base (that’s what they call the robots), where only four Jaeger teams remain. These four Jaegers are all that stands between Earth and the apocalypse, and they have a crazy suicidal plan on how to save the world. 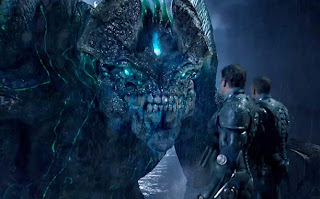 And holy crap is it awesome. I mean, giant monster fights, visuals like you’ve never seen, amazing action, amazing acting, ugh it is so incredibly good.

But what actually really made me love this movie was something a lot smaller than the fight scenes (which were epic). It was the very basic relationships at the core of the movie. And how they really weren’t what I expected.

There are three major characters in the film, and each of them seems to fit a really specific role. There’s Raleigh Becket (played by Sons of Anarchy’s Charlie Hunnam), who looks like he’s aiming right for the role of hotshot, unpredictable robot jockey. There’s Marshall Stacker Pentecost (played by Luther’s Idris Elba), who seems to be the gruff but loveable commanding officer who will give inspirational speeches and care for Raleigh like he’s his son, etc. And then there’s Mako Mori (played by Babel’s Rinko Kikuchi), who seems on track to be the naïve, sweet, lovable love interest who becomes a pilot out of cute girlish spunk, but has to be saved from the big bad monsters.

And, well, only some of that is true in this film. The reality of the story is actually much more complex. Raleigh isn’t a hotshot, he’s a has been. He was a Jaeger pilot, working with his brother, until his brother was killed and their Jaeger crashed. At the start of the story, he’s a drifter who has to get pulled back in. And Marshall Pentecost isn’t a gruff hardass, not really. He’s gruff, sure, but he’s actually really pragmatic and has a simple view of the world. It’s his and he wants to protect it. His deep relationship in the film isn’t with Raleigh, it’s with Mako. 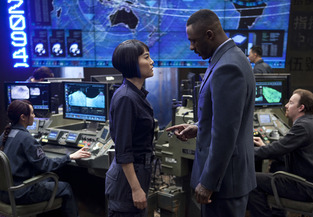 Mako – Mako’s just totally different from what I expected. She’s an enigma for a solid chunk of the plot, which is really okay. What we do know about her is that she really really wants to be a Jaeger pilot, that she’s basically fearless, and that she knows she is incredibly good at her job. There’s this brilliant scene where she and Raleigh have a moment, and you expect it to go all mushy, because she’s been eyeing him (who wouldn’t?) all day. But instead of a moment, what we get is so much better.

We get actual characters. Okay, what happens is this: Raleigh, having just come out of retirement for the final showdown asks Mako what she thinks of his fighting style. They’ve been talking about the different Jaeger fighting styles, so it’s perfectly reasonable in context. You’re braced for her to say something nice, when she actually opens up two barrels of whoopass on him and tells him that she thinks he’s a bad pilot, that he’s unpredictable, and that he could be doing a much better job.

And then she proves it. I don’t want to go too much into detail on this, but Mako was by far the biggest surprise in the film, and the best one. She doesn’t go the usual female route of not being a suitable Jaeger pilot because she’s too weak or not skilled or too frail. No, Marshall Pentecost won’t put her in a Jaeger because she’s obsessed with revenge. She’s too angry. That’s unusual. And kinda awesome. 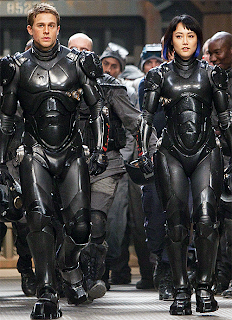 The relationship between Raleigh and Mako is the second best surprise in the movie. You expect that after she tells him off he won’t want to work with her, but it’s the opposite. He quickly realizes that they’re compatible (Jaeger pilots have to be carefully chosen, since their minds are neutrally linked when piloting the robots), and fights desperately to have her as his co-pilot. Like, there’s no showboating. He doesn’t go, “Oh no, she’s a girl. Guess it’s okay that Marshall says no.” He fights, tooth and nail, to get her as a pilot because she’s that good.

Now, there are a lot of other things in this movie that make it worth seeing. It’s a great story, it isn’t burdened by the usual frustrations of an origin story or unnecessary padding. Everything in the film has to be there, which is refreshing to see. The characters are compelling and well-rounded. The cast is multi-racial and multi-national, making this a truly global story. And the moral is beautiful: that at the end of our hope, we are still human and we are worth fighting for. Not for nations or individuals, but for all of humanity.


Man I love this movie. 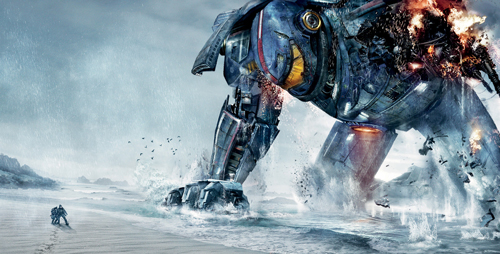