If You Know Who You Are, You Know Everything (Vikings) 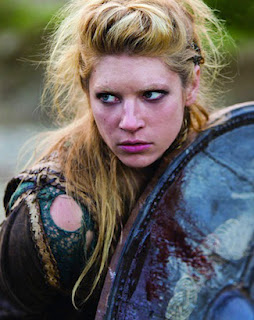 It seems a sign of the times that the History Channel has finally decided to drop their educational pretense, and now shows scripted dramas ostensibly about historical events. Fortunately for us, these dramas are actually pretty freaking good.

I haven’t seen their show on The Bible, because it seemed to toe a line I’m very interested in not crossing, but I did manage to catch Vikings, largely because it was a thing I’d never heard of and then it was all over tumblr and I can’t stand not knowing things.

So I tuned in, and much to my surprise, it’s a really compelling show. It also has one of my all time favorite female characters. But we’ll get to her in a sec.

Vikings is about, you guessed it, the Vikings. Specifically, it’s about one particular group of Vikings who were the first recorded Norse raiders to reach England. Prior to this, all historical evidence shows the Vikings going east, towards Russia, whereas in years after this event they would eventually sail as far as the Canadian coast. Which is pretty freaking cool.

The story focuses around a couple of historical figures. Literally, a couple, as in husband and wife. Ragnar and Lagertha Lodbrok (played by Travis Fimmel and Kathryn Winnick) are actually reasonably well known as far as long-dead blond people go, and are credited with discovering a way to navigate across open water, as well as being the scourges of Britain and France.

The show starts off before all this, though. Right before. When Ragnar is just a common raider and farmer with dreams of grandeur, and Lagertha is his wife, a shieldmaiden, but primarily a wife and mother to their two children, Gyda and Bjorn. (For the record, I greatly appreciated that this show didn’t skimp on giving everyone authentic tongue-twisting Norse names). 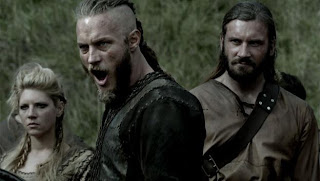 Ragnar is positive that not only is there raidable land to the west, but that he can get there, so he defies their local Earl, Earl Haraldson (Gabriel Byrne), and builds a boat to take him there. Along for the ride are Floki, the crazy boatbuilder who is a little bit too much like his namesake, and Ragnar’s brother Rollo.

Rollo actually remains one of the most interesting characters in the show due to his intense unpredictability. While it’s clear from the very beginning that he’s not a nice person, you aren’t sure what he’s going to do about it. He hates his brother, but he wants to keep Ragnar safe. He resents Ragnar’s life, but then he saves it. Honestly, the mystery is very compelling.

Anyway, Ragnar and company sail off and, what do you know, they do find land. Specifically, they find an island monastery off the coast of England. Baffled by this land of men in dresses who don’t carry weapons, and rooms full of gold clear for the taking, the Vikings have a blast and burn the place to the ground.

Some of the monks are taken as slaves, to be sold at auction, and that’s where we meet our third main character (the first two being Lagertha and Ragnar). Athelstan (George Blagden) is a devout monk who was raised by monks and has no practical knowledge of life outside their order. He eventually becomes Lagertha and Ragnar’s personal slave, then their servant, and eventually assimilates into their family. It’s quite touching to watch. 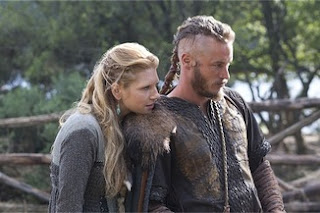 I bet you saw that coming.

It’s true. Lagertha holds a very interesting place in the story because she holds a very interesting place in society. As Ragnar’s wife, she is expected to take care of the child-raising and farm work, but as a shieldmaiden, her duty is to go out into battle and protect the soldiers as well as fight on her own. Shieldmaiden’s used their shields as both a defensive and an offensive weapon, and we see Lagertha’s skill. We also see how much she loves to fight, and how good she is at protecting Ragnar.

But what really makes Lagertha compelling is this: she doesn’t take crap from anyone. Seriously. Anyone. Not once in the series. But she has another quality that makes her more than just a ticking time bomb. She knows when to hold her tongue too. And she does all of this because she knows, better than anyone else on this show, exactly who she is.

So when her husband’s brother is a creepy weirdo obsessed with her, Lagertha doesn’t bring it up or worry her husband with it, she bides her time. She knows that their relationship will eventually fracture, and that she doesn’t want to be the one to push it over the edge. But once it’s gone over, she’ll be the one doing a coup de grace on the corpse.

Sorry, that was graphic. But this is a blog post about Vikings. 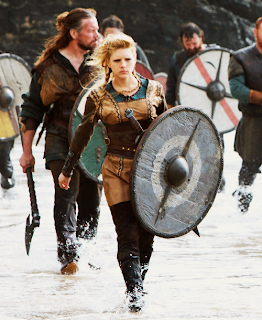 When Ragnar insists that Lagertha can’t come on the summer raids because he’s worried their children aren’t strong enough to protect the farm, Lagertha fights him. Literally. And, entertainingly enough, we see that she wins. Her help is instrumental in the winning of the next battle, but her actions also bring trouble down on her family. She is not an uncomplicated figure, but she is freaking awesome.

She isn’t in the slightest bit insecure, because, again, she knows exactly who she is. And she likes it.

But maybe my favorite Lagertha scene is this: She’s pregnant. Really pregnant. Can’t sit up straight in a chair pregnant. And she’s listening to petitions at court. A man comes up with his pregnant wife (or maybe she has the baby, it doesn’t matter). The man accuses his wife of adultery, because he can’t have kids. The wife looks miserable. She’s probably abused. She’s tired, she’s afraid for her life. The man is asking to have her killed.

Lagertha takes one look at the situation and does the absolute best, most insane thing she could do. She tells the man to count his lucky stars that his wife had sex with a god, and that as the child of a god, his son would be watched carefully by the Earl’s house, to make sure he and his mother were treated well. Because we can’t anger the gods now, can we? 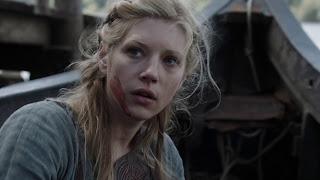 She delivers this verdict, stone cold, while heavily pregnant herself, and you just have to stop and marvel. Because no one argues. No one says a peep. And the man has to walk out of the court and do what she says. The wife is in tears of gratitude, and Lagertha? She just smiles. Because she knows exactly who she is, and she doesn’t give a crap whether you like it or not.

There are other interesting characters on the show, like Siggy, Earl Haraldson’s clever, conniving wife, played excellently by Jessalyn Gilsig, or Helga, Floki’s consort who is freaky and weird and really interesting for all we don’t know much about her. Athelstan gets points for being the character with the steepest arc. But really the prize has to go to Lagertha. There’s just something about her, how sure she is all the time, that draws you in.

Well, that and her fabulous hair.