Johnny Depp Is White and the Script Is Bad (Lone Ranger) You know when you see a movie and you know you were there, and you’re pretty sure you can remember some of the scenes, but you can’t for the life of you remember what it was about? Just that you didn't like it?

In other news, I saw Lone Ranger yesterday.

A film that was supposed to start a series but seems to be dead on arrival, Lone Ranger cost $250 million or so, and opened to $49 million or so, and bad reviews. Ouch. It’s a bit of a blow for Disney, which had the same problem last year with John Carter (which I actually enjoyed the heck out of).

If you didn’t catch the reference, or you weren’t alive in the fifties, Lone Ranger is based on the TV show of the same name. Now, the TV show is pretty iconic. I’m definitely out of the demographic that saw it airing, but I’ve seen a couple episodes in reruns on very late at night, and the show was cute, if a bit racist, and very blissfully simplistic. It featured a white guy, The Lone Ranger, who was doing good and saving people in the Old West. His sidekick, the incredibly stereotypical Tonto, and he rode around being outlaws for some reason I didn’t understand, and enforcing the law, which I also didn’t understand.

But hey, he’s The Lone Ranger, his horse is named Silver, and his theme song is Wagner’s “Ride of the Valkyries”. What’s not to like? 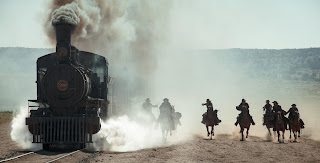 Okay, now fast forward to 2013. Does this sound like a story people were absolutely dying to see remade? No. It’s about as culturally relevant as trying to remake Gilligan’s Island. I mean, I guess it could have been good if they’d gone schlocky with it. Just hardcore dug into the cheesiness and lived there. Or if they’d decided to class up the joint and made it all gritty and realistic and stuff.

Unfortunately, like Tim Burton’s last offering, this movie did neither. It wasn’t silly enough, but neither was it realistic enough. Instead what you got was a movie that switched tone all the freaking time. One scene you’ve got a horse comically wearing a hat and climbing a tree. The next one you’re talking about the genocide perpetrated against the Comanche by the American government. Then Johnny Depp says something witty/racist. Then the movie makes a pertinent point about the railroad industry.

It kind of drove me nuts, if you couldn’t tell.

In honor of giving the film a fair shake, though, here’s the skinny.

It follows John Reed, a lawyer on his way back from school, who hails from the Texas Territories. It’s taking place in 1869, just as things are heating up between the Native Americans and the US military, and John is going back to his hometown in order to uphold law and order as the city prosecutor.

But, when he gets there, his brother Dan, who’s a Texas Ranger, takes John along on a posse ride to recapture this really bad outlaw. The posse gets ambushed, everyone dies, except for John, who takes this slight to heart and becomes the Lone Ranger, with the help of Tonto, who is also hunting the outlaw, and together they take revenge. 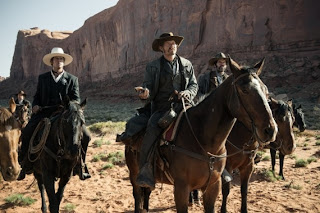 That was pretty much what happened. Only it took two and a half hours. Seriously. That movie was as long as The Dark Knight. Ugh.

The reason it was so long, and not the pleasantly cheesy action pic I was hoping for is that the movie stopped along the way for something stupid. It stopped to make a point. Hypothetically it was making a point about the atrocities committed against the Native Americans in the white lust for power and money, but that mostly got lost in some seriously bad writing.

Not to mention that the whole thing was kinda racist.

The complicated story was this (SPOILERS): A young Tonto once saved some white men and brought them back to his village. Once healed, the white men saw some silver, and a naïve Tonto took them up the river to where the silver came from because why not? Then the evil white men killed all the nice Indians, and Tonto went nuts with grief and spent the next twenty years hunting them down.

The white men bought a railroad, and one of them became an outlaw, because of reasons I guess, and the other one went into business, which totally seems legit. They conspired to start a war between the Comanche and the US military so that they could break a Comanche land treaty and build a railroad across the Comanche land in order to get a railroad to the silver so that they could haul it out. And then Tonto and The Lone Ranger stop them. 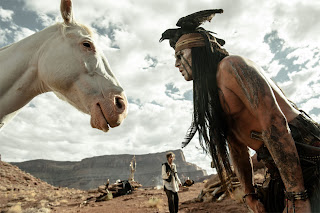 So, not only was the story incredibly overly complex and weird and badly written, it was also just completely unnecessary. And racist. Did I mention that it was racist? Because it was racist.

Despite being told primarily from the perspective of a Native American (Tonto), and definitely being the sort of movie that really really didn’t want to be racist, it was still super racist? How did that happen? Let me tell you thing.

If you want a story to be inclusive, to have characters of color, and to, you know, not be racist, it’s usually a good step to actually talk to some people of the race you hope to portray before you start writing. Maybe run a few ideas past them. That’s a good start.

Then you might consider actually casting a person of that race to play the race you intend to portray. Like maybe not Johnny Depp. Like maybe casting an actually Native American actor. Or even just one who isn’t super white. That would be good.

And then, of course, you probably want to avoid negative stereotypes, like portraying a people or character as lazy, shiftless, and lying. You could do this by not having the character in question narrate the movie as a series of seeming lies, or having the character not constantly steal things. Or even (gasp!) make the character the agent of his own story and not completely beholden to a white guy.

Finally, you should probably avoid using “positive” stereotypes too. It might be a good idea to steer clear of portraying all the Native Americans in your movie as noble savages who lived in peace and harmony until the evil white man came. It may seem like you’re ennobling the characters, but what you’re really doing is making them less human.

Humans have faults and flaws. Humans kinda suck sometimes. But humans also have agency and the ability to make their own choices. When you portray someone as an “innocent” who really had no choice to do evil and only had evil thrust upon them, you make them an inhuman victim, which is, you know, racist. 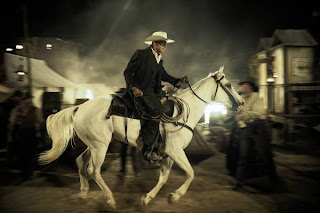 I don’t think Tim Burton is out there burning crosses on anyone’s yard, but I do think that he made a really grave miscalculation in this movie. By combining some things that really ought not to be mixed, alongside the just general badness of the movie, he made something worse than a summer flop. He made an offensive summer flop.

For me, the worst scene was right at the end. I’ve sat through two and a half hours of Johnny Depp mugging for the camera and doing his best “me no talk good” impression, Armie Hammer being blandly attractive, and Ruth Wilson not getting nearly enough screentime, when what I think is the final battle (it isn’t) starts. It’s US cavalrymen against a whole tribe of Comanche. John Reed has to be rescued. Tonto is being ridiculous. Rinse and repeat.

But there was this one part, where the Comanche have just been gunned down by a machine gun. Where the Cavalrymen are looking around at the waste of bodies around them, and suddenly we cut to Tonto making a joke. And I wanted to throw up.

Because that really happened. We really slaughtered millions of people. Our country really did break treaties left and right in the name of progress. But we didn’t do it because we’re misguided white people. We did it because we’re human and we’re dumb. And they fought back because they’re human and dumb. Nobody was noble, nobody was completely innocent, we were all just people, and it all sucked.

And frankly, I don’t want to see a movie where that gets cheapened in the name of a summer franchise and popcorn sales. I really don’t.