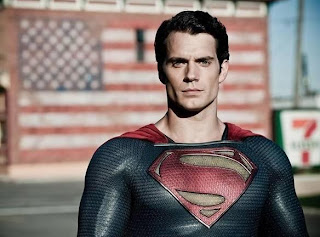 I don’t really like Superman. There. I said it. Now you all know my dark deep secret.

Anyway. Superman is boring. He’s got approximately all of the powers, a tragic backstory that he doesn’t really remember because how would he, he was a baby, and the chiseled jaw of a supermodel. If he were any more perfect I’d hurl.

So believe me that when I say that I actually enjoyed Man of Steel, I am just as surprised as you are. Even more so when I realize that not that many other people (people like me, cranky critical people) did. And I think I have some idea why.

But, as always, explanations first!

In case you’re still under that magically wifi getting rock, Man of Steel is the latest Superman movie to come out of Warner Brothers, and a pretty blatant attempt to wash the taste of Superman Returns out of our mouths before the Justice League movie gears up in a few years. It got okay ratings and did quite well in the box office, so I’m pretty sure it’s considered a success all around. 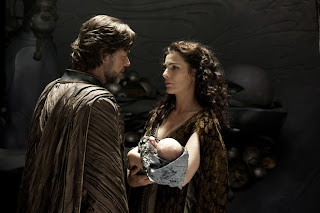 The story is comic-book dense, as per usual with DC Comics. Jor-El, Superman’s father, here played by Russell Crowe in atonement for Les Mis, is the head scientist on Krypton and knows that his planet is going to die because blah blah core mining blah blatant fossil fuels analysis blabity blah blah. He and Lara (Ayelet Zurer) have had a secret baby because Krypton prefers its babies to be genetically engineered for roles in their society. That baby is, of course, Superman. Or, as they call him, Kal.

Meanwhile, General Zod (Michael Shannon, in his best overacting state) has staged a governmental coup and is chasing down Jor-El because Jor-El stole the codex that does things with stuff.

Okay, this is where the movie started to buckle under the weight of its own mythology. About fifteen minutes in. Before we even got to Earth. Oof.

Long story not even remotely short, Zod gets captured and Kal gets sent to Earth. Krypton goes boom, and everyone dies, except for Zod and his gang of nasties, who escaped in their space prison. They then decided to hunt down Jor-El’s son, who had the codex with him, because they really really needed the codex. For stuff.

Cut to Earth, where Kal-El has grown up into the incredibly attractive Henry Cavill, er, Clark Kent, a drifter with a heart of gold. This is where the movie actually started to get me involved. Sure, the stuff on Krypton was engaging, if dense, but the moments we spent with a Clark Kent trying to figure out his place in the world while not letting said world know he exists? Those were great. 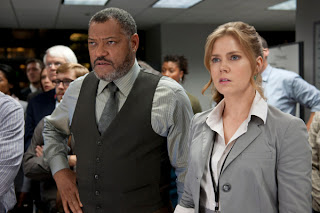 Diane Lane and Kevin Costner do a solid job as Clark’s parents, though there is a moment of weirdness when Jonathan Kent seems to be suggesting that Clark should have let a bunch of kids drown to keep his identity safe.

Eventually Clark meets Lois Lane, played admirably by the always awesome Amy Adams, and starts her on a “the truth is out there” hunt for aliens. Which is a nice spin.

Okay, we’re not going to go blow by blow through the story here. But you get the idea. Super dense backstory, really intriguing story on Earth, and then what happens?

Zod happens. He gets all destructive and the second act starts to fall apart, and all of a sudden you’re sitting in a bombed out shell of Metropolis wondering how the hell the national economy is supposed to recover from this. Let alone the people.

Because of the subtext.

Look, I have a lot of problems with the second half of the film, where Zod gets all terra-forming happy without any actual reason, but the one thing I really do approve of is the subtextual debate going on. It happens a little bit on screen, but the bulk of it has to go on in your head. And that’s okay.

It’s a debate about eugenics. 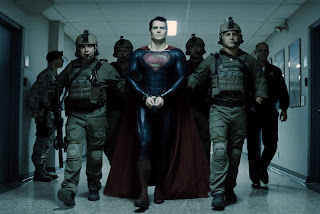 You see, on Krypton every baby was designed for a specific role in society even before they were conceived. The kids were carried to term in weird egg sacks and then farmed out to be raised in their specific skill sets. Zod himself points this out: “I was raised to protect Krypton. I have no other purpose.” Or something like that.

Clark/Kal, on the other hand, wasn’t designed for anything. He was born because his parents had unprotected sex and then a baby popped out some amount of months later. He’s all natural, and as such, he has a choice.

The reason Zod wants the codex, the whole thing driving the plot that it takes several viewings to understand, is because the codex contains all that genetic information so that someone can create a fully functioning Kryptonian society from scratch. That’s what Zod wants to do.

But in so doing, he will be creating a society just like the last, where he gets to pick and choose which bloodlines to keep and which to throw out, what is “good” about certain genes, and what purposes the New Kryptonians should be programmed to have. In short, Zod wants to be a eugenics god.

And Clark/Kal is against that. For pretty obvious reasons. Setting aside the moral implications for a second, if Zod is to succeed, then Kal will immediately become obsolete, like Ethan Hawke in Gattaca. Or maybe he’ll still have an advantage over them all because he has his free will. But he’d be a lonely god, stuck up there with his moral choice while everyone else just happily goes about their way. 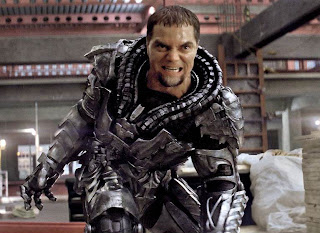 This isn’t even to mention the whole subtextual angst going on in the movie: Zod himself has no free will. If we accept that the Kryptonian citizens who were designed solely for a purpose must serve that purpose no matter what, then Zod has no choice in his actions. He does what he does because he is absolutely incapable of not doing that. He must protect Krypton. If Krypton falls he must rebuild Krypton exactly the same way as it was so that he can protect it. He literally can’t do anything else.

Which makes it a little weird to think about that fight scene now.

For all that I’m in favor of saving the world and not getting turned into a mountain of skulls on which aliens can repopulate (and I’m very in favor of that not happening), there’s something inherently tragic in that last fight. Kal, as much as he fights for moral reasons, is also doing it for personal ones. And Zod, well he’s fighting because he has to. Because he can’t not fight.

In the end, when Kal kills Zod, he’s less killing a sentient being than he is putting down a rabid dog. Or, better analogy, deleting a faulty computer program.

Except here’s the thing. Zod wasn’t faulty. He did exactly what he was programmed to do. So who do we blame? Do we blame Zod or do we blame the corrupt society that programmed him this way in the first place? Oh wait, they’re all already dead.

I like the subtextual moral debate in Man of Steel not just because it wrinkles my brain, but also because it adds a lot of much needed color to the second half. When you realize that these two characters are fighting because they have absolutely no other choice, and that there is no point at which they could have avoided this fate, it becomes so epically tragic and so incredibly engrossing.

It’s a shame the movie didn’t realize this and then capitalize on it. Or, you know, write a better second half. But knowing it’s there really does massively improve the film, and I, for one, am a huge fan of seeing complex moral debates up there on the screen with the spandex.

Oh, and happy fourth of July and all that stuff. Right.