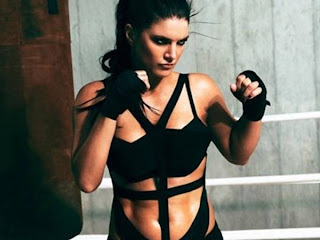 If you're like me, then you've not really heard anything about Avengelyne the comic or the character aside from her having been created by Rob Liefeld. Well, it seems that Avengelyne is getting a live action movie, starring Gina Carano.

On the one hand, yay! Gina Carano, while admittedly not the world's best actress, as we saw in Haywire and Fast and Furious 6, is a fantastic action star who genuinely has the fighting skills to look realistic and cool. On the other, I really dislike Rob Liefeld and I'm not thrilled about what his idea of a strong female character.

The character is a fallen angel who fights demons and the forces of darkness, and Carano is reportedly helping Liefeld to revamp the character, so who knows. Maybe it'll be awesome.

Because let's be real, I'm going to see this movie whether or not it's good. Gina Carano.