NEWS: Karen Gillan to Play Nebula in Guardians of the Galaxy 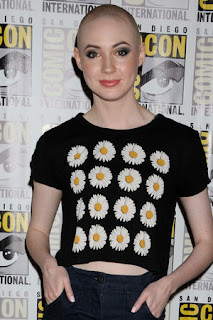 If you haven't heard the news, Karen Gillan (Doctor Who's Amy Pond) is going to be playing an integral role in the upcoming Guardian's of the Galaxy movie. We've known for a bit that's it's possible she would be playing the film's supervillain, Nebula, it wasn't confirmed. Well, now it is! And, on top of that, it looks like Gillan isn't wussing out on Nebula's signature bald head either. Which is pretty rad.

Nebula in and of herself is a really fantastic character, and signifies exciting things for the upcoming Marvel films: she's integrally involved in the "Infinity Gauntlet" storyline, and appears as a villain who can actually defeat Thanos himself. Her reveal leads to some very interesting questions about Guardian's of the Galaxy and Avengers 3.

But, whatever happens, let's just celebrate a fantastic actress in a fantastic role with a fantastic hairdo.
Posted by Unknown at 1:34 PM