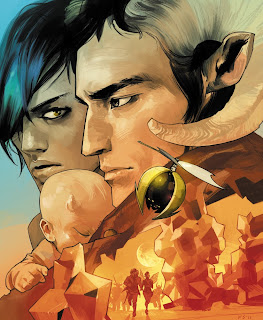 This pleases us because Saga is absolutely fabulous, and it's just nice to see excellence rewarded. So congratulations to Fiona Staples and Brian K. Vaughn!

Brian K. Vaughn previously made a splash with his series Y: The Last Man, and Fiona Staples' art graced Mystery Society and Jonah Hex. The first cover of Saga made a slight controversy when it came out, due to the whole breast-feeding thing.

Anyway, we're very happy for them both, and look forward to many more issues of Saga to come, as well as the inevitable HBO deal, because let's be serious, this is the best show not yet on television.
Posted by Unknown at 6:02 PM