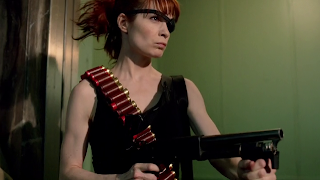 A little over a year ago I wrote an article for this blog where I complained about Dean Winchester’s (of Supernatural) bad habit of thinking of every woman he meets as either a Madonna or a Whore. Except for one. Except for Charlie.

If you’re just a casual fan of Supernatural, or not a fan at all, you might not remember Charlie. And that’s okay. She’s only been in three episodes, though they were three of the most entertaining ones in recent years. Played by Felicia Day, Charlie’s character is intriguing, funny, weird, and a complete and total nerd.

This is pretty significant for Dean. If you’re not up on the character, or you just don’t feel like going back and reading my magnificent work where I explained his various flaws, here’s the skinny: Dean Winchester has problems with women. Probably because his mother (who he idolized) died burning to death on the ceiling of his brother’s nursery. May have given him a few issues. 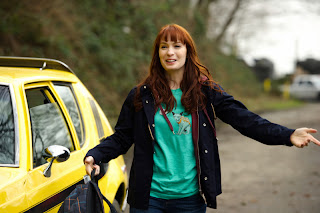 As a result, he sees women in two categories: people who remind him of his mother, and bad girls he can have sex with. Seriously, that’s it. Completely it. Until Charlie.

Charlie was originally intended to be a one-off character, a funny guest star they bring in to help fight the Leviathan in season seven and give Felicia Day a cameo in the show. She is geek royalty after all. Instead, though, the fans really loved her, and Charlie became a recurring character. Which is great for us, because she’s super fun to watch, but even better for Dean, because all of a sudden, he has to deal with a woman in his life, and it’s one he can’t sleep with.

Why? Well, Charlie’s a lesbian for starters, but more than that she’s really not Dean’s type at all. Not only is she not even a little bit maternal, she’s a huge nerd, which isn’t Dean’s thing (well, not his thing in a way that he’ll admit to anyway), and she’s just not his type. He likes bendy, busty bad girls who can cook and maybe want to have his babies. Charlie, on the other hand, wants to dress him up in armor and parade him around her LARP weekend as her “handmaiden”. True story.

Charlie’s storyline is pretty awesome in and of itself, actually, and not just where she comes into contact with the boys. (Some SPOILERS for season eight here, guys, but no more than you’d get from tumblr). 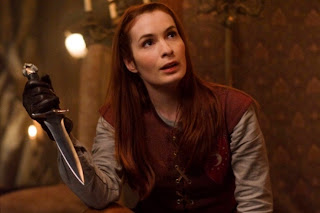 When we meet Charlie she’s just this cool nerdy girl that they convince to help them find stuff on the Leviathan’s evil master plan because she’s been snooping around their stuff. She performs amazingly under pressure, though she does break her arm, I think, and she gets a little interested in the whole hunting thing. Not enough to do it, though. Just enough to wonder and then get on a bus to change her identity and hopefully not get eaten by a terrifying purgatory monster (the Leviathan, they’re scary).

We run into her again in the eighth season when she just so happens to be back in the realm of the oogie boogie. She’s made a new life for herself and has risen to the title of “Queen of Moondor”, because apparently making a new life for yourself involves a whole hell of a lot of LARPing. Which I really see no problem with.

Sam and Dean get called in when people in her LARPing tournament turn up dead (really dead), and this is where the characterization kicks in. As Dean goes around with her trying to investigate the tournament from the inside, we see them bond. We see, gasp, Dean actually come to enjoy a woman for more than her body! What the hell?!

We even see them bro out a few times, and we definitely see Dean get pretty into this whole LARPing thing.

But we also see that Charlie’s lonely. She knows the truth about the world now, and it’s hard to keep that a secret, while also running. Because for some reason, Charlie’s still running. The Leviathan are gone, she could go back to her original identity and maybe even get her old job back (debatable, since the company was owned by the Leviathan, but it might have survived – it was publicly traded). Except she doesn’t want to.

We don’t find out why until the next time Charlie shows up. 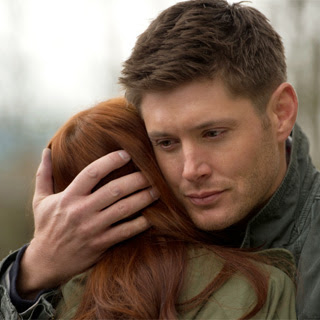 This time, Charlie finds the boys because she has a case for them. She claims to just be keeping her ear to the ground, but they immediately suspect something is wrong. And they’re right. Charlie was in the area because she was checking on her mom. Her mom who is in a coma. And it turns out that Charlie’s been hiding her identity for a very long time – since she was twelve. Not only that, but she blames herself for her mother’s condition.

Here’s where we hit the real meat of the story, because this is where Charlie stops just being Dean’s bro, and becomes his friend. He gets that pain. He knows it, and for once in his life he’s able to actually say the sane thing here, and tell her to let her mother go.

Now, it could seem rather reductionist, and even annoying, that I keep referring to Charlie’s developmental arc through the lens of Dean’s friendship, but I don’t think it is. All characters on a show, or in a story at all, serve a purpose. The main character is the thing that drives the story forward, and all the other characters exist in relation to her. In this case, Sam and Dean are the main characters, and it makes sense that all the other characters are included in the story because of the influence, good or bad, big or small, that they have on our heroes.

Charlie makes a big impact on Dean. And therefore she’s worth talking about.

That’s seriously it. And it’s very hard, as it turns out. Dean kind of sucks at it. 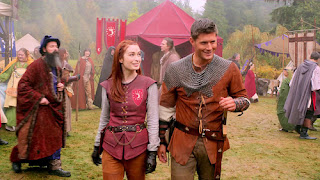 Charlie is a huge step in that story. She’s a sign of Dean’s growing emotional maturity, that he can have a female friend, and that he can love her and value her input in his life. She’s a friend he doesn’t sexualize, with whom there is no expectation. He can actually be himself with her, and she can be herself with him. That’s huge.

It’s easy to write a character whose life gets progressively worse and whose relationships continue to deteriorate, but it’s a lot harder to write about a character who learns from his mistakes and who slowly learns how relationships are supposed to work. And who comes to actually value the people around him.

So why is she a strong female character? Because Charlie changed the reality of the show to suit herself. When she appeared, the Winchesters didn't have friends, especially not female ones. And now they do. It's really as simple as that. Charlie Bradbury showed up, and things changed. What could be cooler than that?

The power of friendship. That’s what Charlie gives Dean. Along with a really kickass sword and some armor and a medieval battle to fight in. And that’s why she matters.