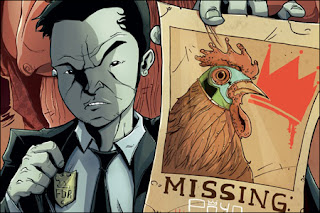 Chew is weird even for an indie comic, and that’s really saying something. Despite the weirdness, though, the story is deep, complex, and actually, surprisingly, complex.

But let me explain first why this is surprising.

Chew, as stated above, is an independent comic, which pretty much means one without superheroes (or at least superheroes we recognize as such), that isn’t published by Marvel or DC Comics, or Dark Horse (let’s be real, they aren’t indie anymore). Written by John Layman with art by Rob Guillory, the comic manages to strike a balance between revolting horror, slapstick comedy, and touching emotional drama. And somehow it doesn’t suck.

The story itself…well, the main character is…the world it takes place in? I’ll be honest, the whole thing is so out there it’s hard to know where to start even explaining this, but I’ll try.

Chew takes place in an alternate reality where the avian flu was more than just a money suck, and actually caused millions of deaths, along the lines of the Spanish flu. Now, three years later, all poultry has been outlawed as a foodstuff, and really in general. Our main character, Tony Chu, works for the country’s most powerful governmental agency: the FDA. 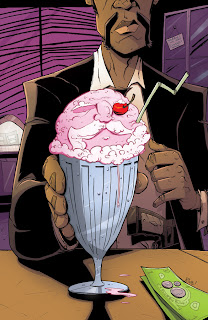 Now, here’s where stuff starts getting weirder. Tony Chu isn’t just a government employee, he’s a damn good one. In large part this owes to his tenacious commitment to law and order, but the rest of it is because of his special abilities. Tony is cibopathic, which means that he can get the complete history of anything he eats. Like, whether the tree that it grew on was sprayed with pesticides, if the worker who picked it was documented or not, how it was transported, if the price was raised arbitrarily. Everything.

Except from beets. Beets are apparently the psychic null food. So Tony eats a lot beets.

When it comes to investigating, this power is actually priceless. Tony can eat anything and get a read on it. Like a dead body in a murder investigation. Not only can he take a chomp and immediately know what happened, he knows who did it and why, where it took place, and what all of them ate for lunch. He’s a very good detective, and the book is pretty gross to read.

Additionally, there are more special people than just Tony in this world. There are several other cibopaths, as well as a saboscrivner (can write about food so realistically you can taste it), a guy who can sculpt chocolate (and only chocolate) crazy accurately – like make a working M-16 out of a load of Hershey bars accurate – and a woman who can see the future of anyone she bites, as long as they’re alive. And there are a couple of cyborg characters and one seriously badass rooster. (Poyo!)

Okay, so I hope you’re getting an idea of what I meant when I said it was a little kooky. The storylines get increasingly bizarre with each issue, including but not limited to: investigation of a space plant that tastes like chicken that takes Tony to a small island dictatorship, a “Vampire” that eats other people with special abilities, Thanksgiving dinner at the Chu house, and even Poyo the Rooster as an international special agent.

It's not all just weirdness, though. A huge amount of the story actually revolves around how the world has adapted in the face of a universal poultry ban. If everything tastes like chicken, what do you do when you aren't allowed to eat chicken? The social commentary really kicks in here, with everything from chicken speakeasies for the rich and shameless, to fake chicken products made from alien plants and terrifyingly engineered frog-chicken hybrids (fricken or chogs, take your pick), to a terrorist group called E.G.G. They get a lot of mileage out of this story device, and it really serves the plot well. 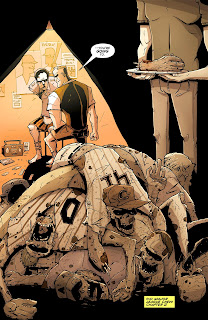 The reason I even feel like mentioning it here, though, aside from securing my nerd cred (which hardly needs help), is because at its heart Chew is about one man trying to uphold the law, live a good life, and keep the people he loves safe. It actually has a relatable core, and that’s all you actually need, it seems.

No, seriously. Think about it. Chew’s plot and world and characters are labyrinthine and insane and seriously hard to remember. The book even knows that and each issue it does a little reminder of who people are and what their history is and what their abilities are. Because you will forget. Because it is confusing.

Normally, I hate that. I really can’t stand the idea that a show is so complicated that the reader isn’t even expected to hold it all in their head. But here I don’t really mind, and I think that really does come down to the emotional core of the story. Tony Chu might be kind of quiet and more than a little moody, but you relate to him. He’s awkward and isolated, but to be fair, only being able to eat beets would do that for you. He loves his girlfriend. He loves his sister and his trigger-happy cyborg partner. He especially loves his (SPOILER ALERT) sullen teenage daughter and the sister who begrudgingly raises her.

Tony Chu is a good guy. And with that heart at the base of all of the stories, it’s really not hard to get emotionally invested in a world of cibopaths and saboscrivners. Well, it’s a little hard. But it’s worth it.

So pick up Chew if you’re willing to have your mind bent around for a while, have a strong stomach (or just haven’t eaten recently), and want to read some stories about aliens and chicken and an impossibly cool Rooster conquering Hell itself. 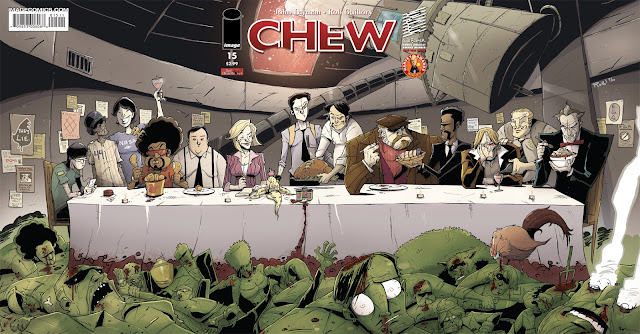