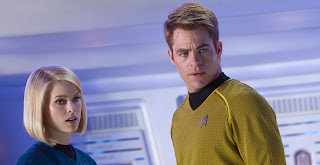 I never like to think of myself as a killjoy, but I have to admit that I didn’t actually enjoy the most recent Star Trek film. Or rather, I did enjoy it, but I didn’t enjoy it as a Star Trek movie, and that makes me sad.

As a matter of fact, the movie I think is most similar to classic Star Trek, the ethos espoused by Gene Roddenberry, is actually Pacific Rim. And I’m not just saying that because I really really liked it. Even though I did really really like it. As I’m sure you all can tell.

But no, I have better reasons than that, as well as reasons why, despite the eminent watchability of Star Trek: Into Darkness, I do not think it was a good movie. Or rather, not a good Star Trek movie. I’ve got a fair number of reasons for thinking this, but there’s really only one that’s super important.

Star Trek was always about hope. Roddenberry was very clear about that. In Star Trek, we see a gleaming future for mankind. We’ve gotten our crap together. We’ve stopped trying to kill each other. We’re past the point of worrying about disease or race or gender, and now we’re on a mission not to colonize the world around us, but to learn about it. To explore. To boldly go. 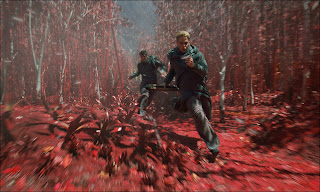 I’m not saying this is the most realistic prediction in the world, because it’s not. I would even go so far as to argue that the sheer unreality of this future is what makes it important. Just because it’s nearly impossible to imagine a future where we’ve moved on as a species and we are being all we can be, doesn’t mean we shouldn’t. It means we should try even harder to envision that bright day.

Star Trek gave us an ideal future, where the best and brightest of our planet, regardless of race or gender or physical fitness, were sent out to the stars not to conquer or rule but to learn and explore and tell stories about what they found. I love Star Trek because this is what I want us to aspire to. And I didn’t like Into Darkness because it seems like we forgot that.

For those of you who didn’t see Star Trek: Into Darkness in theaters, here’s a brief recap. The film followed the events of the 2009 Star Trek movie, which as you may recall rebooted the franchise. In this installment we catch up with the USS Enterprise and her crew as they are exploring and carrying out missions for Starfleet. The film starts with Kirk (Chris Pine) and Spock (Zachary Quinto) accidentally causing mayhem and breaking the prime directive (not to interfere with any life they find out there in space), and being called by to Starfleet Command to be punished.

Kirk gets demoted down from being Captain of the Enterprise, and Spock gets reassigned, and as an audience you’re actually quite curious about where the story will go from here.

And then Khan shows up, played by Benedict Cumberbatch, and he blows up a Starfleet archive, then attacks the heads of Starfleet, and it’s all gunfights and violence and explosions for a while.

Which was entertaining, I guess, but it was really, well, weird.

For sure, Khan has always been a violent character. But the thing is, that was the point of his character. Khan was a relic of an earlier, more brutal age. By the time we reach Starfleet, people don’t really deal with violence on a day to day basis anymore. You can see this in the simple fact that in old Trek, the security officers don’t have guns, they have phasers. Phasers set to stun. Violence happens, but it’s always shown to be shocking and unnecessary.

So it was a little weird to see a gunfight in a Star Trek movie. But moving on. Khan runs away to another planet, and Kirk goes on a mission of revenge after him, intending to blow the guy to kingdom come with all of the kajillion missiles he brings along. Then the story sort of goes from there. Carol Marcus makes an appearance, played by Alice Eve, and shows off her boobs, which is unnecessary and tonally dissonant. Uhura (Zoe Saldana) and Spock needlessly debate their relationship during work hours, which flies in the face of both of their prior characterizations. Admiral Marcus is hyper-violent and intent on causing a war. Khan is white. Blegh.

Suffice to say that the movie, entertaining though it was, kept making my heart sad for a very simple reason. It wasn’t a Star Trek movie. Oh, it wore the clothes and said the words, but this wasn’t a movie about humanity at its best. This was a movie about violence and destruction, and it was a movie that did not sufficiently explain why those things are bad.

So, cut to Pacific Rim. Like I said before, this is a movie that actually is about people banding together, putting aside their differences, and fighting for the good of humanity. Its characters truly care about people and each other. The violence is not unnecessary or gratuitous; it’s about human survival. It’s about hope.

The characters represent us at our best as well. One of the major problems I had with Into Darkness was their marginalization of one of the key principles of old Star Trek, the inclusion of people of different races and genders into the upper echelons of power. With the decision to make Khan white (in the original story he is from Pakistan, and in the old series he was played by a Hispanic actor, Ricardo Montalban, because it was significant to make a genetically superior being have brown skin), the film neutered itself. It became about white men arguing with other white men. 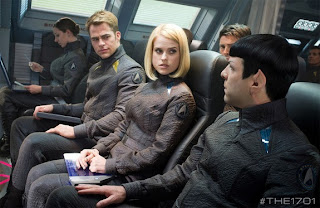 It wasn’t just about the racial politics, either. In the old series, Uhura (Nichelle Nichols, who helped create the role) was notable for her independence and professionalism. In Into Darkness, Uhura is defined by her relationship to a white male lead, Spock, and only ever referred to in that context. Her professionalism is removed, and her agency is diminished to the point of non-existence. The only other female character in the film, Carol Marcus, is reduced to a spate of daddy issues, made a vessel for uncomfortable flirting, and needlessly ogled in her underwear.

Contrast, again, with Pacific Rim, where the two main female characters are both fighters who make their own choices, and have those choices respected. Where the command structure of the Jaeger program is not only not wholly white and male, there’s only one white guy in the command team. The real leaders of the program are all people of color, men and women.

But really what bothered me was the hope. Into Darkness, it didn’t feel like a movie about hope. It felt cold, almost. Cynical. It seemed to say that the impossible dream of a world where Starfleet cares more about learning than fighting is a silly thing to hope for. That we as people will always turn towards our basest instincts. And that may be true. But. I’d rather not believe it.

I would rather watch Pacific Rim. I choose to hope, and I don’t care if that hope is stupid or unrealistic. I’m pretty sure that without my hope the world would suck a lot more. We have to hope for something better, you see. Because if we don’t, then we say that it’s okay. That the violence and the frustration, and the grossness of humanity as we are are okay. They’re good enough. They’re the best we can do.

I would rather hope for better.