Who Decides the Future? (Kingdom Come) 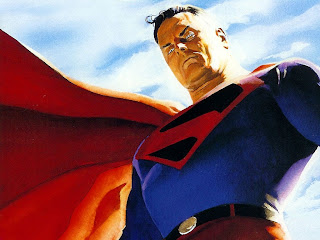 I don’t read a whole lot of superhero comics in my daily life, and when I do I tend to gravitate towards Marvel, for pretty obvious reasons already elucidated all over this blog. So I was surprised by Kingdom Come, which isn’t just DC, it’s hardcore DC, featuring all of their major characters and quite a few of their minor ones.

But I wasn’t just into it because the story is good, or the art is beautiful, or because it won all these shiny awards.

I love Kingdom Come because it asks a really pertinent question: Who decides the future of the human race?

The basic story of this comic, which originally appeared as a crossover mini-series in 1996, follows the dissolution of world order as the superheroes who hold our planet together descend into in-fighting and all out war. It takes place years after Superman, Wonder Woman, and Batman have all retired from their original posts, and their successors have taken over. Only these heirs to the superhero throne are more super than hero, and they aren’t doing a very good job.

The world is consumed by superhero fights, with different factions raging for control of certain cities, new supervillains popping up every week, and a shocking lack of regard for the people down below. 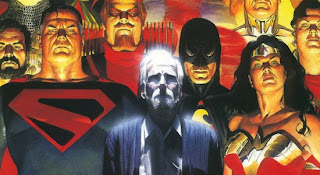 In a world gone mad, who will save us? Superman’s dealing with issues of his own morality and his place on this planet. Wonder Woman is gripped with frustration at the world, and believes that she was too soft on their heirs before. She decides that martial law is needed. And Batman is just kind of crazy.

Frustrating all of this are the humans, led by Lex Luthor, of course, who believe rather understandably that all these metahumans are killing the human race and something must be done about it. It's a brilliant point because it's not entirely wrong. But it fails for a simple reason: it demands the elimination of the superhero threat.

Oh, and then there's the superheroes who think that the world would be much better with fewer people in it. Or at least if regular humans had a lot less control. And, weirdly, that's a group that includes Superman and Wonder Woman. They flagrantly ignore the UN's attempts to talk when they take off and decide to just fix this themselves. They're so focused on fixing their little part of the problem that they can't save all of it.

No, the actual savior in this story is a man. A normal man. A man so normal his name is Norman. Norman McCay, to be specific. It's about Norman and a superhero, talking.

Norman is a minister, just some ordinary dude, who receives visions of the apocalyptic future about to hit our planet. He is taken by The Spectre, who demands that Norman pass judgment on our world and determine its fate. They travel throughout the world, flashing into events as they occur, and watching the world go down in flames. At every turn The Spectre demands that Norman pass judgment. That he say something about the miseries around him. That he decide. Norman’s story is the one that ultimately matters.

Or, if you’re like Marvel, you take the different route. You make the story about how people look down on superheroes. How their powers make them freaks. How humans should be the ones making the rules about superheroes. And that isn’t good either, obviously.

The problem, either way, is that someone is taking responsibility that they shouldn't. One side is consuming the other, and someone always gets shafted. In this story, it's the superheroes, who are both taking too much responsibility, placing the world in their own hands, and getting screwed, by refusing to let anyone else share the burden.

What makes Norman’s story compelling is that it isn’t just Norman passing judgment, nor is it just The Spectre. It’s about both of them. It’s about the two sides coming to an understanding and working together for the first time. It’s about compromise. And, in the end, it's not about passing judgment at all. It's about understanding that there's no need to do that in the first place. And it's about realizing that the worst possible option is to do it alone.

There’s so much awesome stuff in this miniseries that it’s a little daunting to try to explain it all here, but trust me when I say you should pick it up. It’s a story where Superman is reminded of what it means to be human, where Wonder Woman learns that soft doesn’t mean weak, and where Batman is Batman at things. There’s murder, meta-human civil war, and xenophobia, and redemption, peace, and reconciliation.

And also romance. This is the story where Superman and Wonder Woman finally give in to their noble tension and get hitched and have a baby. No, seriously. You think this recent run was the first time those two got together? Not even close.


But most of all, there’s a normal guy talking to a superhero about what it all means. 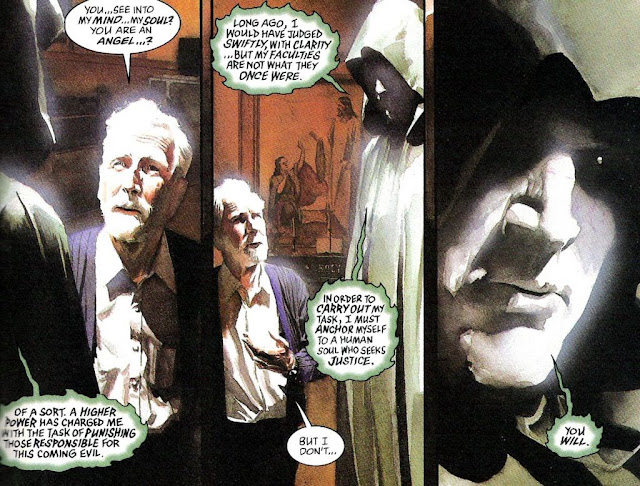