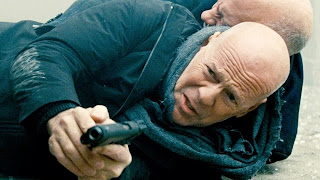 It’s always tragic when a sequel isn’t nearly as good as the original. Not necessarily surprising, mind, since it’s very hard for lightning to strike twice, but still sad all the same. You cherish the original more for being good. And you rewatch the sequel occasionally to remind yourself of why the original really is better.

Unless we’re talking Terminator or Godfather movies. Then it’s vice versa. Not that the first movies in either of those franchises are bad, just that they’re not quite as good as the second. And the third movies don’t bear talking about.

This all, of course, brings us to RED 2, which came out a few weeks ago and attempted to cash in on the same sleeper hit feeling of the original RED. Both movies are based on the same comic series, also called RED, and pull their storylines pretty directly. This is not the problem I have. We’ll get to that in a moment.

RED stands for “Retired, Extremely Dangerous”, and is the fictitious designation given to our heroes in the movie. In the first film, we meet a cohort of retired spies, American, British, and Russian, who all still have the skills to make it in a young man’s world, but have been pushed out of their agencies due to ageism. The movie was a clever sendup of the idea that retirement is a necessary evil, and pointed out deftly that some things really do get better with age. Like an ability to fire an automatic weapon, or knowing all the places to hide a body. 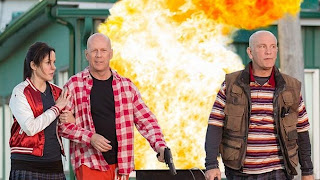 So the first movie is good. Really good. It stars Bruce Willis as Frank Moses, a retired CIA agent who gets reinvolved in the life when he’s blamed for a crime he didn’t commit. He and the woman he’s been flirting with over the phone (Sarah, played by Mary Louise Parker) become targets of a governmental manhunt, and have to go on the run to clear their names.

It’s doubly funny because Sarah’s a bored government employee who reads action adventure books for fun, and actually enjoys the hell out of their terrifying experience.

The other characters are equally entertaining and surprising. Morgan Freeman plays a nursing home lothario with great aim. John Malkovich comes in as a tactical genius and demolitions expert, who might be completely and totally insane due to being secretly dosed with LSD for ten years. Brian Cox plays a Russian diplomat who used to be a KGB spy. Helen Mirren is MI-6’s best agent, and always armed to the teeth.

Oh, and Karl Urban is the upstart CIA agent trying to catch them all, because it’s his job on the line if they can’t contain their rogue elements, and all the evidence suggests that Moses and his crew are actually guilty. 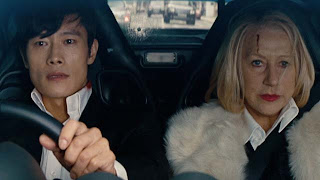 Now we come to the sequel. It’s less fun. Unfortunately.

The sequel picks up a couple years after the original, it seems, with Frank and Sarah settling calmly into retired life. Frank’s enthusing about the joys of grilling, while Sarah begs him for something more adventurous in their life. It’s a fun dynamic, actually, but one that gets a little repetitive.

Their lives are interrupted by the appearance of Marvin (John Malkovich’s character), who insists that yet again they’re in grave danger. Someone is trying to set off a secret nuclear device hidden in Moscow, and they’re getting the blame. Again.

So they all go on the run. Again. This time, though, Victoria (Helen Mirren) has been contracted to kill them, as has another newcomer, Han (Byung-hun Lee). As they attempt to clear their names, our heroes have to go abroad to Paris, where they meet up with Frank’s KGB ex-girlfriend, Katja (Catherine Zeta-Jones), and hijinks ensue.

When I say that hijinks ensue, what I really mean is that the plot of this movie is so inconsequential and hard to follow that there’s really no point in trying. It’s fun, sure, but not particularly logical. They have to go to Paris to find out who leaked the documents that implicated them, then get a safety deposit key from him to see the full papers, then figure out who fabricated them, then break a criminal out of jail and follow him around Moscow until he figures out where the bomb is… It gets tiresome. 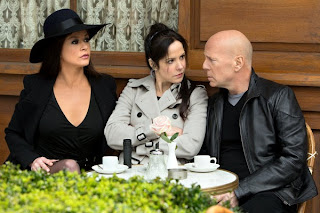 Worst of all, the movie is full of twists and crosses and moments of confusion that are funny at first but ultimately turn into a baffling blur where you cease being able to remember anyone’s allegiance to anything.

Also, it was disappointing to see yet another movie with ample opportunity to have great female characters and make them really deep and interesting squander that by only ever having them discuss the male love interest. Victoria's complexity was gutted, and she was just a grown-up femme fatale. Sarah was turned into a clumsy cliche, and Katja just made me sad.

But the real problem I have with the movie is actually quite simple: it didn’t feel right. I know that sounds simplistic, and more than a little silly, but hear what I’m saying. I mean that the movie was emotionally inconsistent. That it never really felt like it was saying what it meant to say. For lack of a better word, it was just “off”.


By off, I mean that this was the Ocean’s 12 to the original’s Ocean’s 11. You know? Because Ocean’s 11 was such a clever, clean movie. And then 12 came along, and it had all the same faces, and then some, and it had the same idea, but it absolutely sucked.

That’s what this is like. Complete with random escapades around Europe. 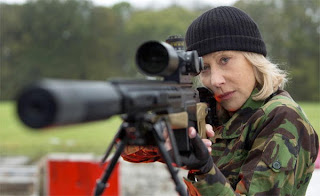 What makes it really stink, aside from the loose plot and bloated cast, though, is that RED 2 isn’t really about anything. I mean, yes, there’s the relationship angle, but that makes very little sense from an emotional standpoint, and most of the characters’ actions are both illogical and inconsistent. And even with that as the core, the movie is still missing something bigger. A real theme, something to make it hum.

The first film had just that. It was about being old and not being done. The idea that even though you’ve aged and you’re supposed to be retired, and everyone thinks you have nothing left in you, you can still be a force to be reckoned with. It was about taking the respect you deserve. And it was good.

It worked not only because that's a compelling and intriguing story, but also because it mirrored what was happening with the actors' careers. Like their characters, these actors are older. They've been around for a while and everyone agrees that they're the best. But people still push them to retire. This movie was the push back. Why retire when you're at the top of your game?

This second film, though, is about love, I guess. Maybe. How you shouldn’t try to force your partner to be safe when she doesn’t want to be? I’ll be honest, I’m not sure.

I wanted to like this movie. I wanted it a lot. Because the first movie is so good. It’s clever and funny and makes a really salient, interesting point. But unfortunately, the sequel fails because it doesn’t understand why the original worked. It’s just a bunch of funny actors and set pieces and foreign locations all strung together in the hopes of recreating box office magic.

That’s cynical. And it sucks.

And it makes for a pretty bad movie.